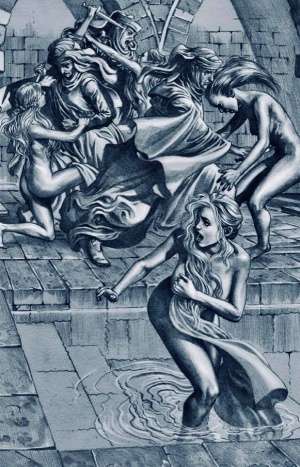 The attempted assassination of Alysanne Targaryen at Jonquil's Pool, as depicted by Douglas Wheatley in Fire & Blood.

Jonquil's Pool is a famed sweetwater pool in the town of Maidenpool. A bathhouse has been constructed around it.[1] "Six Maids in a Pool" is a song about the water.[2]

The great stone bathhouse surrounding the spring-fed pool[3] is maintained by an order of holy sisters from the Faith of the Seven. Men are forbidden from entering the structure and its waters.[1]

According to legend, Florian the Fool first saw Jonquil and her sisters bathing[2] in the spring-fed pool[3] during the Age of Heroes.[4] The waters are said to be blessed with healing properties.[1] The town of Maidenpool is named after the water,[2] and centuries ago House Mooton built a stone bathhouse around the pool.[1]

King Jaehaerys I Targaryen and his sister-wife, Queen Alysanne Targaryen, visited Maidenpool during a royal progress in 51 AC. Since Alysanne was pregnant with her brother's child, some of the holy women objected to their incestual marriage and believed their waters would become polluted if the queen and her unborn "abomination" were to enter them. When she entered the bathhouse, Alysanne was accompanied only by her maids and septas, the Wise Women, while Ser Joffrey Doggett and Ser Gyles Morrigen of the Kingsguard waited outside.[1]

Three of the holy sisters suddenly attacked Alysanne with daggers as she disrobed. The queen was not harmed due to the courage of her naked and unarmed ladies, who did not hesitate to protect and shield her. Septa Edyth and Prudence Celtigar were wounded by daggers, and Rosamund Ball was stabbed in the belly and died three days later. The shouts alerted the Kingsguard outside, who entered and slew two of the attackers, sparing the third for questioning. The remaining assassin revealed the names of six more in the order who had helped plan the assault. The guilty were hanged by Lord Mooton, who was convinced by Alysanne to spare the innocent.[1]

In response to the attack, the royal couple postponed their progress to the Vale of Arryn and returned to Maegor's Holdfast. Jonquil Darke was called to court as Alysanne's sworn shield. The queen gave birth to Aegon Targaryen, but the premature prince died three days after being born. Alysanne believed that her newborn would have lived if she had been allowed to bathe in Jonquil's Pool.[1]

Maidenpool is sacked three times during the War of the Five Kings.[5] When Ser Jaime Lannister, Brienne of Tarth, and Ser Cleos Frey visit the town, Jonquil's Pool is filled with corpses and its waters appear a murky grey-green.[2]

Care for a bath, Brienne? You're a maiden and there's the pool. I'll wash your back.[2]