From A Wiki of Ice and Fire
(Redirected from Khal Drogo)
Jump to: navigation, search

Drogo is a powerful khal or warlord of the fearsome Dothraki nomads. Daenerys Targaryen is promised to him at the beginning of A Song of Ice and Fire.

In the television adaptation Game of Thrones, Drogo is portrayed by Jason Momoa.[4]

Like most Dothraki, Drogo has copper-colored skin, black hair, and black eyes. He is tall and muscular, and moves gracefully. He has a long, drooping moustache and a long braid hung with tiny bells that hangs down to his thighs, symbolizing his status among the Dothraki as an undefeated warlord.

Drogo's favorite horse is a lean red stallion, unnamed, as it is not a Dothraki custom to give individual names to animals.

Drogo's father was Khal Bharbo. Cohollo was pledged to the khalakka, or prince, while he was still a child, and saved young Drogo's life from sellswords on one occasion.[1]

From an early age Drogo was an extraordinarily gifted warrior even among the fierce Dothraki; before the age of thirty he led a khalasar forty thousand strong, the largest on the Dothraki sea. He has never been defeated in battle. Cohollo, Qotho and Haggo serve him as bloodriders.

Drogo owns a palace in the sacred Dothraki city of Vaes Dothrak. He also possesses a nine-towered manse in Pentos, given to him by the city's ruling magisters as part of their policy of bribing the Dothraki not to loot the city.[2] 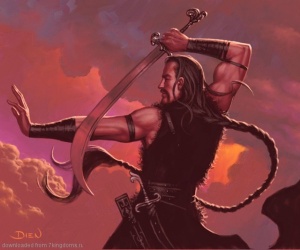 Magister Illyrio Mopatis, serving as patron to the exiled Viserys and Daenerys Targaryen, arranges a marriage between Princess Daenerys and Khal Drogo during one of Drogo's visits to Pentos. In return for his bride, Drogo is to provide ten thousand Dothraki warriors for her brother's campaign to retake the Iron Throne.[2]

The wedding takes place in the traditional Dothraki fashion, with Drogo's entire khalasar gathering in a field outside Pentos for a day-long feast, punctuated with several deadly fights and couples having intercourse in the open. In accordance with tradition, Drogo's bloodriders offer fine weapons - a whip, an arakh, and a dragonbone bow - to the new khaleesi, who then gives them to her husband. Drogo's own gift to his bride is a magnificent silver mare. 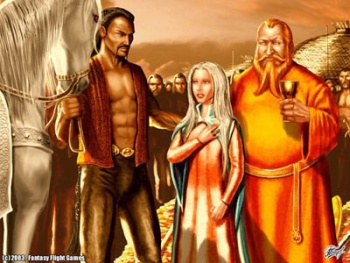 Drogo presents his bride gift, the Silver, to Daenerys, by Amok ©

Finally Drogo leads Daenerys off to consummate the marriage. A thirteen-year-old girl who had been abused by her brother for most of her life and had been given no say in the marriage, Daenerys is terrified of her bridegroom and expects to be raped. Despite his fierce reputation, however, Drogo proves to be a surprisingly considerate lover. Although he and Dany share no common language, he establishes that he understood the word "no," then begins touching her gently, trying to arouse her. He does not begin to have intercourse with her until Dany expresses her approval and initiates it.[5]

This tender wedding night sets the tone for their marriage, which becomes a remarkably happy one. As Daenerys' new role as khaleesi takes her out of her abusive brother's control, she begins to leave behind the timid, passive girl she had been, blossoming into a strong, confident young woman and a natural leader. As Dany learns to speak the Dothraki language, Drogo proves a quick study at picking up the Common Tongue of Westeros, though he retains his accent. He addresses Dany affectionately as "moon of my life," while she calls him "my sun and stars." Drogo treats her with respect and values her opinions; although he does not understand or share her objections to the traditional Dothraki practices of raping and enslaving conquered peoples, Drogo supports Dany when she orders his warriors to cease, delighted by his wife's growing courage.[6] The pair grow to love one another deeply. Drogo's relationship with Viserys, however, is not nearly as felicitous. While Daenerys is respectful of Dothraki culture and eager to learn about and embrace it, her brother shows nothing but contempt for the Dothraki "savages" and is increasingly impatient for the aid Khal Drogo had promised him. The issue finally came to a head when Viserys breaks the ancient taboo against bloodshed in Vaes Dothrak by drawing his blade and threatening the life of Daenerys and her unborn child, demanding his crown. Drogo cunningly sidesteps the prohibition against spilling blood in the sacred city by announcing that Viserys will have the crown of gold he deserves, then upends a pot of molten gold over his head, killing him.

In Vaes Dothrak the women of the dosh khaleen proclaim that Drogo and Daenerys's unborn child will be the stallion who mounts the world, a prophesied leader in Dothraki legend.[7] Drogo has little interest in invading Westeros, a land that holds nothing in particular that the Dothraki want and is located across the sea, which they have always feared. However, he reconsiders after an assassin tries to kill Dany and claim Robert Baratheon's reward. Enraged by the attempt on his wife's life, Drogo reaffirms his commitment to conquer the Seven Kingdoms for her sake and seat their son on the throne of her ancestors.[8] He pillages several towns in Lhazar to harvest slaves to exchange for warships that will take his horde across the sea. While in Lhazar, Drogo's khalasar defeats the rival khalasar of Khal Ogo. Drogo slays Ogo himself, but takes a wound to the chest.[6] 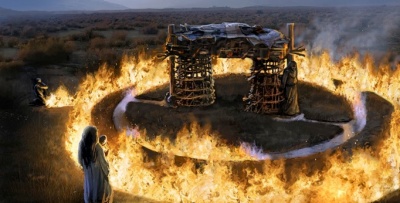 Drogo's funeral pyre, by Kim Pope, for Game of Thrones

Though Drogo is unconcerned with his minor wound, Daenerys convinces him to let Mirri Maz Duur, a Lhazareen maegi she had rescued, make him a poultice. The poultice itches, and Drogo tears it off, causing the wound to fester. Drogo's condition deteriorates until he falls from his horse, a symbolic event in Dothraki culture that indicates he is no longer fit to lead. As he lingers near death, Daenerys convinces Mirri Maz Duur to use her blood magic to preserve his life by sacrificing his stallion.[9] The maegi betrays her in revenge for the attack on her village, and the ritual only returns Drogo to a catatonic state, while causing their child to die in Daenerys' womb. Realizing that Drogo would never return to his former state, Dany smothers him with a pillow and builds him a funeral pyre as his khalasar breaks apart. She burns his body on the pyre along with Mirri Maz Duur and enters the flames with her petrified dragon eggs. The flames magically trade life for life, killing the maegi and hatching the three dragons while leaving Daenerys unharmed.[10]

Dany names her black hatchling dragon Drogon in honor of the memory of her husband.

In Vaes Tolorro, after talking with Ser Jorah Mormont about some of his past and his second wife, Daenerys realizes that he desires her. She also realizes that she does not feel that way about him and her thoughts turn to Drogo. She thinks to herself,

Khal Drogo had been her sun-and-stars, her first, and perhaps he must be her last. The maegi Mirri Maz Duur had sworn she would never bear a living child, and what man would want a barren wife? And what man could hope to rival Drogo, who had died with his hair uncut and rode now through the night lands, the stars as his khalasar?[11]

That night no ghosts trouble her sleep. She dreams of Drogo and the first ride they had taken together on the night they were wed. In the dream it is not horses they rode, but dragons.[11]

In Meereen Dany closes her eyes and prays to the gods,

Gods, you took Khal Drogo, who was my sun-and-stars. You took our valiant son before he drew breath. You have had your blood of me. Help me now, I pray you. Give me the wisdom to see the path ahead and the strength to do what I must to keep my children safe.

Before her wedding to Hizdahr zo Loraq in Meereen Daenerys Targaryen thinks to herself that she should be eager with anticipation for her wedding and the night that is to follow. Dany remembers the night of her first wedding, when Khal Drogo had claimed her maidenhead beneath the stranger stars. She remembers how frightened she had been, and how excited. She asks herself will it be the same with Hizdahr? … but she knows in her heart that she is not the girl she was, and he is not her sun-and-stars.

This seller of poisons ran from the moon of my life. Better he should run after her. So he will. Jhogo, Jorah the Andal, to each of you I say, choose any horse you wish from my herds, and it is yours. Any horse save my red and the silver that was my bride gift to the moon of my life. I make this gift to you for what you did. And to Rhaego son of Drogo, the stallion who will mount the world, to him I also pledge a gift. To him I will give this iron chair his mother's father sat in. I will give him Seven Kingdoms. I, Drogo, khal, will do this thing. I will take my khalasar west to where the world ends, and ride the wooden horses across the black salt water as no khal has done before. I will kill the men in the iron suits and tear down their stone houses. I will rape their women, take their children as slaves, and bring their broken gods back to Vaes Dothrak to bow down before the Mother of Mountains, as the stars look down to witness.[8]

[...] my sun-and-stars made a queen of me, but if he had been a different man, it might have been much otherwise.[12]