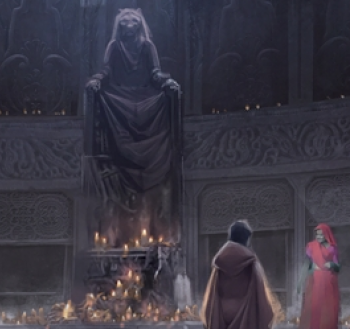 The Lion of Night is a god in Yi Ti. The Faceless Men believe that he is just another representation of the Many-Faced God.[1] There is a statue of it in the House of Black and White which is most commonly visited by rich men.[2]

According to tales told by the priestly scribes of Yin, the Lion of Night fathered a son on the Maiden-Made-of-Light. This son was the God-on-Earth, who ruled the Great Empire of the Dawn for ten thousand year before ascending to the heavens. The descendants of the God-Earth ruled the empire after him, each ruling a shorter time than the previous one, until the brother of the Amethyst Empress usurped her in the Blood Betrayal and crowned himself as the Bloodstone Emperor, ushering in the Long Night. The Maiden-Made-of-Light turned her back upon the world and the Lion of Night came forth in all his wroth to punish the wickedness of man.[3]

The Five Forts, which predate the Golden Empire of Yi Ti, are claimed by some to have been raised by the Pearl Emperor to keep the Lion of Night and his demons away from the realms of men.[3]

When first entering the House, Arya Stark notes the statue of a man with a lion's head seated on a throne, carved from ebony.[4]