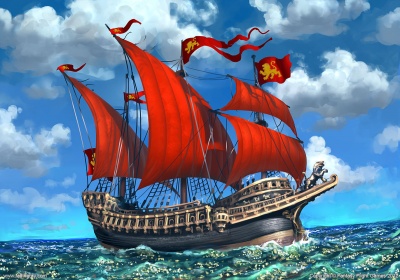 The Lionstar - by Lukasz Jaskolski. © FFG

The Lionstar is a war galley in service to the royal fleet at King's Landing.[1] Its hull is painted the black and gold of House Baratheon of King's Landing, while its figurehead is a lion with an upraised paw.[2]

The Lionstar is part of the fleet Tyrion Lannister sends to bring Myrcella Baratheon to Braavos. The captains have orders to run off or destroy any lone ship they spot on the way. Should an enemy fleet attack, the Bold Wind would escort the Seaswift while the rest of the fleet, consisting of King Robert's Hammer, Lionstar, and Lady Lyanna, would give battle.[1]

When the fleet of Stannis Baratheon enters the Blackwater Rush before the start of the Battle of the Blackwater, Ser Davos Seaworth notes the absence of the Lionstar, King Robert's Hammer and the Lady Lyanna, making him suspect a trap, as these ships should lead any defense of the enemy.[3]

The Lionstar transports Rhaegar, Ser Jared, and Symond Frey to White Harbor to deliver the remains of Ser Wendel Manderly, who was killed at the Red Wedding, and to negotiate House Manderly abandoning the northern cause and bending the knee to the Iron Throne and King Tommen I Baratheon. On the way, the ship makes a stop at Sisterton to fill its water casks and the Freys are guests of Lord Godric Borrell. Godric informs Davos of this when the Onion Lord arrives in Sisterton twelve days later.[4]

Davos hopes that the ship sank in the same storms that destroyed Salladhor Saan's fleet. However, when he arrives in White Harbor on board the Merry Midwife to negotiate a possible alliance between Lord Wyman Manderly and Stannis, Davos spots the Lionstar lying in the harbor. Its banner displays the Baratheon and Lannister arms of King Tommen I. This increases Davos's doubts whether he can succeed in his mission.[2]