From A Wiki of Ice and Fire
(Redirected from Lords of Harrenhal)
Jump to: navigation, search Lord of Harrenhal or Lady of Harrenhal is the title held by the noble seated at the castle of Harrenhal since Aegon's Conquest. Due to the many misfortunes its lords met with,[1][2] Harrenhal is now believed to be a dark place, and cursed as well.[3][1][4][5][6][7] 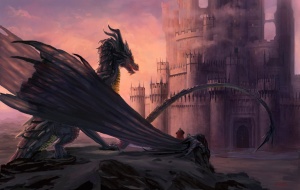 The castle of Harrenhal was constructed on the orders of Harren Hoare, the last King of the Isles and the Rivers, who ruled over the Iron Islands and the riverlands. It took almost forty years to build the castle. On the day of its completion, Aegon Targaryen landed on the shores of Westeros, beginning his Conquest.[8] Aegon eventually arrived at Harrenhal, where he offered Harren the Black a chance to surrender. The king refused, so at evenfall, Aegon and his dragon, Balerion, descended on the castle, burning everything that was flammable with dragonflame, and even melting the stone with which the castle had been built with.[8] Harren and his sons died in the burning of Harrenhal at the tower which afterwards became known as Kingspyre Tower.[9] It is said by some that the ghosts of Harren and his sons still haunt the castle.[9]

Ser Quenton Qoherys, the master-at-arms at Dragonstone, was made Lord of Harrenhal by King Aegon I following the death of Harren.[10] In 9 AC, Quentyn died from a fall from his horse and was succeeded by his grandson, Gargon, who quickly gained a bad reputation for taking advantage of the lord's right of the first night. In 37 AC, Gargon was killed by the rebel Harren the Red, who claimed to be a grandson of Harren the Black. After killing Gargon, Harren declared himself to be the Lord of Harrenhal. Harren was slain in battle later that year.[10][11]

Harrenhal was then granted to House Harroway.[11] In 44 AC, King Maegor I Targaryen had Lord Lucas Harroway, the Hand of the King, and his entire family killed, including Queen Alys, Maegor's own wife. At both Harrenhal and Lord Harroway's Town, Maegor subsequently killed every man, woman, and child with a drop of Harroway blood.[11] 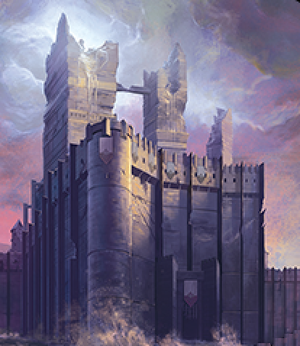 After the extinction of the Harroways, Maegor allowed twenty-three knights of his household to fight for the rights to the castle. The victor was Ser Walton Towers, who was named Lord of Harrenhal but died of his wounds from the battle within a fortnight, after which his eldest son, Jordan, inherited the seat.[11]

Lord Jordan remained a loyal bannerman to Maegor throughout the king's reign, and was one of the last people to see Maegor alive before his mysterious death upon the Iron Throne in 48 AC.[11] Jordan was one of the few lords loyal to Maegor who were brave enough to stay, and he yielded the Red Keep to Prince Jaehaerys Targaryen when he arrived to claim the Iron Throne. Jordan was sent to the black cells, but was eventually pardoned by King Jaehaerys after surrendering some of his lands.[12] Jordan died of a chest congestion in 53 AC, after which Harrenhal passed to his last surviving son, Maegor.[13]

Lord Maegor occupied only the Tower of Dread, living in his castle with only a cook and three men-at-arms. He later accepted the presence and friendship of Queen Rhaena Targaryen in 56 AC. After Maegor died in 61 AC, Rhaena took in Maegor's household servants and continued to live in the Widow's Tower until her own death in 73 AC.

After Rhaena's death, the lordship was granted to Ser Bywin Strong, the brother of Ser Lucamore Strong of the Kingsguard.[13]

House Strong held Harrenhal throughout the remainder of the reign of King Jaehaerys, and throughout the reigns of kings Viserys I and Aegon II Targaryen. Following the death of Lord Lyonel Strong, along with his eldest son and heir, Ser Harwin, in a fire at Harrenhal in 120 AC, the lordship passed to his younger son Lord Larys Strong,[14] who continued to hold the title despite losing the castle temporarily to Prince Daemon Targaryen during the Dance of the Dragons.[15] Larys, the Lord Confessor and master of whisperers, was executed by the King's Hand Lord Cregan Stark during the Hour of the Wolf in 131 AC.[16]

In 151 AC Prince Viserys Targaryen convinced his brother, King Aegon III Targaryen, to bestow Harrenhal upon Ser Lucas Lothston, the master-at-arms at the Red Keep.[17][10] Lord Lucas "the Pander" Lothston and his son Manfryd were renowned for their black deeds.[18] Manfryd is said to have betrayed Daemon Blackfyre in the First Blackfyre Rebellion.[19]

In 212 AC Lady Danelle Lothston led Lothston men-at-arms when Lord Brynden Rivers, the King's Hand to Aerys I Targaryen, marched in great strength on the wedding tourney at Whitewalls to quash the Second Blackfyre Rebellion.[20] During the reign of King Maekar I Targaryen, Lady Danelle turned to the black arts, which ended the line of the Lothstons in madness and chaos.[10]

Harrenhal was granted to House Whent for their role in defeating the Lothstons.[10] Lord Walter Whent hosted the great tourney at Harrenhal in 281 AC.[21] 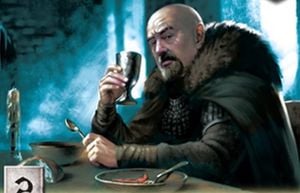 During the early stages of the War of the Five Kings, Lady Shella Whent yields Harrenhal to Lord Tywin Lannister, who holds it with his own troops.[22] Tywin's daughter, Queen Regent Cersei Lannister, grants the castle to Janos Slynt in return for his service.[23]

Tywin's son Tyrion, acting as Hand of the King in his father's stead, revokes Janos's lordship and sends him to the Wall.[4]

When Tywin departs Harrenhal, he names Ser Amory Lorch as its castellan.[24] Vargo Hoat betrays Amory, however, and his Brave Companions participate in the fall of Harrenhal to Lord Roose Bolton.[25]

Harrenhal is awarded to Lord Petyr Baelish by King Joffrey I Baratheon following the Battle of the Blackwater, to reward Petyr for his role in securing an alliance between the Lannisters and Tyrells.[7]

Vargo hopes to turn his captive, Ser Jaime Lannister, over to Lord Rickard Karstark and be rewarded with the hand of Alys Karstark and the safety of distant Karhold.[26] Lord Karstark is executed by Robb Stark for treason, however.[27] Roose explains to Jaime that Vargo had betrayed Tywin earlier in the war in return for being named Lord of Harrenhal by Roose.[26] When Roose marches north to the Twins, Vargo remains at Harrenhal.[28] In the aftermath of the Red Wedding, Ser Gregor Clegane leads the capture of Harrenhal from the Brave Companions.[29]

Though he has never set foot within Harrenhal's walls, Petyr remains its titular lord. His position as the Lord of Harrenhal has elevated Petyr's social position enough to marry Lysa Arryn, the widowed Lady Regent of the Vale of Arryn.[30][31]

Janos continues to call himself Lord of Harrenhal despite having joined the Night's Watch.[32]

Vargo is reported to have died at Harrenhal.[33]

As Petyr is in no haste to occupy his seat, Jaime travels to Harrenhal, replacing the castle's garrison with the pious regiment known as the Holy Hundred. Jaime appoints their leader, Ser Bonifer Hasty, as castellan until Petyr comes to claim his castle.[34]

Janos is beheaded at Castle Black for refusing to follow the orders of Jon Snow, Lord Commander of the Night's Watch.[35]

Houses who have held Harrenhal

Harrenhal has been held by multiple Houses over the past three centuries. All have met with misfortunes,[1][2] leading to the castle's cursed reputation: 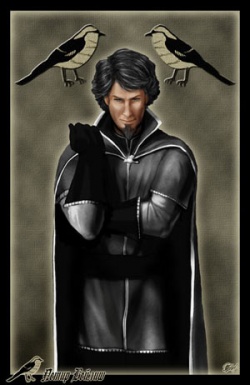 The known Lords and Ladies of Harrenhal are:

In addition, during 37 AC, the rebel Harren the Red claimed the title Lord of Harrenhal after killing Lord Gargon Qoherys.[11] Queen Rhaena Targaryen took Lord Maegor Towers's servants into her household after his death, and there was no formal Lord of Harrenhal until Rhaena's own death.[13]

During the War of the Five Kings, Lord Roose Bolton takes Harrenhal from the Lannisters. Although the Crown grants the castle to Lord Petyr Baelish, Roose grants the castle to Vargo Hoat, the leader of the Brave Companions.[26][28] Vargo goes mad with fever after a bite wound caused by Brienne of Tarth becomes infected,[28][29][33] and he is eventually imprisoned and mutilated by Ser Gregor Clegane.[29][33][34]

Whose notion was it to make this Janos Slynt a lord? The man's father was a butcher, and they grant him Harrenhal. Harrenhal, that was the seat of kings! Not that he will ever set foot inside it, if I have a say. I am told he took a bloody spear for his sigil. A bloody cleaver would have been my choice.[3]

Harrenhal and all its lands and incomes. With a stroke, you'd make me one of the greatest lords in the realm.[6]

Roose: Lord Vargo abandoned House Lannister because I offered him Harrenhal, a reward a thousand times greater than any he could hope to have from Lord Tywin. As a stranger to Westeros, he did not know the prize was poisoned.


Jaime: The curse of Harren the Black?

Sansa: Curses are only in songs and stories.
Petyr: Has someone made a song about Gregor Clegane dying of a poisoned spear thrust? Or about the sellsword before him, whose limbs Ser Gregor removed a joint at a time? That one took the castle from Ser Amory Lorch, who received it from Lord Tywin. A bear killed one, your dwarf the other. Lady Whent's died as well, I hear. Lothstons, Strongs, Harroways, Strongs ... Harrenhal has withered every hand to touch it.[2]

No traitor's bastard gives commands to Janos Slynt! I am not without friends, I warn you. Here, and in King's Landing too. I was the Lord of Harrenhal! Give your ruin to one of the blind fools who cast a stone for you, I will not have it. Do you hear me, boy? I will not have it![35]