From A Wiki of Ice and Fire
(Redirected from Loren Lannister)
Jump to: navigation, search

Loren I Lannister, called Loren the Last, was the last King of the Rock and the head of House Lannister at the time of Aegon's Conquest. He submitted to the rule of House Targaryen after surviving the Field of Fire, and became the first Lord of Casterly Rock and Warden of the West.[1]

Having taken up arms against Aegon the Conqueror alongside the King of the Reach, Loren I and King Mern IX Gardener are remembered collectively as the Two Kings.[3]

Prior to Aegon's Conquest, Loren oversaw a brief period of peace with the Kingdom of the Reach.[4] After Aegon the Conqueror landed on Westeros, and set about conquering the Seven Kingdoms, Loren used the peace between their kingdoms to make an alliance with Mern IX Gardener, the King of the Reach. The Two Kings joined their hosts at Goldengrove in the northern part of the Reach.[3] 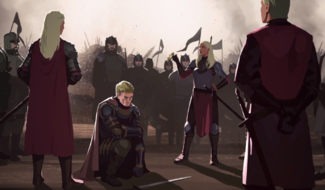 Loren the Last bends the knee, as depicted in Game of Thrones History and Lore.

Commanding the mightiest host in the history of the Seven Kingdoms, the armies of the Two Kings met Aegon's smaller host in the plains south of the Blackwater Rush. As Mern IX brought more men than Loren I, he commanded the center while Loren and his knights formed the right. The combined might of the Reach and the west broke Aegon's formation of spearmen. However, Aegon and his sisters, Visenya and Rhaenys Targaryen, took to the sky with their dragons. Near four thousand men on the Field of Fire died that day, including Mern. Loren rode through fire and smoke once he realized the battle was lost.[3]

Loren was captured the following day. After he submitted to the Targaryens, Aegon the Conqueror named Loren as Lord of Casterly Rock and Warden of the West.[5][6] Loren's actions led his bannermen to yield to House Targaryen.[3] According to legend, Visenya was grateful that Loren had ridden to war instead of remaining within Casterly Rock, as she felt the seat of House Lannister would have been able to withstand even dragonflame.[7]

Aegon called upon his new followers to aid him against the northern host of Torrhen Stark. Once at the Trident, however, the King in the North submitted as well instead of opposing Aegon by force.[3] After the submission of the Iron Islands, some suggested for the ironborn to be made vassals of the Lannisters.[8]

The Queens Visenya and Rhaenys arranged marriages between noble houses from all over the Seven Kingdoms, hoping to unite the realm. One of these marriages was the union between Loren's eldest son and heir with a noblewoman from House Redwyne of the Arbor.[2]

Throughout the reign of Aegon the Conqueror, Casterly Rock had the honor of hosting the king numerous times during his royal progresses.[2] While the vast wealth of House Lannister remained untouched, Loren did not have close relations to House Targaryen and was too proud to scrabble for a place of prominence under the Iron Throne. As such, the Lannisters did not have a significant impact on the realm during the course of Loren's lifetime.[9] 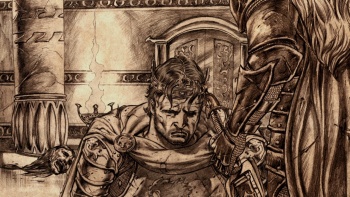 Loren bends the knee, from Game of Thrones Blu-ray

Tyrion Lannister is grateful his ancestor chose to bend the knee and live.[6]

Loren had several sons, and his eldest son was wed to a Redwyne of the Arbor.[2] According to Tyrion Lannister, Loren did not have a son until after his submission to Aegon the Conqueror,[6] and Maester Yandel writes that Lord Lyman Lannister ruled a generation after Lord Loren.[9]