Mag Mar Tun Doh Weg, called Mag the Mighty, is something of a chieftain among the giants.[3] In the television adaptation Game of Thrones he is portrayed by Neil Fingleton.

Mag the Mighty has a grey pelt streaked with white. His mouth is full of huge square teeth. His laughter sounds like a rumbling belch.[1] The giant speaks the Old Tongue.[1] Mag is smaller than Wun Weg Wun Dar Wun.[4]

Mag's mammoth has the same coloring and is larger than other mammoths, denoting its older age.[1]

Mag leads the giants who are allied with Mance Rayder's host of free folk. Tormund explains to Jon Snow that Mag is not a king.[1]

During the battle beneath the Wall, Mag the Mighty leads the assault on the gate at Castle Black, tearing off the outer door of studded oak. Within the tunnel, Mag is struck by a dozen crossbow quarrels and stabbed by spears. Despite the defending Night's Watch, Mag is able to wrench the bars and chains of the iron gate and tear off the head of Spotted Pate of Maidenpool. Although Mag crushes the spine of the last defender, Donal Noye, the one-armed armorer drives his sword into Mag's throat. It is unknown who dies first.[2]

Despite Tormund's explanation, Jon thinks of the late Mag as a king of the giants.[2][5] Jon and Tormund drink mead to honor Mag and Donal during a parley.[6] 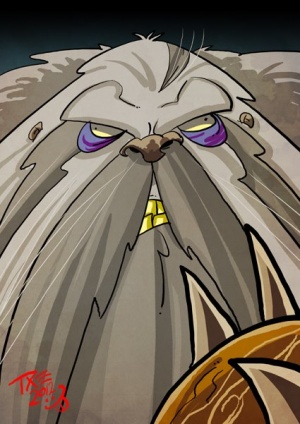 Mag the Mighty by The Mico

Jon: Was that their king?
Tormund: Giants have no kings, no more'n mammoths do, nor snow bears, nor the great whales o' the grey sea. That was Mag Mar Tun Doh Weg. Mag the Mighty. You can kneel to him if you like, he won't mind. I know your kneeler's knees must be itching, for want of some king to bend to. Watch out he don't step on you, though. Giants have bad eyes, and might be he wouldn't see some little crow all the way down there by his feet.[1]

Tormund: Mag himself went in that gate o' yours and never did come out.


Jon: He died on the sword of a brave man named Donal Noye.
Tormund: Aye? Some great lord was he, this Donal Noye? One of your shiny knights in their steel smallclothes?
Jon: A blacksmith. He only had one arm.
Tormund: A one-armed smith slew Mag the Mighty? Har! That must o' been a fight to see. Mance will make a song of it, see if he don't. This will warm us some. To Donal Noye, and Mag the Mighty.


Jon: To Donal Noye, and Mag the Mighty.[6]
—Tormund and Jon Snow