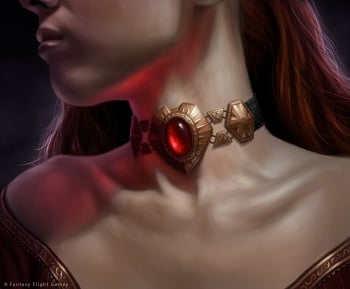 Melisandre's ruby is a single great ruby[1][2] gemstone belonging to Melisandre of Asshai, a red priestess of R'hllor. It ornaments a red gold choker that is tighter than any maester's chain.[1] The ruby choker is always worn at Melisandre's throat.

The ruby often gleams red, glimmers,[3] glows,[4] shimmers redly,[1] pulses with light,[2] or throbs.[5][6] Melisandre sometimes touches the ruby at her neck.[3] When she works magic, the ruby glows with power,[5] and it may be able to burn her if the magic worked is particularly demanding.[7]

When Melisandre drinks the poisoned wine that Maester Cressen had given her, she remarks that "fire cleanses", while the ruby at her throat shimmers. The strangler poison has no effect on her.[1]

There is a great square-cut ruby set in the hilt of Stannis Baratheon's sword, Lightbringer.[8]

While sailing to back to Dragonstone, Ser Davos Seaworth is reminded of Melisandre's ruby when he sees the watchtower of Sharp Point.[9] 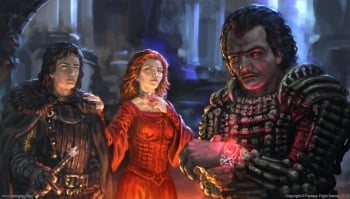 At the Wall, Jon Snow often notices Melisandre's ruby gleaming at her throat.[3][2]

Melisandre remembers that when the flames were burning Rattleshirt glamoured as Mance,[2] the ruby at her throat had grown so hot that she feared her own flesh might start to smoke and blacken. She is thankful that Jon delivered her from that agony when he ordered "Mance" to be shot with arrows, Rattleshirt's death causing her to shudder with relief.[7]

Melisandre was seated near the fire, her ruby glimmering against the pale skin of her throat.[3]

Her eyes were two red stars, shining in the dark. At her throat, her ruby gleamed, a third eye glowing brighter than the others.[4]

Melisandre felt the warmth in the hollow of her throat as her ruby stirred at the closeness of its slave.[7]

Melisandre of Asshai stood closer to the fire, the ruby at her throat pulsing with every breath she took.[10]