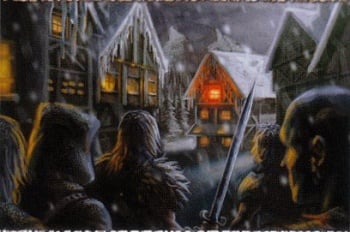 Three-quarters of the Mole's Town lies beneath ground in deep damp warm cellars connected by a warren of tunnels. Mole's Town brothel is located in the cellars, with nothing on the surface but a wooden shack no bigger than a privy, with a red lantern hung over the door.[1]

The Mole's Town brothel is regularly frequented by the Brothers of the Night's Watch. It is said that brothers go to Mole's Town to dig for "buried treasure", euphemism for going to Mole's Town to drink, unwind and engage the services of whores. They are breaking their vows but this particular kind of oathbreaking is ignored as Lord Commanders know some men find it impossible to be celibate and after they are done with the whores the men will return to the Wall and their duties.[1]

On the Wall Jon Snow hears men refer to the whores in Mole's Town as buried treasures.[1]

While trying to desert the Night's Watch and join his brother Robb Stark in secret, Jon sees the light of the Mole's Town brothel and wonders whether any of his brothers in black are down there tonight, mining. He thinks to himself that that is oathbreaking, yet no one seems to care.[1]

Prior to the great ranging the grounds of Castle Black seem deserted with so many rangers off at the Mole's Town brothel, digging for buried treasure and drinking themselves blind.[2]

Grenn has also gone to the brothel with the rest of the men. Pyp, Halder and Toad offered to buy him his first woman to celebrate his first ranging. They want Jon and Samwell Tarly to come as well, but Sam is almost as frightened of whores as he is of the haunted forest, and Jon wants no part of it, telling Toad "Do what you want, I took a vow". [2]

Zei, a whore from the brothel, helps in the defense of Castle Black.[3]