Moondancer was a young she-dragon, ridden by Lady Baela Targaryen.[1]

Moondancer was a slender pale green. Her horns, crest and wingbones were pearl. She was very quick, both in the sky and on the ground.[2][3][4] Although in 129 AC Moondancer was not yet considered large enough to carry the thirteen-year old Baela Targaryen upon her back, a year later Baela was able to mount the dragon. At the time, she was no larger than a warhorse and weighed less.[5][4] 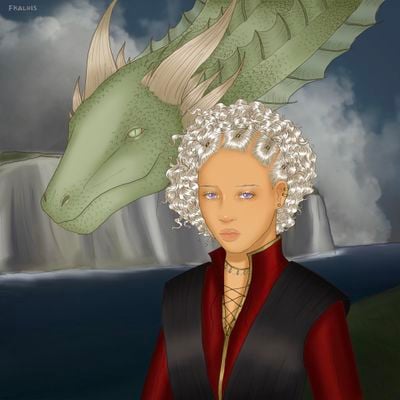 Baela and Moondancer, by Fkaluis.

Moondancer remained at Dragonstone with her rider, Lady Baela Targaryen, for most of the first two years of the Dance of the Dragons. When Dragonstone fell to Aegon II Targaryen, Baela was able to evade capture by escaping from her bedchambers as the door was being smashed down. She managed to reach Moondancer in the stable, loosed the dragon's chains and strapped a saddle onto her. As Aegon II flew Sunfyre over Dragonmont's smoking peak, planning to land triumphantly in the courtyard of the castle, Baela and Moondancer rose up to meet.[4][1]

The two dragons fought fiercely in the air. The younger, smaller Moondancer was far more nimble than the half-crippled Sunfyre, and she managed to evade his flames, jaws, and claws for a time, while at the same time wounding Sunfyre heavily on his back and malformed wing. Moondancer was blinded when a blast of Sunfyre's flames hit her directly in the eyes. Despite the fire, Moondancer advanced on Sunfyre, slamming into him and falling to the ground with him. Although both dragons survived the fall, upon the ground Moondancer's speed could not defeat Sunfyre's size and weight. The younger dragon was eventually killed by Sunfyre.[4]

Moondancer's carcass was devoured by Sunfyre. Nonetheless, Moondancer had succeeded in mortally wounding her opponent. Sunfyre died in the last month of the year from wounds received during the battle.[4][1][3]