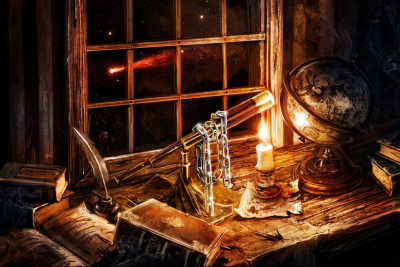 A Myrish eye[1][2] or Myrish lens tube[3][4] is a telescope consisting of a bronze tube with ground glass lenses at either end. They include larger devices which can be attached to tripods for observatories[5] and smaller monoculars useful for sailors.[2] A Myrish eye can be called a far-eye,[3] although George R. R. Martin also refers to human lookouts,[6][7] such as sailors in a ship's crow's nest,[8] as far-eyes.[9]

Polished lenses might come from other Free Cities,[10] but the lenscrafters of Myr are considered without equal.[5][11] Maesters Luwin and Aemon have both used far-eyes to observe the stars.[5][1]

Maester Luwin receives a new lens from Myr for his observatory at Winterfell.[5] After Robb Stark calls the banners, Bran Stark watches the Karstarks arrive through Luwin's bronze far-eye.[3] Luwin uses it to study the red comet, and Rickon Stark uses the device to look at the gargoyles on the First Keep.[12]

During the battle beneath the Wall, Jon Snow uses Maester Aemon's lens tube on a heavy tripod from atop the Wall to observe the camp of Mance Rayder.[1]

A lens is an instrument to help us see.[5]

Her captain owned a Myrish eye that made far-off things look close—two glass lenses in a series of brass tubes, cunningly wrought so that each section slid into the next, until the eye was no longer than a dirk. Victarion claimed that treasure for himself.[2]