Mysaria, also called Lady Misery, was a dancer from Lys who became the paramour of Prince Daemon Targaryen and the unofficial mistress of whisperers to Queen Rhaenyra Targaryen during the Dance of the Dragons.[1]

In the television adaptation House of the Dragon, Mysaria is portrayed by Sonoya Mizuno.[4]

Mysaria had skin pale as milk. She was lithe and lissome in her youth, but age thickened her body.[1] Because of her appearance and reputation, Mysaria was dubbed Misery, the White Worm by enemies and rivals.[2][5][6]

While serving as mistress of whisperers, Mysaria wore a hooded robe of black velvet lined with blood-red silk.[1]

While a dancing girl in King's Landing, Mysaria became the favored lover of Prince Daemon Targaryen.[2] Around 105 AC, Mysaria became pregnant with Daemon's child while living at Dragonstone. Daemon gave his paramour a dragon egg for the child, which angered King Viserys I Targaryen. The king ordered Daemon to return the egg and send Mysaria back to Lys. On her return to the Free City, she lost the child during a storm on the narrow sea.[2]

During the Dance of the Dragons, Prince Daemon Targaryen desired revenge for the death of his stepson, Prince Lucerys Velaryon. With a pale stranger used as a go-between, two assassins, Blood and Cheese, infiltrated the Red Keep and killed Prince Jaehaerys Targaryen, the eldest son of King Aegon II Targaryen. Under torture, Blood admitted that he had been hired by a pale older woman called Misery by harlots. The gold cloaks were unable to find Mysaria or Cheese, however.[5][7]

Mysaria became Daemon's mistress of whisperers at some point.[6] After the fall of King's Landing to Rhaenyra, Mysaria served as the queen's mistress of whisperers in all but name, although she did not join the small council. Rhaenyra apparently approved of Daemon sleeping with Mysaria each night.[1] According to Mushroom, Mysaria stopped Rhaenyra from having Queen Alicent Hightower's tongue ripped out, instead proposing that the Dowager Queen and Queen Helaena Targaryen to be taken to a certain brothel so they would be forcibly impregnated with bastard offspring. Archmaester Gyldayn discounts Mushroom's claim, however.[1]

Following the First Battle of Tumbleton, Mysaria informed Rhaenyra that Daemon had been sleeping with Nettles, his fellow dragonrider, at Maidenpool. Rhaenyra ordered the death of Nettles, but Lord Manfryd Mooton disobeyed the command. Nettles disappeared on Sheepstealer, while Daemon flew on Caraxes to Harrenhal to await a confrontation with his nephew.[1]

After Lord Corlys Velaryon was imprisoned for warning Ser Addam Velaryon of his impending arrest under charges of treason, two of the Sea Snake's sworn swords, Ser Denys Woodwright and Ser Thoron True, planned to free their lord. Mysaria learned of the plan from a whore Thoron had been bedding, however, and the two knights were promptly arrested and hanged. Septon Eustace suggests that Helaena Targaryen jumped to her death after being informed by Mysaria of how her son, Prince Maelor Targaryen, had been killed at Bitterbridge.[3]

During the riot of King's Landing, Mysaria warned Rhaenyra against the coming dark. When Rhaenyra ultimately fled the capital, Mysaria remained at the Red Keep among other members of the court. Mysaria was taken while attempting to flee after Ser Garth the Harelip surrendered the Red Keep to Ser Perkin the Flea and his gutter knights. Perkin informed Mysaria that if she could travel naked through the city to the Gate of the Gods while being whipped, she would be allowed to live. Mysaria only made it half way before dying on the city's cobblestones.[3]

Lord Brynden Rivers was said to have rivaled Lady Misery as a master of whisperers.[8] 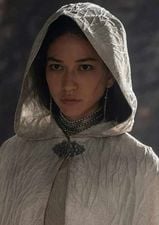 Mysaria in House of the Dragon

House of the Dragon

The television series House of the Dragon interprets various events that are disputed in the historical record. In the show, Mysaria's supposed pregnancy at Dragonstone is presented as a lie that Daemon made up as part of an attempt to provoke his brother, also writing to the small council that he would take her as his second wife in the custom of Old Valyria. She did not know of this until Ser Otto Hightower arrived at Dragonstone for the egg, and was deeply upset that Daemon put her life in danger.[9]

The other harlots called her Misery.[5]

Let Daemon slake his hungers where he will, and we shall do the same.[1]