Nightfort
The north and the location of the Nightfort

The Nightfort was the first of the abandoned castles of the Night's Watch along the Wall, the only one whose steps up the side of the Wall were carved into the ice.[1] It sits between Icemark to the west and Deep Lake to the east.[2] The Nightfort figures in some of Old Nan's scariest stories.[1]

According to maesters who served at the Nightfort, the castle was rebuilt many times over thousands of years, with only deep stone vaults remaining from its first form.[3]

The abandoned Nightfort has broken towers and a maze of tunnels connecting its vaults and tunnels. Buildings include a bell tower, a rookery, a brewhouse, a library, a dungeon capable of holding five hundred prisoners, a bathhouse, an armory, and a forge. The rat-filled great hall only has one remaining wall. The kitchen is a stone octagon with a domed roof and contains a stepped well.[1]

Its yards have become small forests, a twisted weirwood grows through a hole in the kitchen, and there are also trees growing in the stables. The gate through the Wall is sealed with frozen stone and rubble.[1]

The magical Black Gate is a hidden subterranean gate that allows passage to the other side of the Wall and is as old as the Wall itself. It is set deep in a wall of the well at the center of the kitchens and is made of white weirwood with a face on it. The face is old, pale, shrunken, and wrinkled with white eyes. The door glows.

When someone approaches the Black Gate, the eyes open. They are white and blind, and then the door asks, "Who are you?" A man of the Night's Watch must repeat a part of his vow, "I am the watcher on the walls. I am the fire that burns against the cold, the light that brings the dawn, the horn that wakes the sleepers. I am the shield that guards the realms of men." The door will open then, saying, "Then pass." The door's lips open wider and wider still until nothing remains but a great gaping mouth in a ring of wrinkles.[1] 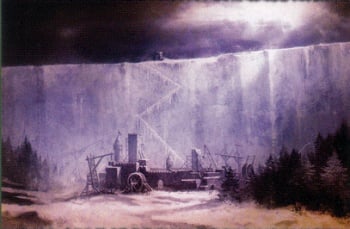 The Nightfort was the largest castle on the Wall, and the oldest, being twice as old as Castle Black.[1] Chronicles from the Nightfort described the ancient war at Sea Dragon Point of the Kings of Winter, the Starks of Winterfell, against the Warg King and the children of the forest.[4]

The Nightfort is remembered in scary stories of the north dating back thousands of years. It was there that the Night's King reigned before his name was wiped from the memory of man, and where the Rat Cook served an Andal king (Tywell II Lannister or Oswell I Arryn)[5] his prince-and-bacon pie. It is where the seventy-nine sentinels stood their watch, where brave young Danny Flint was raped and murdered, and where King Sherrit called down his curse on the Andals of old. The Nightfort is where apprentice boys faced the thing that came in the night, where blind Symeon Star-Eyes saw hellhounds fight, and where Mad Axe walked the yards and climbed the towers to butcher his brothers in the dark.[1] Some stories are described in Archmaester Harmune's Watchers on the Wall.[3]

Three hundred years before Aegon's Conquest, the commanders of the Nightfort and Snowgate went to war with each other. Eventually, both lost their heads to the Stark in Winterfell.[6] At some point rangers from the Nightfort sealed the tunnel of Arson Iceaxe.[7]

With the dwindling of the Night's Watch's power, the Nightfort had become three-quarters empty and too costly to maintain. Benton Glover escorted Alysanne Targaryen from Castle Black to the Nightfort during the queen's visit to the Wall in 58 AC. Alysanne convinced Lord Commander Lothor Burley that the Nightfort, which she found unpleasant, should be abandoned for a new and smaller castle. The new castle, Deep Lake seven miles to the east, was paid for by the queen's jewels. The Nightfort was abandoned during the construction of Deep Lake and its last brothers were reassigned to Deep Lake.[1][8] Bran Stark, Hodor, and Meera and Jojen Reed arrive at the Nightfort to go beyond the Wall. Bran, remembering Old Nan's stories, is frightened of the ruins, but Jojen reassures him it is not dangerous. Meera climbs the ice steps to look from atop the Wall.[1]

Following the battle beneath the Wall, Stannis Baratheon tells Sam he intends to make the Nightfort his wartime seat.[9]

Jon Snow, the new Lord Commander of the Night's Watch, gives the Nightfort to Stannis after he demands it as payment for assisting with the wildling attack on the Wall.[10]

After Jon cedes the Nightfort to Stannis, it is discovered that it will take half a year to make it fit for habitation.[11] Disliking Eastwatch-by-the-Sea, Queen Selyse Florent arrives at Castle Black on her way to occupy the Nightfort.[12] Othell Yarwyck and his builders are sent by Jon to restore the castle.[13]

It is so huge the men seem dwarfed by it, like mice in a ruined hall, and there is a darkness there ... a taste in the air ... I was so glad to leave that place.[8]

—Alysanne Targaryen to Jaehaerys I Targaryen

There are ghosts here.[1]

The Wall offered few of the comforts that southron ladies and little highborn girls were used to, and the Nightfort offered none. That was a grim place, even at the best of times.[14]

Chapters that take place at the Nightfort