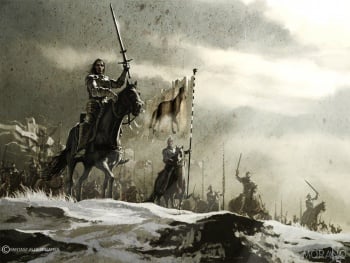 Respect of the Old Gods. © FFG 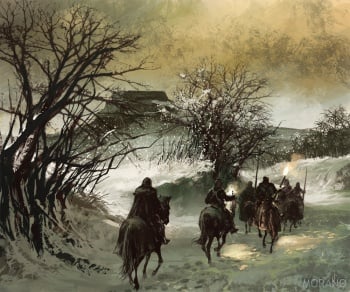 Northern cavalry are horse-mounted warriors of the north.

Because few northerners follow the Faith of the Seven, they rarely choose to become knights. However, the warrior tradition of the north is similar to that of knighthood. Heavy cavalrymen in the north serve a nearly identical function to knights south of the Neck, and are considered knights in all but name.[1]

There are some northerners, such as Ser Bartimus, who are knights but still follow the old gods instead of the Seven.[2]

To be a knight, you must stand your vigil in a sept, and be anointed with the seven oils to consecrate your vows. In the north, only a few of the great houses worship the Seven. The rest honor the old gods, and name no knights ... but those lords and their sons and sworn swords are no less fierce or loyal or honorable. A man's worth is not marked by a ser before his name.[3]

The men of the winterlands are made of iron and ice, and even my boldest knights fear to face them.[4]

Those who follow the old gods can be the northern equivalent of knights, but it's not quite the same.[5]