The Northern mountains[1] are a range of mountains inhabited by clans in the northwestern part of the north.

Jon Snow describes the mountains as located west of the kingsroad and south of the Gift.[2] The Lands of Ice and Fire depicts the spine of the mountains as extending north from Winterfell in the south through the Gift as far as the Shadow Tower and the Gorge. Beyond the Wall the mountains transition into the Frostfangs. A large forest separates the northernmost mountains from Castle Black to the east along the Wall. In the west, the foothills of the mountains reach the Bay of Ice. Farther south, the flint foothills of the eastern mountains roll past the kingsroad to the forest of the Last Hearth. The wolfswood extends west and east of the southern mountains. The sources of the Last River and Long Lake are found in the mountains.[3]

The mountains have deep, blue lakes and numerous piney woods. The foothills have russet and gold autumn leaves, but the mountains themselves have grey-green sentinels, spruce, fir, and soldier pines. The hills contain fish in streams and small game, but wildlife is scarcer in the mountains. Other animals include owls, eagles, and pale goats,[4] as well as the herds[2] and shaggy garrons[5] of the clans. There are no roads,[4] with the only paths little more than goat tracks.[2]

The clans have lands and holdfasts throughout the region.[6] Separately Highpoint, the seat of House Whitehill in Game of Thrones - A Telltale Games Series, is located in the south of the mountains where they meet the northern wolfswood, north of Winterfell and west of Long Lake.[7] 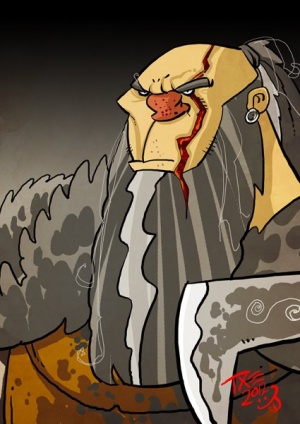 Theo Wull, by The Mico

The Northern mountains are inhabited by clans who live at fastnesses[8] in the high valleys and mountain meadows.[2] There are two score mountain clans, large and small, and they are proud followers of the old gods.[2]

The most powerful of the clans are the Wulls,[1] who live to the west along the Bay of Ice.[4] The Harclays reside in the hills near the wolfswood and Winterfell.[4] The First Flints, the Knotts, the Liddles, and the Norreys dwell in the high places,[4] with the Norreys living closest to the Gift.[2] The Burleys are also a prominent clan.[4] Separate from the clans, the Umbers graze their sheep in the high meadows in summertime.[4]

The mountains are sometimes raided by wildlings from beyond the Wall,[9] while the shores of the Bay of Ice have historically been raided by ironborn.[1]

Songs about the mountains and their people include "Black Pines" and "Wolves in the Hills".[1]

The Starks of Winterfell have sometimes sent men into the mountains to settle disputes between clansmen.[1]

The party of Jon Snow and Tyrion Lannister travels on the kingsroad from Winterfell to Castle Black. West of the road they see grey and rugged flint hills guarded with tall watchtowers. Five days north of Winterfell, they see jagged, snow-covered mountains, blue and grey in color, forming a wall to the west.[10]

Rather than take the kingsroad to the Wall, Bran Stark and his companions travel through the northern mountains, which have no roads among their twisted valleys. They pass a granite upthrust as large as Winterfell. Bran explains the clansmen know of their presence, but will not bother them unless they try to take their goats or horses. The only person they meet is a Liddle taking shelter from freezing rain in a shallow cave.[4]

Maester Aemon sends ravens to the mountain fastnesses of the clans to request aid against Mance Rayder.[8]

Following the advice of Jon Snow, who also provided sure-footed garrons,[2] Stannis Baratheon travels to the mountains, gains the northern mountain clans for his cause, and frees Deepwood Motte in the wolfswood.[11]

Old Flint and The Norrey tell Jon they do not want wildlings to settle on their lands.[9]

Meera: Up and down, then down and up. Then up and down again. I hate these stupid mountains of yours, Prince Bran.


Bran: Yesterday you said you loved them.


Meera: Oh, I do. My lord father told me about mountains, but I never saw one till now. I love them more than I can say.[4]
—Meera Reed and Bran Stark

The old gods are strong in those mountains. The clansmen will not suffer insults to their heart trees.[2]

The moon was almost full, the night so clear she could see the mountains, their peaks crowned with snow. Cold and bleak and inhospitable, but beautiful in the moonlight. Their summits glimmered pale and jagged as a row of sharpened teeth. The foothills and the smaller peaks were lost in shadow.[11]

It has always been a harsh life up there. When the snows fall and food grows scarce, their young must travel to the winter town or take service at one castle or the other. The old men gather up what strength that remains in them and announce that they are going hunting. Some are found come spring. Most are never seen again.[12]