Old Men of the River

From A Wiki of Ice and Fire
Jump to: navigation, search
This article is about the species of giant turtles. For the Rhoynish deity, see Old Man of the River. 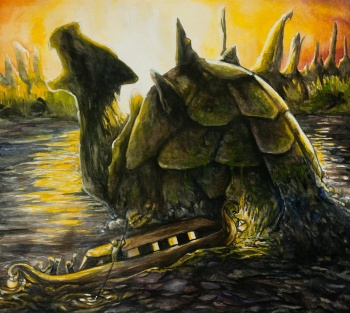 A huge horned turtle, one of the Old Men of the River, which Yandry believes is the Old Man of the River himself.
Art by Puppy-Chow.

The Old Men of the River are a species of gigantic turtle that live in the river Rhoyne. They are held sacred by the Rhoynar as the consorts of Mother Rhoyne.[1]

According to legend, the first of the Rhoynish Wars, the First Turtle War, began when Valyrians killed one of these gigantic turtles.[1]

When the Shy Maid sails down the Rhoyne at Ny Sar, they see an exceptionally huge horned turtle, which comes to the surface and bellows at them. Tyrion judges it to be bigger than their boat. Ysilla says they are blessed to see it, and Yandry declares it to be the Old Man of the River, not just any turtle but the actual god that gives its name of the turtles.[2]