Olenna Tyrell,[3][7][8] née Redwyne,[1][2] is the widow of Lord Luthor Tyrell and the mother of Mace Tyrell, Lord of Highgarden. Born into House Redwyne of the Arbor, she is commonly known as the Queen of Thorns because of her sharp tongue.[9] In the television adaptation Game of Thrones she is portrayed by Dame Diana Rigg. 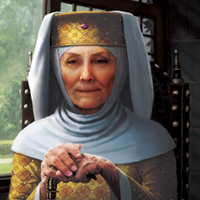 Lady Olenna is a small woman,[3] the size of a child.[10] The white-haired lady appears wrinkled[8] and wizened.[3] She has soft, spotted hands, with gaunt thin fingers.[3] Olenna smells of rosewater, but she also has has an old woman's sour breath[3] and toothless smiles.[7][10] Olenna walks with a cane,[7] and claims to be near deaf,[3] but both might be part of her feigning to be more frail than she actually is.[11] Olenna is older than Lord Hoster Tully.[3]

Olenna rarely shies from stating her opinion, and is a cunning old woman with a wicked wit and a sharp tongue. This has earned her the moniker "Queen of Thorns", though she does not care for the name.[3] According to her granddaughter Margaery, she is not the most patient of women.[3] Although Olenna regularly mocks members of her own family,[3][10] she seems to be a staunch supporter of Tyrell family interests.[11][8]

Ser Arys Oakheart of the Kingsguard thinks of the Queen of Thorns as a strong woman.[12] 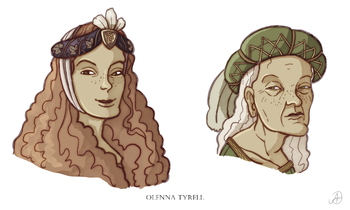 Olenna Tyrell in her youth and old age, by Amuelia ©

Olenna Redwyne was betrothed to Prince Daeron Targaryen when they were both nine,[1] but she claims she did everything she could to make sure it never came to fruition.[3] According to maesters, it was Daeron who broke the betrothal when they were eighteen in 246 AC,[1] but Olenna speaks contemptuously of the "queer notions" of House Targaryen.[3]

Olenna later married Luthor Tyrell, the heir to Highgarden, who had also been spurned by his own Targaryen betrothed.[1] At some point Luthor became Lord of Highgarden, and he and Olenna had three children together, Mace, Mina, and Janna.[4] Olenna says she loved Luthor well enough, as he was kind and not unskilled in bed, but she still considered him an oaf. An example she cites is that Luthor rode off a cliff to his death while hawking, because he had been looking up at the sky and not paying attention to where his horse was going. Olenna feels that her son Mace is also an oaf, and regrets that she did not beat him more often when he was a child, as that would have made him more ready to heed her advice as an adult.[3] Olenna's nephew is Paxter Redwyne, Lord of the Arbor,[13] who is also married to her daughter Mina Tyrell.[4]

Olenna has twin guardsmen named Erryk and Arryk, whom she refers to as "Left and Right" because she cannot tell them apart.[3]

After the death of King Renly Baratheon, Lord Petyr Baelish is sent to Bitterbridge[14] and Highgarden[11] to negotiate an alliance between House Lannister and House Tyrell, including a marriage between King Joffrey I Baratheon and Margaery Tyrell, Renly's widow and Olenna's granddaughter.[14] During the negotiations, Lady Olenna asks Petyr pointed questions about Joffrey's nature. Petyr highly praises Joffrey, but secretly uses some of his escorts to plant disturbing rumors about the king among the servants at Highgarden, thereby creating doubts about the truth of his official statements.[11] 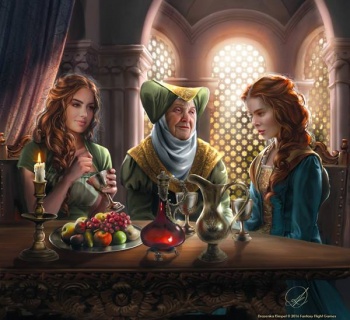 Lady Olenna comes to King's Landing to attend the wedding of Margaery to Joffrey. Olenna and Lady Alerie Hightower arrive in a wheelhouse decorated with gilded carvings of roses.[3]

During a supper with Margaery and a number of noble ladies of houses sworn to the Tyrells, Olenna questions Sansa Stark about Joffrey's nature. She refuses to listen to Sansa's evasions and half truths about Joffrey, and gets Sansa to speak the truth about Joffrey's cruelty and the beatings he gave her. To prevent any potential spy from listening to Sansa, Olenna orders her jester, Butterbumps, to sing loudly. She speaks dismissively of Renly Baratheon, Margaery's late husband, blaming his desire to be king on the "queer notions" of House Baratheon, which she believes comes from their Targaryen blood. Olenna also compares her son, Lord Mace, to a puff fish of the Summer Isles.[3] 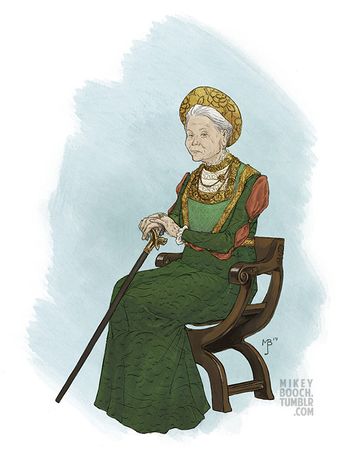 Olenna plots with Margaery to have Sansa marry her grandson Willas, without letting Lord Mace know about it.[3] However, Sansa unwisely tells Dontos Hollard about the plan,[15] and Dontos shares the information with his secret employer, Petyr Baelish. Lord Baelish foils the plot by telling Lord Tywin Lannister about it, who quickly marries Sansa to his own son, Tyrion.[16][15]

In turn, Olenna sabotages Tywin's plan to marry his widowed daughter, Queen Regent Cersei Lannister, to Willas, the heir to Highgarden. Although Mace is originally inclined to accept the offer, Olenna belabors her son and talks him out of it, arguing that Cersei is "too old and too used" for Willas. Tywin learns about this from Lord Varys and shares the information with Tyrion. Tywin orders Tyrion not to tell Cersei about the reason and rather act as if the offer has never been made.[17]

Olenna seems to share the general aversion of the Tyrells against House Martell. During an ugly confrontation in the yard of the Red Keep, she calls Oberyn Martell's paramour, Ellaria Sand, "the serpent's whore".[18]

Olenna is present at the wedding of her granddaughter Margaery and King Joffrey at the Great Sept of Baelor. In the wedding procession after the ceremony, Ser Kevan Lannister escorts her out of the sept. Olenna wears a heavy cloth-of-gold gown. Before the wedding feast in the throne room, Olenna approaches Sansa and expresses her condolences over the deaths of her brother, King Robb Stark, and mother, Lady Catelyn Stark, at the Red Wedding. While she talks with her, Olenna puts Sansa's wind-blown hair in order and straightens the silver hair net that Sansa had received from Dontos and which he told her to wear at the wedding. Later, Olenna makes a snide remark about how often "The Rains of Castamere" is being performed during the wedding feast. When Joffrey begins to choke after drinking from his wedding chalice and eating pigeon pie, Olenna calls for help and comforts Margaery. Cersei accuses Tyrion of having poisoned her son after Joffrey dies.[7]

While later revealing his part in planning Joffrey's death, Petyr implies to Sansa that Olenna poisoned the king, with some help from himself and the people he used, especially Dontos. He refers to Olenna straightening Sansa's hair net, implying that this was the moment the old woman took a black amethyst (actually a crystallized form of the strangler), which she used to poison Joffrey. Petyr suggests that Olenna killed Joffrey to spare her granddaughter Margaery from the same cruelty the boy showed Sansa, and to prevent her hot-tempered grandson, Ser Loras of the Kingsguard, from becoming a kingslayer if he witnessed the king mistreating his sister. Petyr also shares how he planted disturbing rumors about Joffrey's character while he was at Highgarden, prompting Olenna's questioning Sansa when they first met. According to Petyr, Olenna knew Mace dreamed of his daughter Margaery becoming queen, and for that they needed a king, but they did not need Joffrey, as Margaery could marry his brother, Prince Tommen Baratheon.[11] 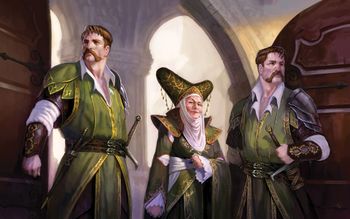 Olenna and her guards, Erryk and Arryk, by Diego Gisbert Llorens, © FFG

After Tyrion Lannister murders his father, Tywin Lannister, and escapes the Red Keep, Qyburn informs Queen Regent Cersei Lannister that a gold coin dating from the time of House Gardener had been found in the quarters of an undergaoler named Rugen (actually an alias of Varys), who vanished at the time Tyrion did.[10] From Lady Taena Merryweather, Cersei also learns that Olenna keeps a large chest of Gardener gold from before Aegon's Conquest in her wheelhouse. In the event that unwary tradespeople offend her, she pays them in the old gold coins of the Reach, which are only half the weight of newly minted gold dragons.[13] Both pieces of information make Cersei suspect that the Tyrells were involved in the escape of Tyrion and in the assassination of Lord Tywin.[19]

Lady Olenna attends the wake for Tywin with her family. Cersei informs Lord Mace Tyrell that she has appointed Lord Gyles Rosby as master of coin instead of Mace's uncle Garth, although the position had been promised to the Tyrells by Tywin. When Mace tries to protest, Olenna eases the tension, but not without making some inappropriate remarks about both Gyles and Garth. She also alludes to the smell emanating from Tywin's corpse, making Cersei angry. When Cersei suggests that Olenna would want to return to Highgarden soon, she replies that she cannot leave King's Landing before the wedding of Margaery and King Tommen I Baratheon. She mentions that she had been discussing a date for the wedding with Tywin at the time of his death and proposes to talk about this with Cersei soon.[10]

In the negotiations with Cersei on the marriage between Tommen and Margaery, Olenna drives a hard bargain. She insists on an immediate wedding, much to Cersei's dismay,[20] and she also dismisses Cersei's suggestion that Tommen should wed his bride with a cloak in Lannister instead of Baratheon colors.[8] Olenna, vouching for her granddaughter still being a maiden,[21] also proposes that Tommen and Margaery share their bed as soon as they are married. Cersei, horrified by the suggestion, refuses this. However, Olenna is adamant that the royal couple should at least spend the wedding night together, as anything else would mean ill luck for the marriage. Cersei relents on this point, but she later regrets her concession and arranges for her brother, Ser Jaime Lannister, to make certain that nothing happens between Tommen and Margaery that night.[8]

During the wedding feast, Olenna complains mockingly that "The Rains of Castamere" is not being sung. The nasty smile of the Queen of Thorns makes Cersei, who is increasingly wary of all Tyrells, think of Maggy the Frog, although the two hardly look alike. Later that night, Olenna suggests to break up the feast and send king and queen to bed together.[8] The day after the wedding, Olenna returns to Highgarden with her grandson, Ser Garlan the Gallant.[8]

Tommen chooses the name Lady Olenna for one of the new dromonds being built for the royal fleet.[22] 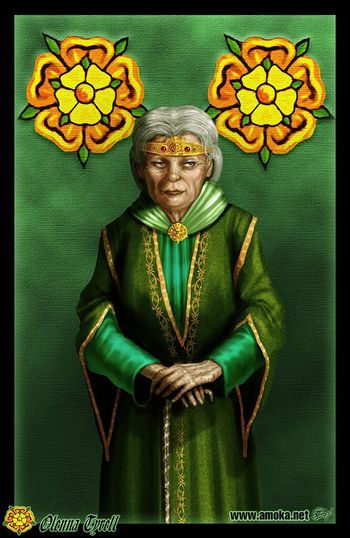 All men are fools, if truth be told, but the ones in motley are more amusing than ones with crowns.[3]

There is entirely too much tut-tutting in this realm, if you ask me. All these kings would do a deal better if they put down their swords and listened to their mothers.[3]

Hush, Alerie, don't take that tone with me. And don't call me Mother. If I'd given birth to you, I'm sure I'd remember. I'm only to blame for your husband, the lord oaf of Highgarden.[3]

Night falls for all of us in the end, and too soon for some. You would know that more than most, poor child. You've had your share of grief, I know. We are sorry for your losses.[3] 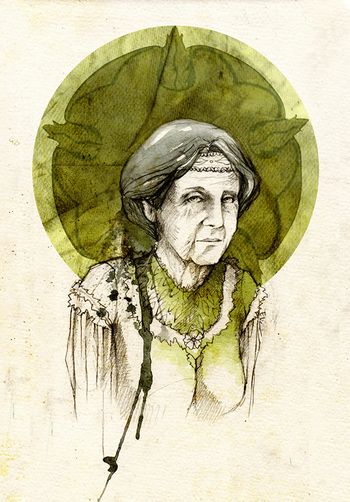 Sansa: The Queen of Thorns, she's called. Isn't that right?
Loras: It is. You'd best not use that name in her presence, though, or you're like to get pricked.[3]

Why, she's just the littlest bit of a thing. There was nothing the least bit thorny about her.[3]

Tyrion was beginning to wonder whether Lord Luthor Tyrell had ridden off that cliff intentionally.[7]

The old woman is not boring, though, I'll grant her that. A fearsome old harridan, and not near as frail as she pretends.[11]