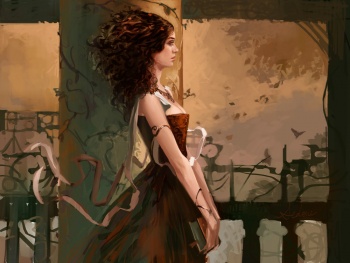 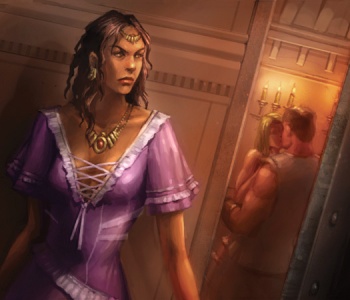 A paramour is the unmarried lover of a noble.

In Dorne, it is common for lords and ladies to have paramours, chosen out of love and lust rather than political alliances. Dornishmen are not greatly concerned if a bastard is born to a paramour.[1] Dorne gives a degree of social status to paramours, despite the "unchaste" nature of the relationship. Outside of Dorne, a Dornish paramour's status is less certain. They may be afforded the esteem granted in their homeland by the diplomatic-minded, or they may receive treatment ranging from slight social disdain to moral condemnation.[2]

That same varying treatment also applies to paramours of non-Dornish nobles, even the mistresses of kings.[3] A paramour can be of the same sex as their lover. Each partner in a marriage can have their own paramour, though it depends on the rank of the partners.[4]

The Citadel does not allow its novices to keep wives or paramours, at least not openly.[5]

When Lord Lyonel Hightower was forbidden by the High Septon from marrying his widowed step-mother, Samantha Tarly, he kept her as a paramour and fathered six children on her, before the election of a new High Septon allowed their marriage. The relationship was deemed highly scandalous.[6]

It was a closely held secret that Prince Lewyn Martell kept a paramour despite the Kingsguard oaths of chastity.[7] Ser Barristan Selmy and his other sworn brothers were aware of this, but kept his secret.[8]

A degree of social deference is given to Ellaria Sand by virtue of her relationship with Prince Oberyn Martell.[2] While esteemed as a high-ranking woman by the Dornishmen, in King's Landing her presence at the high table at the royal wedding of King Joffrey I Baratheon and Margaery Tyrell would be taken as an insult by the noblewomen seated near her. Ellaria is instead placed at a place of honor near the dais.[2] Olenna Redwyne refers to her as "the serpent's whore",[9] in reference to Prince Oberyn's nickname of "the Red Viper".

And this is Ellaria Sand, mine own paramour.[2]

Prince Lewyn was my Sworn Brother. In those days there were few secrets amongst the Kingsguard. I know he kept a paramour. He did not feel there was any shame in that.[8]