Pypar, commonly known as Pyp, is a member of the Night's Watch. He is in the same recruit class as Jon Snow. In the television adaptation Game of Thrones, he is played by Jozef Altin.

Pypar is small and has large ears[2] which he can wiggle.[3] He claims to be able to identify a person's origin by their accent.[4] Pyp can imitate a hundred different voices and loves to act.[4] He enjoys teasing his friend, Grenn.[5] Samwell Tarly thinks Pyp has stupid japes.[6] Pyp can whistle extremely loudly and shrilly.[7]

Before coming to the Wall, Pypar had traveled the Seven Kingdoms with a mummers' troupe.[4]

Pypar joins the Night's Watch at the same time as Jon Snow. During sword practice, Jon thinks Pyp uses his sword like a dagger.[8] He befriends Jon, and helps defend Samwell Tarly when he arrives at the Wall.[4]

Pyp is derisively nicknamed "Monkey" and "the Mummer's Monkey" by Ser Alliser Thorne.[1] Pyp is named to the rangers when Alliser believes him ready to man the Wall.[9] Pyp informs Jon that King Robert I Baratheon has died.[10] Pyp is among the group of friends who stop Jon from abandoning the Night's Watch and forswearing himself.[11]

Pyp remains at Castle Black during the great ranging. Before Grenn leaves with the ranging, Halder and Pypar bring him to Mole's Town.[12]

Pyp is one of the many fighters atop the Wall when Mance Rayder's army assaults the Watch in the battle beneath the Wall. He retches when he sees the bodies of Donal Noye and Mag Mar Tun Doh Weg.[13] Pyp refers to arrows shot by wildlings in the morning as "breakfast arrows", and he names straw scarecrows after members of the Night's Watch. Jon tasks Pyp with commanding the Wall when he descends to Castle Black at one point during the siege.[14] 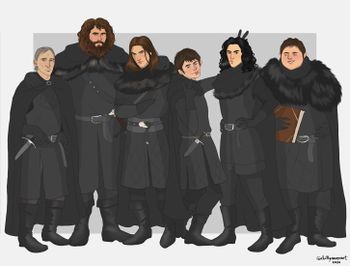 Pyp and other brothers of the Night's Watch - Dolorous Edd, Grenn, Jon Snow, Satin, and Samwell Tarly - by chillyravenart ©

Pyp greets Sam warmly when he returns to Castle Black, whooping loudly. During the Night's Watch election, Pyp votes for Dolorous Edd Tollett, as a jape that Sam thinks is stupid. In conversation with Pyp and Grenn, Sam starts to think that one of the leading candidates in the election should withdraw to support the other, and Pyp notes that Sam would be the best one to talk to them.[6] During the election, when Jon Snow's name is put forward as a candidate by Dolorous Edd, Jon initially thinks it must be one of Pyp's japes. When Jon is elected the new Lord Commander of the Night's Watch, Pyp is among those who congratulate him. Pyp also congratulates Sam for managing to get Jon elected, calling him a wizard and a wonder and a marvel.[7]

Pypar becomes resentful towards Jon, the new Lord Commander of the Night's Watch, because Jon turns distant, avoiding the friends who aided his rise to power.[3]

When Pypar makes jests about the rituals of R'hllor, Jon orders him to stop, and is grateful none of the queen's men heard the japes. Jon sends Pyp to serve at Eastwatch-by-the-Sea.[15]


Pypar: You can call him Lord Snow. You don't want to know what his mother calls him.
Jon: These two are Grenn and Pypar.
Pypar: Grenn's the ugly one.


Grenn: You're uglier than me. At least I don't have ears like a bat.[4]
—Samwell Tarly, Pypar, Jon Snow, and Grenn

The turtle was stuffed full of rabbits! Look at them hop away![14]

—Pypar during the battle beneath the Wall

Jon: You’re all a bunch of mad fools, do you know that?
Pypar: Us? You call us fools? We’re not the ones who got chosen as the nine-hundredth-and-ninety-eighth Lord Commander of the Night’s Watch. You best have some wine, Lord Jon. I think you’re going to need a lot of wine.[7]

The night is dark and full of turnips. Let us all pray for venison, my children, with some onions and a bit of tasty gravy.[15]

The mummer's boy with the big ears was a born liar with a hundred different voices, and he did not tell his tales so much as live them, playing all the parts as needed, a king one moment and a swineherd the next.[4]

They will call you men of Night's Watch now, but you are bigger fools than the Mummer's Monkey here if you believe that. You are boys still, green and stinking of summer, and when the winter comes you will die like flies.[1]

Making mock of another man's prayer is fool's work, Pyp. And dangerous.[15]