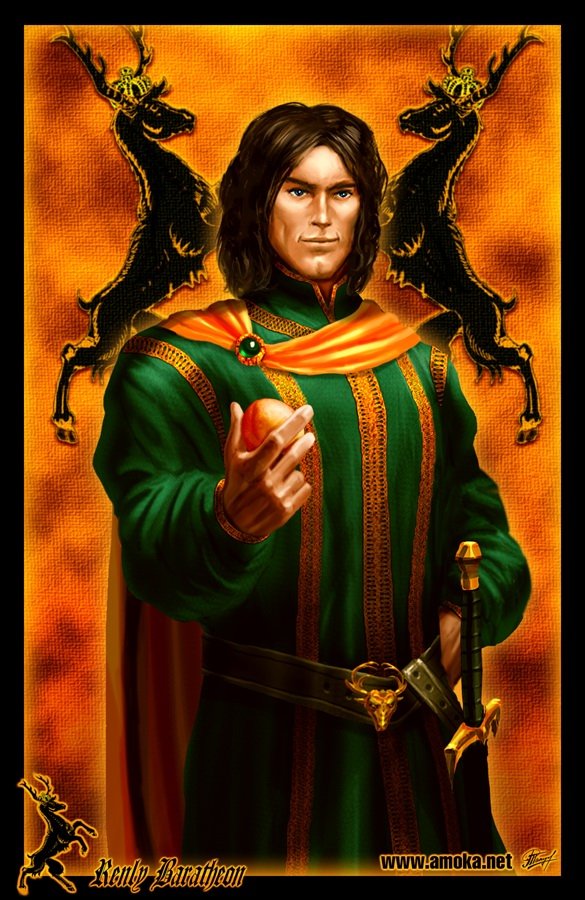 Renly and his peach, by Amok ©

Renly's peach is a peach offered by Renly Baratheon to his elder brother Stannis during a parley.

During their meeting near Storm's End during the War of the Five Kings, Renly Baratheon offers his brother Stannis a peach as they are parlaying. As his brother's hand slides into his cloak Stannis reaches at once for the hilt of his sword, but before he can draw steel Renly produces a peach. Smiling, Renly offers the peach to Stannis, promising him he has never tasted anything so sweet. When Stannis refuses the peach, Renly advises him,

A man should never refuse to taste a peach. He may never get the chance again. Life is short, Stannis. Remember what the Starks say. Winter is coming.[1]

Following Renly's death, Stannis is vexed by the offering of the peach.[2]

The memory of Renly with his peach continues to haunt Stannis.[3] 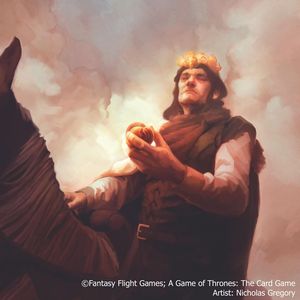 Offer of a Peach, by Nicholas Gregory © Fantasy Flight Games

Renly offered me a peach. At our parley. Mocked me, defied me, threatened me, and offered me a peach. I thought he was drawing a blade and went for mine own. Was that his purpose, to make me show fear? Or was it one of his pointless jests? When he spoke of how sweet the peach was, did his words have some hidden meaning? Only Renly could vex me with a piece of fruit. He brought his doom on himself with his treason, but I did love him, Davos. I know that now. I swear, I will go to my grave thinking of my brother’s peach.[2]

Renly and his peach. In my dreams I see the juice running from his mouth, the blood from his throat. If he had done his duty by his brother, we would have smashed Lord Tywin. A victory even Robert could be proud of.[3]

The peach represents... Well... It's pleasure. It's… tasting the juices of life. Stannis is a very marshal man concerned with his duty, and with that peach Renly says: "Smell the roses", because Stannis is always concerned with his duty and honor, in what he should be doing and he never really stops to taste the fruit. Renly wants him to taste the fruit but it's lost. I wish that scene had been included in the TV series because for me that peach was important, but it wasn't possible.[4]