From A Wiki of Ice and Fire
Jump to: navigation, search
For other uses, see Rhaenys Targaryen (disambiguation).

Princess Rhaenys Targaryen, known among the smallfolk as the Queen Who Never Was, was the daughter of Prince Aemon Targaryen and Lady Jocelyn Baratheon. She was married to Lord Corlys Velaryon of Driftmark. She was a dragonrider whose dragon was Meleys, the Red Queen.[4]

Rhaenys was a great beauty.[5] She had black hair[N 1] and pale violet eyes.[3] By the time she was fifty-five, she had a lean, lined face and her black hair was streaked with white.[6]

She was a clever, capable, spirited, proud,[2] fierce and fearless woman.[6] She had a fiery temperament.[7]

Rhaenys wore a steel and copper armor which flashed in the sun.[4]

Rhaenys was born in 74 AC on the seventh day of the seventh moon of the year. As her father was the Prince of Dragonstone, and she was his firstborn child, many considered her as being next in line for the Iron Throne, after her father Aemon. Queen Alysanne Targaryen, when being presented with her granddaughter, called her "our queen to be".[3]

Rhaenys became a dragonrider in 87 AC when she claimed the dragon Meleys. In 89 AC, Rhaenys joined King Jaehaerys I Targaryen for part of his royal progress. She flew on her dragon Meleys to Highgarden to meet up with Jaehaerys, and together they flew to all four of the Shield Islands. On Greenshield she informed the king about her intention to marry Lord Corlys Velaryon, and received her grandfather's blessing.[3] Rhaenys married Corlys in 90 AC at the age of sixteen. She insisted on arriving at the wedding on the back of Meleys.[3]

In early 92 AC, Rhaenys learned that she was pregnant with her first child.[3]

The Queen Who Never Was

Rhaenys's father, Prince Aemon Targaryen, died in 92 AC. As Aemon had been the Prince of Dragonstone, King Jaehaerys I Targaryen had to formally appoint a new heir to the Iron Throne. The choice was between Rhaenys, Aemon's only child and heir, and Aemon's brother Baelon. Jaehaerys appointed Baelon as the new Prince of Dragonstone, passing over the pregnant Rhaenys and her unborn child. Rhaenys herself was the first to object to the king's decision, and her husband, Lord Corlys Velaryon, gave up his position as lord admiral and his place on the small council. Following that, Rhaenys and her husband returned to Driftmark. Others angered by the king's decision included Rhaenys's mother, Lady Jocelyn Baratheon, her uncle, Lord Boremund Baratheon, and her grandmother, King Jaehaerys's wife, Queen Alysanne Targaryen.[2]

Rhaenys gave birth to her first child, a daughter she named Laena Velaryon, late in the year 92 AC.[N 2] The following year, she give birth to a son, Laenor Velaryon. Although both House Velaryon and House Baratheon insisted that Laenor had the better claim to the throne, Prince Baelon remained King Jaehaerys's heir.[2]

When Baelon died in 101 AC, King Jaehaerys called the first Great Council at Harrenhal to decide the matter of succession. Fourteen claims were considered, including the claims of Rhaenys and her children.[2] Rhaenys's uncle, Lord Boremund Baratheon, was outspoken in supporting the claims of Rhaenys and her son Laenor during the Great Council,[8] and Lord Ellard Stark gave his support to Rhaenys and Corlys as well.[9] Other supporters included House Dustin of Barrowton and House Manderly of White Harbor.[4] Yet the claims of Rhaenys and her daughter were rejected on account of their sex. Rhaenys and Corlys used their wealth and influence to persuade the lords present to vote for their son Laenor, one of the two primary claimants. For this they received support from Lord Boremund, Lord Ellard, Lord Manderly, Lord Dustin, Lord Blackwood, Lord Bar Emmon, Lord Celtigar, as well as others. However, Laenor was eventually passed over in favor of Baelon's son Viserys.[2] While the tally was kept secret, it was rumored the assembled lords favored Viserys by twenty to one.[10]

For having been passed over in the line of succession, the court jester Mushroom would name her "The Queen Who Never Was".[6]

Following the death of Queen Aemma Arryn, in 105 AC, Grand Maester Runciter suggested to King Viserys I Targaryen that he take Rhaenys's twelve-year-old daughter, Laena, to wife. King Viserys, however, chose Alicent Hightower. Angered by the third time she and her family had been scorned by House Targaryen, Rhaenys and her family did not attend the wedding in 106 AC.[5] In 113 AC, King Viserys I and his small council began discussions concerning a betrothal for Princess Rhaenyra Targaryen, Viserys's heir. They eventually agreed on Rhaenys's son, Laenor. Rhaenyra and Laenor were wed the next year.[5]

Both of Rhaenys's children died in 120 AC; Laena (and her child) died in childbirth during the early days of the year, while Laenor was killed by Ser Qarl Correy while attending a fair in Spicetown.[5] 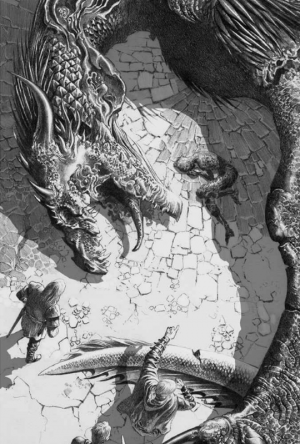 The bodies of Rhaenys and Meleys, as depicted by Douglas Wheatley in Fire & Blood.

When the Dance of the Dragons began in 129 AC, Princess Rhaenys sat on the black council of Queen Rhaenyra Targaryen, the daughter of the late King Viserys I Targaryen. When the Velaryon fleet closed off the Gullet, sailing forth from Dragonstone and Driftmark to block all shipping for Blackwater Bay, the blacks' plan was for Rhaenys to fly overhead on Meleys to keep the greens from attacking their ships with dragons.[4]

Nine days after Lord Staunton dispatched a plea for help, Rhaenys appeared above Rook's Rest upon Meleys. They attacked the soldiers of Ser Criston Cole during the battle at Rook's Rest, but the attack proved to be a ploy. When King Aegon II Targaryen and Prince Aemond Targaryen suddenly appeared upon Sunfyre and Vhagar, Rhaenys turned to meet the attack, despite the knowledge that Meleys stood no chance against the two dragons. The three dragons attacked each other and fell to the ground, entangled. Meleys died in the attack, and besides her carcass was a body was found which was believed to be Rhaenys, although it was so blackened that no one could be certain it was her. Her husband, Corlys Velaryon, was enraged that Rhaenyra had sent Rhaenys instead of going herself, and that Rhaenyra had forbidden her sons Jacaerys and Joffrey from accompanying Rhaenys.[4]

Beloved daughter of Lady Jocelyn Baratheon and Prince Aemon Targaryen, faithful wife of Lord Corlys Velaryon, mother and grandmother, the Queen Who Never Was lived fearlessly, and died amidst blood and fire. She was fifty-five years old.[4]

We can go back to the ends of the earth together. But I'll get there first, as I'll be flying.[3]

—Rhaenys to her husband-to-be, Corlys Velaryon

What did Viserys ever have that she did not? A little sausage? Is that all it takes to be a king?[6]

—Mushroom on the choice of succession