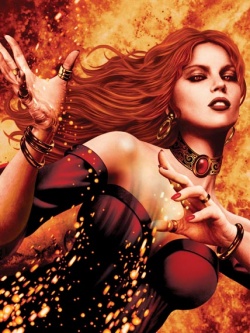 Melisandre wears a ruby on her neck, by John Picacio ©

Ruby is a precious red gemstone.[1] The Summer Isles are rich in rubies.[2] 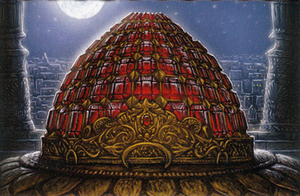 Lady Forlorn, the Valyrian steel blade of Ser Lyn Corbray, has a heart-shaped ruby in its pommel.[5]

House Celtigar is said to have chests of rubies at Claw Isle.[6]

Rubies are among the decorations on the maester's chain of Grand Maester Pycelle.[7]

Illyrio Mopatis has rubies among his various rings.[8][9]

Xaro Xhoan Daxos decorates his nose with rubies, opals, and flakes of jade.[10] The camelry of Qarth decorate their saddles with rubies and garnets.[10]

The warrior women of Bayasabhad, Kayakayanaya, and Samyriana wear iron rings in their nipples and rubies in their cheeks.[11] 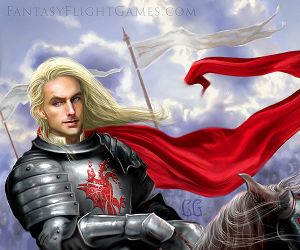 The crown of King Aegon I Targaryen was a Valyrian steel circlet studded with rubies.[12]

Rego Draz, a native of Pentos, was resented for flaunting his wealth by wearing ruby rings in King's Landing.[13]

The sisters Baela Velaryon and Rhaena Targaryen wore rubies at their throats when they presented Daenaera Velaryon to King Aegon III Targaryen at the Maiden's Day Ball.[14]

The black breastplate of Prince Rhaegar Targaryen was decorated with the red three-headed dragon of House Targaryen in rubies.[3] When Lord Robert Baratheon killed Rhaegar with his warhammer at the Battle of the Trident, the rubies were scattered into the river.[15] That crossing of the Trident subsequently became known as the ruby ford.[16]

Arya Stark and Mycah depart the crossroads inn to search for rubies at the ruby ford.[17]

After the death of King Robert I Baratheon, Queen Cersei Lannister wears a black mourning gown. Sewn into the bodice are a hundred dark red rubies in the shape of teardrops.[4] King Joffrey I Baratheon wears a golden crown crusted with rubies and black diamonds.[18] 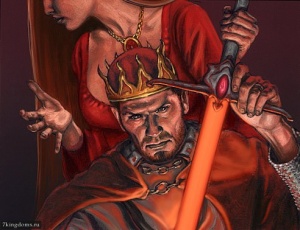 Melisandre's ruby glows when Maester Cressen fails in his attempt to poison the red priestess.[19] Lightbringer, the sword of Stannis Baratheon, has a great square-cut ruby set in its hilt.[20]

The pommel of Hearteater, the new blade of King Joffrey, depicts a heart-shaped ruby in the jaws of a lion.[21] Following the Battle of the Blackwater, the young king wears a mantle studded with rubies.[22] Joffrey rewards Lord Mace Tyrell and his sons, Ser Garlan and Ser Loras, with chains of roses wrought in soft yellow gold. Each necklace has a golden disc with the lion of Lannister picked out in rubies.[22]

Tyrion Lannister wears a chain of rubies and lions' heads when he weds Sansa Stark.[23]

Lord Tywin Lannister has Tobho Mott melt down Ice to create two new Valyrian steel swords. The blades' scabbards are ornamented with a row of studded golden lion's heads with ruby eyes.[24] The new blade for Joffrey, which he names Widow's Wail,[25] has lions' paws with unsheathed ruby claws on its crossguard.[24]

The seven-sided golden chalice given by Mace to Joffrey has a ruby lion sun to represent House Lannister.[25] The pommel of Ser Ilyn Payne's new greatsword is skull-shaped dragonglass with ruby eyes.[26]

Oathkeeper, the second blade made from Ice, has a golden lion's head with ruby eyes on its pommel.[27]

When Tywin's body lies in state, a longsword in a gilded scabbard studded with rubies is placed on his chest.[28]

The Elder Brother of the Quiet Isle informs Brienne of Tarth six rubies from the Battle of the Trident have washed up nearby.[29] 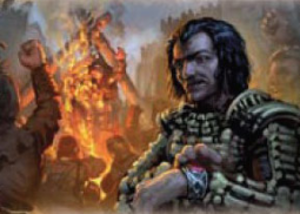 Rattleshirt tells Jon Snow that the big square-cut gem which adorns the captive wildling's iron cuff was a gift from Melisandre.[30] In actuality, Melisandre has used a glamor to disguise Mance Rayder as Rattleshirt, so that the real Rattleshirt can be publicly burned to death while Mance secretly survives.[31][32]

Prince Aegon Targaryen wears three huge square-cut rubies on a chain of black iron; the youth had received them as a gift from Magister Illyrio Mopatis.[33]

Tobho: ... cherrywood for the scabbards, bound in red leather and ornamented with a row of lion's-head studs in pure gold. Perhaps with garnets for the eyes ...
Tywin: Rubies. Garnets lack the fire.[24]