From A Wiki of Ice and Fire
(Redirected from Secret marriage pact (made in Braavos))
Jump to: navigation, search 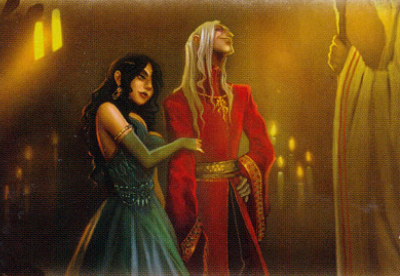 According to the pact Viserys Targaryen was to wed Arianne Martell. © Fantasy Flight Games

The secret marriage pact is a clandestine agreement signed in Braavos about a decade before the start of the War of the Five Kings, forging an alliance between House Martell of Dorne and the exiled House Targaryen. Its purpose was to aid in the overthrow of King Robert I Baratheon and restore House Targaryen to the Iron Throne. The pact was to be sealed by a marriage between Viserys Targaryen and Princess Arianne Martell.[1]

The pact was made in Braavos when Daenerys Targaryen was a little girl. Ser Willem Darry signed on behalf of House Targaryen and Prince Oberyn Martell signed for Dorne. The Sealord of Braavos was a witness.[1] The pact was written on parchment, in the Common Tongue. It has seals, with gold and ribbons and signatures.

The pact verbatim has not been revealed. Viserys Targaryen was still an immature child when the pact was signed, and since he was not yet ready for the information, Willem did not inform him about it.[2] When Viserys was around thirteen or fourteen,[3] Ser Willem took ill and died[4] without ever informing him of the marriage pact.[1] Neither Varys nor Illyrio Mopatis are aware of the secret pact.[2]

According to Ser Barristan Selmy, the secret marriage pact contains "not a word" about Daenerys Targaryen,[5] although Daenerys states after reading the pact that Ser Willem Darry signed "for us".[1]

A Feast For Crows

Doran Martell, Prince of Dorne, reveals to his daughter, Princess Arianne Martell, that she had secretly been promised to the now-dead Viserys as part of his planned vengeance for his sister, Elia Martell, who was killed in the Sack of King's Landing. He informs her that the man she had been promised to is dead, and because of this, her brother Quentyn has gone across the narrow sea to meet with Viserys's sister, Daenerys Targaryen, and wed her.[7]

Quentyn journeys to Meereen with the pact parchment hidden in a flap in his boot. Once presented to Daenerys, Quentyn and his two companions, Gerris Drinkwater and Archibald Yronwood, reveal themselves to the queen as Westerosi knights. When Ser Barristan Selmy reads the parchment, yellowed with age, he thinks that King Robert I Baratheon would have retaliated against Sunspear if he had known of its contents. Daenerys believes that Viserys would have crossed to Westeros if he had been aware of the pact.

Daenerys surmises that with Viserys dead, Quentyn means to marry her to secure the alliance. Quentyn tries to convince Daenerys to marry him, telling her that it will mean fifty thousand Dornish swords pledged to her service. Daenerys tells him of her upcoming marriage to Hizdahr zo Loraq, however, and remarks that it would have been different if he had come earlier. After Daenerys dismisses her audience, she realizes the pact was executed in Braavos, while they were living in the house with the red door. When Barristan tells her that the sigil of House Martell is a sun transfixed by a spear, Daenerys shivers after remembering Quaithe's warning to not trust the "sun's son".[1]

After the wedding feast, Barristan tells his queen that ancient House Martell has been a leal friend to House Targaryen for more than a century. Daenerys replies that she needs to protect her people, but the Martell spears are far away in Westeros. Daenerys introduces Quentyn to her imprisoned dragons and tells him that "the dragon has three heads", suggesting that her marriage to Hizdahr need not be the end of his hopes. Daenerys councils him to leave, but he refuses.[8]

After Hizdahr assumes control of Meereen in Daenerys's absence, Barristan realises that Quentyn's continued presence is a provocation for the king.[5] In the audience chamber of the Great Pyramid, Barristan warns Quentyn to leave Meereen. The unenforceable pact contains nothing about Daenerys or Quentyn, but instead promises Arianne's hand to the late Viserys. He adds that while Daenerys might have considered the marriage alliance while in Qarth, Quentyn is now too late.[5]

You were promised, Arianne.[7]

Quentyn: The marriage pact—
Barristan: —was made by two dead men and contained not a word about the queen or you. It promised your sister's hand to the queen's brother, another dead man. It has no force. Until you turned up here, Her Grace was ignorant of its existence. Your father keeps his secrets well, Prince Quentyn. Too well, I fear. If the queen had known of this pact in Qarth, she might never have turned aside for Slaver's Bay, but you came too late. I have no wish to salt your wounds, but Her Grace has a new husband and an old paramour, and seems to prefer both of them to you.[5]