Shade of the evening 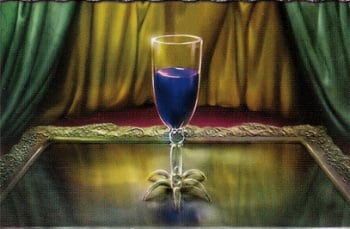 A glass of shade of the evening, by Sara Biddle © Fantasy Flight Games

Shade of the evening,[1], shade-of-the-evening,[2][3] or evening shade[4] is a thick, blue liquid consumed by the warlocks of Qarth. It is called "the wine of warlocks", but it is made from the inky blue leaves that grow on the black-barked trees found around the House of the Undying.[1]

Shade of the evening is deep blue and viscous, flowing like honey.[3] It has an unappetizing smell and initial taste, having been compared to ink, spoiled meat, and rotten flesh,[1][3] but upon swallowing tastes like all things its imbiber has ever tasted, and more.[1]

The liquid is used heavily by the warlocks of Qarth, whose lips have been turned blue by its extended use.[2][5] The Undying Ones have drank so much of it not only their lips have turned blue, but their entire bodies as well.[1] 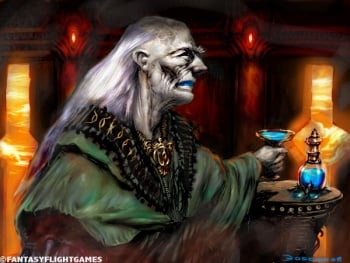 Pyat Pree with shade of the evening, by Carlo Bocchio © Fantasy Flight Games

Pyat Pree has a dwarf servitor give Daenerys a glass of shade to prepare her for her entrance into the House of the Undying.[1]

While strolling the port of Qarth, Daenerys sees for sale a potent magical elixir made of virgin's milk and shade of the evening.[6]

Euron Greyjoy, the new King of the Isles and the North, gives his brother Victarion a cup of shade of the evening, claiming to have taken possession of a cask from a captured galleas out of Qarth which was carrying warlocks. Victarion tries a small amount and promptly spits it out, referring to it as foul.[3]

Euron forces his captive brother Aeron to drink the liquid.[4]

One flute will serve only to unstop your ears and dissolve the caul from off your eyes, so that you may hear and see the truths that will be laid before you.[1]

The first sip tasted like ink and spoiled meat, foul, but when she swallowed it seemed to come to life within her. She could feel tendrils spreading through her chest, like fingers of fire coiling around her heart, and on her tongue was a taste like honey and anise and cream, like mother's milk and Drogo's seed, like red meat and hot blood and molten gold. It was all the tastes she had ever known, and none of them … and then the glass was empty.[1]