Shrykos was a young she-dragon bound to Prince Jaehaerys Targaryen during the Dance of the Dragons.[1] 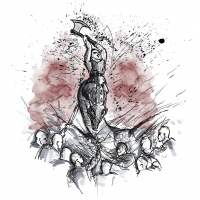 Shrykos died in the Dragonpit when it was invaded by a half-crazed angry mob after a one-handed prophet called the Shepherd began to rant against all dragons everywhere. Shackled by her heavy chains, Shrykos was slain by a woodsman known as Hobb the Hewer who leapt onto her neck driving his axe into her skull as she roared and twisted, trying to throw him off. With his legs locked around the dragon's neck, Hobb delivered seven blows and each time his axe came down he roared out the name of each of the Seven. It was the Stranger's blow that slew the dragon, his axe crashed through scale and bones into Shrykos's brain.[2]

There is little doubt that Shrykos killed scores of people in the Dragonpit before being slain. Shrykos was never ridden.[2]