From A Wiki of Ice and Fire
Jump to: navigation, search
For other uses, see Silver (disambiguation).

Silver stag from the reign of King Aerys II Targaryen

Silver is a prized metal used as currency and ornamentation. Silvered objects have a thin coating of silver, and cloth-of-silver is fabric woven with silver. 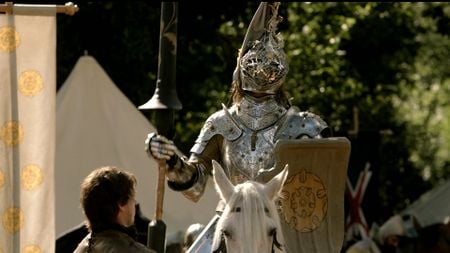 Silver armor of Ser Loras Tyrell in Game of Thrones

Maesters are rewarded with silver chains for their skill in healing.[12][13]

The Most Devout wear cloth-of-silver vestments.[14]

Tobho Mott's velvet coat has hammers embroidered on the sleeves in silver thread, and the armorer wears a sapphire on a heavy silver chain.[1]

The Kingsguard have silver fastenings on their breastplates,[28] and Jeor Mormont, Lord Commander of the Night's Watch, uses silvered bearclaw fastenings.[29]

Great lords often have silvered steel.[30] Ser Andar and Ser Robar Royce have silver armor filigreed with bronze runes, while Ser Loras Tyrell's silver armor is decorated with sapphires.[31] Ser Flement Brax's silver armor is inlaid with amethysts.[32] Big Walder and Little Walder Frey have shining silver plate with enameled blue chasings.[33] Ser Marlon Manderly wears silver armor, and the Manderly guards are armed with silver tridents.[34] Hoster Tully, Lord Paramount of the Trident, has a trout scaled in bronze and silver on his greathelm,[35] and his son, Ser Edmure, likewise has a silver trout on the crest of his own greathelm.[5] The dead weirwood of Raventree Hall is depicted in silver inlay on Lord Tytos Blackwood's scarlet armor.[36] Mya Stone has silvered ringmail.[37]

Dagmer Cleftjaw wears gold, silver, and bronze rings.[38] Illyrio Mopatis has silver among his various rings,[39] and he keeps a likeness of Serra in a silver locket.[40]

Pride of Driftmark, the ship of Lord Monford Velaryon, has a silver hull.[41]

In Qarth, corpses can be covered with a crust of silvered leaves as they are believed to have great power.[42] The tokars of Slaver's Bay can be fringed in silver.[6]

The Temple of the Moonsingers in Braavos is topped with a silvered dome.[43] The towers of High Tide are crowned with roofs of beaten silver.[44] Positioned above the high seat of House Harlaw at Ten Towers are two huge silver scythes.[45]

The silver-gold hair of House Targaryen set them apart from common men.[46] 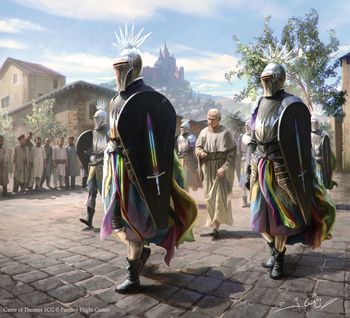 Warriors of the Rhoynar wore armor with silver scales.[47]

The Valyrian Freehold used slavery to mine gold and silver from beneath the Fourteen Flames.[48]

Houses of the westerlands, such as the Reynes, grew wealthy from mining gold and silver.[49] House Yronwood also grew powerful from mining iron, tin, and silver in their lands.[50] Silver, tin, and amber have been found in the Forest of Qohor.[51]

Silver stags began to be minted during the Targaryen era.[46]

Before being outlawed, the Warrior's Sons wore rainbow cloaks and inlaid silver armor over hair shirts.[52]

Silversmiths in the Seven Kingdoms prospered during the reign of King Jaehaerys I Targaryen.[53]

Ser Byron Swann died while attempting to slay a dragon with a spear and a shield of silvered steel.[54]

Prince Rhaegar Targaryen had a harp with silver strings.[57][58]

Haggo gives Daenerys Targaryen a leather whip with a silver handle as a bride gift. Khal Drogo gives his bride a silver horse to match the silver of the girl's hair.[59]

Lord Eddard Stark, the new Hand of the King, has an ornate silver hand as his badge of office.[60] His household guard each clasp their cloak with a hand of beaten silver.[61] A cordwainer tells Jory Cassel that Lord Jon Arryn, Ned's predecessor as Hand, had visited a master armorer and commissioned plate armor wrought in pale silver with a blue jasper falcon and a mother-of-pearl moon on the breast.[1] When Eddard asks Tobho Mott if the armorer had made a falcon helm for Jon, Tobho says he did not receive Lord Arryn's patronage when the Hand visited.[1]

During the harvest feast, Lord Wyman Manderly explains that silver has been held in White Harbor for Robb, the new King in the North, and he offers to have new coinage minted.[33]

The Tickler tortures smallfolk in the riverlands while asking about hidden gold, gems, and silver.[64]

The Tourmaline Brotherhood gives Daenerys Targaryen a dragon crown with three heads carved from ivory, jade, and onyx. Its coils are yellow gold and its wings are silver.[42] Xaro Xhoan Daxos gives her a thousand miniature carved knights with silver and gold armor.[42]

Tyrion Lannister sends Alayaya a necklace of silver and jade and a pair of matching bracelets to make amends for the girl's beating by order of Cersei Lannister.[66]

Walda Frey informs Catelyn Stark that because her grandfather, Lord Walder Frey, had offered Lord Roose Bolton his bride's weight in silver as a dowry, Roose chose to wed the large Walda.[7]

Ser Addam Marbrand gives silver spurs to King Joffrey I Baratheon as a wedding gift.[67] The seven-sided golden chalice given by Lord Mace Tyrell to Joffrey has a silver trout to represent House Tully.[67]

Among the tribute collected from the free folk passing through the Wall are silver brooches and a shirt of silver scales.[68]

Osgrey can keep his silver. Only blood can pay for blood.[56]

You should have asked her for silver. It's coin we need, not kisses.[70]

Willow: Do you have coin to pay? Silver?


Hyle: Silver? For a night's bed and a haunch of horse? Do you mean to rob us, child?


Willow: We'll have silver. Else you can sleep in the woods with the dead men.[71]
—Willow Heddle and Hyle Hunt

Turnips are not like to appease Salladhor Saan. I require gold or silver.[72]