Skagos
The north and the location of Skagos 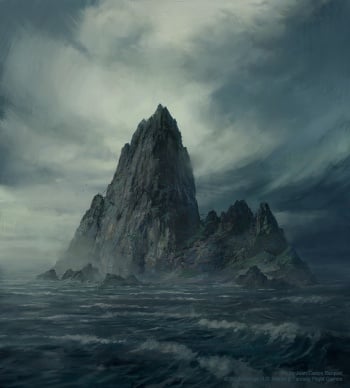 Skagos is mountainous and forbidding with rough and treacherous currents around the isle - by Juan Carlos Barquet. © Fantasy Flight Games

Skagos is a large island in the mouth of the Bay of Seals. In theory, the island is part of the north and subject to House Stark of Winterfell. However, the island has little contact with mainland Westeros and the Seven Kingdoms, and in practice they rule themselves.[1] The name “Skagos” means “stone” in the Old Tongue.[2]

Maester Balder's The Edge of the World is the largest collection of tales regarding the island.[3] It is believed that unicorns live on Skagos.[2][4] The island has a dread reputation; even the hardened sailor Roro Uhoris feared to go there.[4]

The large island is located in the mouth of the Bay of Seals, off the northeastern coast of Westeros. Nearby is the isle Skane and beyond it is the Shivering Sea. Skagos is mountainous and forbidding with rough and treacherous currents around the isle.[2] Sailing is hazardous, especially during the autumn storms when the cold can freeze ropes and sails. The nearby waters have rich fishing grounds.[5]

The Skagosi[2] or Skagossons[6] call themselves the stoneborn, as Skagos means stone in the Old Tongue.[2] They are an isolated people descended from the First Men. Because of their size and smell, some maesters believe the hairy Skagosi have a strong admixture of Ibbenese blood, whereas others suggest they may be partially descended from giants.[3] The Skagosi are said to live in caves or mountain fastnesses.[2] Traders claim the lords of stoneborn clans ride shaggy unicorns.[3]

The people of Skagos are generally despised by the rest of the northmen, who derisively call them "Skaggs".[2] They regard Skagosi as little more than tribes of raiders and savages, not dissimilar to wildlings. They are considered a backward folk, rumored to still perform human sacrifices to weirwoods, lure passing ships to destruction with false lights, and engage in cannibalism during winter.[2][4] When they trade with outsiders, Skagosi offer pelts, obsidian blades and arrowheads, and unicorn horns.[3] According to Lord Roose Bolton, the inhabitants of Skagos still continue the banned tradition of the first night.[7]

According to The Edge of the World by Maester Balder, in ancient days men of Skagos sailed to the nearby island Skane, seizing all the women, killing all the men, and feasting on their flesh for a fortnight. The smaller isle has reportedly been uninhabited since the Feast of Skane.[2][8] Some attribute the destruction of Hardhome to cannibals from Skagos.[9]

The people of Skagos tended to cross the Bay of Seals to trade and raid on the mainland until Brandon IX Stark, King in the North, broke their power, destroying their ships and forbidding them the sea.[3] It is not known when Skagos ultimately became subject to the supremacy of Winterfell, but they rose in rebellion against House Stark during the rule of King Daeron II Targaryen. The rebellion lasted for years and claimed the lives of thousands, among them Lord Barthogan Stark, before being put down.[3]

According to legend, Bael the Bard entered Winterfell under the guise of a singer named Sygerrik of Skagos; "Sygerrik" means "deceiver" in the Old Tongue.[10]

Some Skagosi have served in the Night's Watch over the past millennia. A Crowl was Lord Commander over a thousand years ago, and, according to the Annals of the Black Centaur, a Stane served as First Ranger for a brief time.[3]

With Janos Slynt aboard, the carrack Summer's Dream sails from King's Landing for Gulltown, the Three Sisters, Skagos, and Eastwatch-by-the-Sea.[11]

Sailing from Eastwatch-by-the-Sea to Braavos, Blackbird passes the shores of Skagos. Samwell Tarly sees a wrecked galley on the rocks, with bodies of crewmen being consumed by rooks and crabs.[2]

The galleys Oledo and Old Mother's Son are driven onto the rocks of Skagos after setting sail from the Wall.[4] Cotter Pyke writes that Storm Crow spotted the wreckage of a galley along the coast of the island.[12]

Lord Wyman Manderly learns from Wex Pyke that Rickon Stark is alive and has been taken to Skagos by Osha. Wyman tasks Lord Davos Seaworth with retrieving the boy.[13][14]

Dareon: If the gods are good, we may catch a glimpse of a unicorn.
Samwell: If the captain is good, we won't come that close. The currents are treacherous around Skagos, and there are rocks that can crack a ship's hull like an egg.[2]

The maesters will tell you that King Jaehaerys abolished the lord's right to the first night to appease his shrewish queen, but where the old gods rule, old customs linger. The Umbers keep the first night too, deny it as they may. Certain of the mountain clans as well, and on Skagos ... well, only heart trees ever see half of what they do on Skagos.[7]