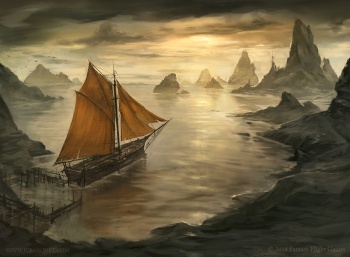 The Stepstones are a chain of islands between the southern narrow sea and the northwestern Summer Sea. The islands are east of Dorne in Westeros and west of the Disputed Lands in Essos.[1] The Stepstones are notoriously filled with pirate dens.[2] 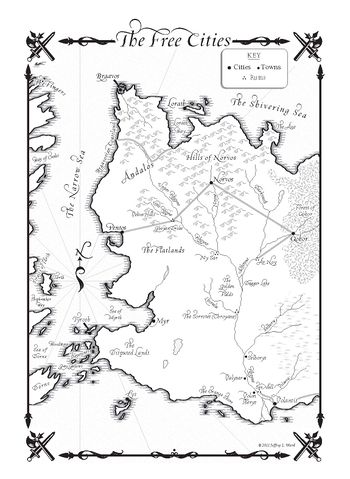 A map of the Free Cities, with the Stepstones at lower left.

In and of themselves this small chain of rocky islands is worthless - however, the major sea lanes between the narrow sea and the Summer Sea have to pass through the straits between the Stepstones, making them strategically very important. All the sea trade to the east coast of Westeros and to five out of nine of the Free Cities has to pass through the Stepstones to reach the other major markets of the world.[3] For that matter, most merchant ships hug the coasts instead of sailing out into the deep oceans, thus even shipping lanes going to and from the west coast of Westeros - and the major, ancient ports of Oldtown and Lannisport - also have to pass close by the Stepstones, putting them in striking range of any fleets stationed there.[4]

The Stepstones are a lawless borderland contested by various different Free Cities at one time or another, much as the Disputed Lands are contested on the mainland, but never fully controlled by any of them and rarely for long. The Free Cities most invested in this contest are nearby Tyrosh, Lys, and Myr, though at times Braavos and Pentos have also been dragged into the fighting. Sometimes kingdoms in Westeros also became involved in these skirmishes, such as the old Storm Kings and particularly independent Dorne.

There are a little over a dozen islands in the Stepstones, along with smaller islets. Bloodstone is the largest island, and at several points in history has been the unofficial capital of larger pirate fiefdoms that have risen in the chain. Other known islands are Grey Gallows and (according to semi-canon sources) Torturer's Deep.[5] The Free City of Tyrosh is located on the northernmost island in the chain, just off the coast of mainland Essos, but it usually isn't considered politically part of "the Stepstones" and its lawless pirate enclaves.[4]

Physically, the small islands of the Stepstones are described as "bleak and stony".[6] The chain is often wracked by large storms coming up from the warm waters of the Summer Sea to the south, which sweep over the isles as they pass north to slam into the aptly named Shipbreaker Bay.[7] Every few decades, whenever the pirates grow too numerous or hostile, expeditionary fleets will be sent out from Tyrosh, Braavos, or Volantis to clear them all out and destroy their settlements - these efforts succeed, but before long new corsairs and pirate dens will spring up to replace them.[4] Thus there are no long-lasting stone castles or permanent settlements of note on the islands: even the large and better organized pirate factions that have appeared over the centuries - that managed to consolidate power in the isles for considerable lengths of time - at best only built sturdy fortresses made of wood. More commonly, smaller and weaker pirate bands dot the isles with more ramshackle abodes.[8]

A global crossroads - between north and south, east and west - sailors, mercenaries, pirates, adventurers, and exiles from across the known world can be found in the Stepstones. There isn't much of a permanent population, though at any given time the temporary pirate dens and slave pits of the isles are mostly made up of nearby Lyseni, Myrish, and Tyroshi stock.[7][4] From the far south, Summer Islander merchant ships traveling their routes to and from Braavos, Pentos, or King's Landing have to pass through the Stepstones.[9] From the far north, Ibbenese whaler ships have to pass south through the Stepstones to reach ports in the Summer Isles or southern Free Cities such as Volantis.[10] From the far west of Westeros, ironborn reavers have always found the Stepstones to be a good hunting ground to seek their fortunes. Ships and crews from fabled lands of the far east also have to pass the Stepstones on their way to Westeros and the narrow sea.[11]

According to legend, the Stepstones are remnants of the Arm of Dorne, a land-bridge which once linked Westeros and Essos. More than ten thousand years ago the First Men used that land-bridge to cross into what is now known as Dorne to begin their invasion of Westeros.[12] During the Breaking, the greenseers of the children of the forest are said to have used magic to shatter the land-bridge into an archipelago named the Stepstones, located between the Broken Arm and the Disputed Lands.[13]

The Freehold of Valyria established Tyrosh as a military outpost to control trade near the Stepstones.[4]

Slavers from the Stepstones captured the Wolf's Den at the mouth of the White Knife during the reign of King Edrick Stark,[14] and pirates from the isles also sometimes attacked the eastern riverlands[15] and Vale of Arryn.[16] There are pockets of Rhoynar on the islands dating back to the migration of Nymeria's ten thousand ships.[17]

Whatever control the Valyrians may have once exerted over the Stepstones collapsed after the Doom of Valyria, and pirates apparently thrived there during the chaos of the subsequent Century of Blood. By the time of the Targaryen Conquest, one century after the Doom, the Stepstones were already home to a large number of pirates. The Seven Kingdoms and the Free Cities have fought for control over some or all of the islands, but these gains were always temporary.[18] Myr and Lys of the Free Cities have constantly engaged in wars over possession of the Stepstones.

Pirates attacked Cape Wrath during Aegon's Conquest.[19] In 8 AC during the First Dornish War, raiders from Dorne also attacked Cape Wrath with the aid of a pirate king from the Stepstones.[20] In 29 AC and in 30 AC, Prince Maegor Targaryen, Lord Aethan Velaryon, and Ser Osmund Strong led a punitive campaign to the Stepstones to drive out corsairs led by the pirate-lord Sargoso Saan.[21] Pirates from the Stepstones participated in the ill-fated Fourth Dornish War in 83 AC, in which their entire combined fleet was burned in a single day by the Targaryen dragons. Afterwards the pirates of the Stepstones were less troublesome for some time.[22]

The losing faction of the Myrish Bloodbath settled on the Stepstones in 92 AC, and became little more than pirates themselves. They were soon driven out, however, by the Archon of Tyrosh - who had made a common cause with a league of pirate kings. The Myrish pirates fled west to briefly seize the east coast of Tarth, before being routed by the Targaryens.[22]

After defeating Volantis in 96 AC, the Triarchy of Lys, Myr, and Tyrosh invaded the Stepstones to subdue outlaws and pirates living in the islands. While the Seven Kingdoms were appreciative at first, they came to resent the high tolls imposed by the Free Cities on trade in the narrow sea. Aided by Lord Corlys Velaryon, Prince Daemon Targaryen began a private war for the Stepstones in 106 AC, and he proclaimed himself King of the Stepstones and the Narrow Sea in 109 AC. The Triarchy rallied by 111 AC, however, allying with Qoren Martell of Dorne, which was wary of the Targaryens expanding into the Stepstones. Led by Racallio Ryndoon, their combined forces helped turn back the tide of Daemon's conquests, and he struggled to defend his holdings. Daemon was called back from the isles by the death of his wife Rhea Royce in 115 AC, and he abandoned the Stepstones after becoming embroiling in other political intrigues in King's Landing. Five other men followed him as Kings of the Narrow Sea.[23]

During the Dance of the Dragons, Sharako Lohar led the Triarchy's fleet from the Stepstones for the Battle of the Gullet in early 130 AC.[24] The Triarchy's disastrous losses in the battle led to the Daughters' War in 131 AC. When Lys and Myr began fighting after Sharako's death, Tyrosh sent Racallio Ryndoon to conquer the Stepstones. After killing the King of the Narrow Sea, Racallio claimed that title for himself, however.[25]

During the regency of Aegon III, Lord Unwin Peake, the Hand of the King, desired to establish a Westerosi presence on the Stepstones. Lord Alyn Velaryon received the nickname "Oakenfist" after defeating a Braavosi fleet in the islands, but Alyn's hasty attack prevented Ser Gedmund Peake from landing troops. Lord Manfryd Mooton agreed to a large indemnity to avoid war between Braavos and the Seven Kingdoms, and the Sealord of Braavos agreed to cede the Stepstones to the Iron Throne. The islands were occupied by Racallio and Pentoshi, however.[26]

After Racallio fled to the Basilisk Isles, the Daughters' War ended with most of the Stepstones under the dominion of Dorne. Aliandra Martell, Princess of Dorne, granted the title Lord of the Stepstones to her consort, Drazenko Rogare.[27]

During the War of the Ninepenny Kings, the Band of Nine conquered the Stepstones. A battle was fought here in which Maelys I Blackfyre was killed, ending the Blackfyre Pretenders' threat.[28] The conquest of the islands was a scheme of King Aerys II Targaryen which amounted to nothing.[29]

The Stepstones and Basilisk Isles have often been raided by ironborn reavers and sellsails from the Iron Islands, such as Harwyn Hoare[30] and Dalton Greyjoy.[31] When he was fifteen, Balon Greyjoy spent a summer reaving in the Stepstones with Dagmer Cleftjaw, killing his first man and taking his first two salt wives in the islands.[32] Asha Greyjoy was away fighting Lyseni pirates in the Stepstones when Balon, Lord Reaper of Pyke, exiled Euron Greyjoy from the Iron Islands.[33]

Fighting has broken out in the Stepstones.[34]

Ser Osmund Kettleblack tells Ser Jaime Lannister he served in the Stepstones and the Disputed Lands with the Gallant Men, fighting for Lys and then Tyrosh.[35]

While sailing from Braavos to Oldtown, the crew of the Cinnamon Wind defends against pirates in the Stepstones.[9] A Volantene galley barely escapes Salladhor Saan's Old Mother's Son and Valyrian.[11]

After Cersei Lannister is arrested by the Faith of the Seven, Lord Aurane Waters absconds with Cersei's dromonds. Grand Maester Pycelle believes that Aurane intends to become a pirate in the Stepstones.[36]

Ser Davos Seaworth recalls that Salladhor abandoned the cause of Stannis Baratheon with the intent to return to the Stepstones with his remaining ships.[37]

Some of the Golden Company lands on the Stepstones.[38][39]

The Iron Fleet, headed to Slaver's Bay, stops for game, grain, and fresh water in the Stepstones before Victarion Greyjoy splits the fleet in three.[40]

Strange ships are reported in the Stepstones.[41]

Arya Stark learns that Pynto claims to have once been the most notorious pirate of the Stepstones.[42]

According to Valena Toland, a new pirate king has set up on Torturer's Deep, styling himself the Lord of the Waters, with three-decked warships.[43]

Autumn is a season rife with storms, and pirates still make their dens upon the Stepstones and venture forth to prey on honest men.[2]