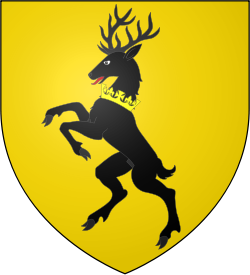 The title of Storm King was held by the ancient Durrandon kings, who ruled the Kingdom of the Storm,[1] most of which is now the stormlands and at one point included the Riverlands, Crownlands and the eastern part of the Reach.

The first of the line was Durran, who according to legends built Storm's End and won the love of Elenei, the daughter of the sea god and the goddess of the wind.[2]

The Storm Kings established a powerful kingdom, and were able to extend their possessions to the north, capturing the riverlands during the reign of King Arlan III Durrandon. Eventually, however, King Arrec Durrandon was forced to cede these northern possessions to the Iron Islands. During the Century of Blood, Argilac Durrandon aided Pentos, Tyrosh, and Aegon Targaryen against the militant tigers of Volantis when they attacked Tyrosh after previously having taken Lys and Myr.[3]

The last Storm King, Argilac the Arrogant, was slain in the Last Storm by Orys Baratheon, who took his daughter and his colors and words as his own during the War of Conquest, founding House Baratheon.[4] Aegon the Conqueror named Orys the Lord Paramount of the Stormlands.[5]