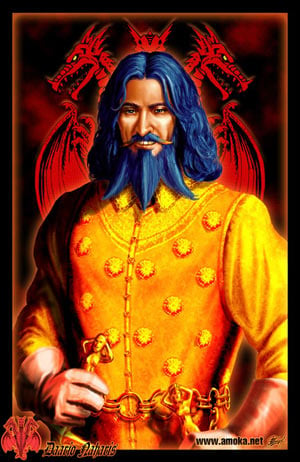 Daario Naharis, leader of the Stormcrows, by Amok©

The Stormcrows are a mercenary company found in the Free Cities. Their banner displays four crows between crossed lightning bolts.[N 1] They number five hundred horses.[1]

Following the fall of Astapor, the Stormcrows are hired to help defend Yunkai against the threat of Daenerys Targaryen. They are placed on the right of the defensive line facing Daenerys's host. The captains of the Stormcrows, Prendahl na Ghezn, Sallor the Bald and Daario Naharis, attend the parley with Daenerys. She offers the captains gold and plunder if the Stormcrows come over to her side, but is rebuffed by Prendahl. The Stormcrows are a company of freed men and therefore the question of breaking the contract with Yunkai would have to be put to each man. While that debate is going on in the camp, Daario, won over by Daenerys, kills Prendahl and Sallor and brings the Stormcrows over to Daenerys. She is victorious in the ensuing battle near Yunkai.[1]

Daenerys sends Daario and the Stormcrows to Lhazar as her representatives with the mission of reopening the land trade routes between Lhazar and Meereen.[3]

The Stormcrows defeat the Long Lances—who have been contracted by Yunkai—when the latter attempt to close the Khyzai Pass. Nine Stormcrows die in the fight but twelve Long Lances defect to the Stormcrows.[4] While in Lhazar, two serjeants plot to steal the gems and gold plate entrusted to Daario as gifts for the Lhazarene. Daario finds out and kills them.[4]

After the Stormcrows return to Meereen, Daenerys orders them to scout the hinterlands of Yunkai and protect caravans taking the Khyzai Pass.[4] A group of Windblown, including Quentyn Martell, defect to Daenerys and are expected to join the Stormcrows.[5] When they are revealed to be false deserters under orders of the Tattered Prince, however, they are imprisoned.[6]

Daario, the Stormcrows' captain, is included among the hostages sent to the Yunkai'i when Daenerys make peace to resolve the second siege of Meereen.[6] After Daenerys flees Daznak's Pit atop Drogon, Ser Barristan Selmy thinks that Daario must be rescued before the Stormcrows take matters into their own hands.[7] Jokin and the Widower serve in Daario's stead on the ruling council of Meereen.[8]

I trust all my men. Just as far as I can spit.