Storming of the Dragonpit 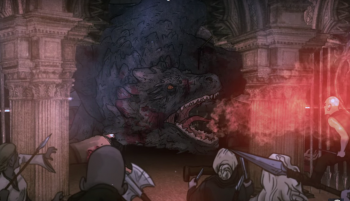 A dragon looses its flame on its attackers. In supplemental Blu-ray content from Game of Thrones Season 5.

See also: Riot of King's Landing (Dance of the Dragons)

The fearful citizens of King's Landing broke out in a riot the night following Queen Helaena Targaryen's suicide. During the first night of these riots, the mobs plundered and killed all over the city, hacked the River Gate to pieces, and killed Ser Luthor Largent and his five hundred gold cloaks on Cobbler's Square when they arrived to arrest the Shepherd. The Shepherd himself fled the gold cloaks.[2]

Although most of the mobs fled at dawn, they returned in greater numbers the following night, dubbed the Last Day by Munkun. The Shepherd appeared once again at Cobbler's Square to preach against the large crowd which had formed on the square. The people feared the arrival of King Aegon II Targaryen's dragons and army, but the Shepherd told his "lambs" that everyone would burn when the dragons arrived, and that prayers would not be able to stay the wroth of the Stranger. Instead, the Shepherd claimed that the only way the city would be able to achieve salvation was by killing the dragons in the Dragonpit.[2]

The Seven Who Rode

Queen Rhaenyra Targaryen and her sons, Joffrey Velaryon and Aegon Targaryen, looked on with their loyalists from atop the roof of Maegor's Holdfast. Although Rhaenyra had sent riders to Ser Balon Byrch at the Old Gate and Ser Garth the Harelip at the Dragon Gate to seize the Shepherd, disperse his followers, and protect the dragons, they did not know whether the riders had been able to reach their destinations. Prince Joffrey wished to ride forth to protect the dragons, but Rhaenyra refused to allow it, insisting that they would need every man to defend Aegon's High Hill after the Hill of Rhaenys fell. Joffrey, fearing his own dragon, Tyraxes, would be killed, slipped away to the yard and loosed his mother's dragon Syrax. Mounted on Syrax's back, the prince flew out over the city. Whether it was his intent to fly the dragon into battle or to fly to the Dragonpit to fetch his own dragon, Tyraxes, and perhaps the other dragons as well, is unknown.[2]

Fearful, Rhaenyra ordered men to return her son to the castle. Ser Medrick Manderly, Ser Loreth Lansdale, and Ser Harrold Darke, Ser Harmon of the Reeds, Ser Gyles Yronwood, Ser Willam Royce, Ser Glendon Goode, six squires, eight gold cloaks, and twenty men-at-arms rode forth from the Red Keep and fought their way through the city in an attempt to reach the prince. Joffrey, however, was unable to remain on Syrax's back once they were high in the air, and slid from her back two hundred feet above Flea Bottom and plunged to his death. The Seven Who Rode came upon his body as the mob was cutting it to pieces, and managed to reclaim every part of his except for a foot.[2]

The storming of the Dragonpit 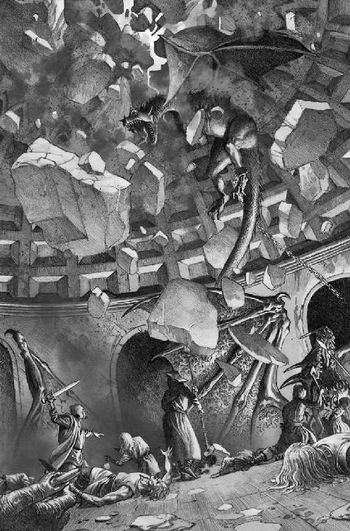 Dreamfyre cracks the dome of the Dragonpit, as depicted by Douglas Wheatley in Fire & Blood.

The City Watch marched forth from their barracks at the Dragon Gate to defend the Hill of Rhaenys, but could not halt the mob. Less than fifty Dragonkeepers stood guard the second night of the riots, but although they defended the Dragonpit to the best of their abilities, the mobs eventually smashed through the doors of the Dragonpit's lesser entrances, made of oak and iron, by using crude rams and axes. Others climbed in through windows. During the battle, all Dragonkeepers were slaughtered.[2]

Inside, the four dragons had been awakened, roused, and angered by the sounds of the attack. Unable to fly away, as they had been chained, the four dragons fought with their horns, claws, and teeth. They let loose their dragonflame and transformed the Dragonpit into a fiery inferno. The first dragon to die was Shrykos, who was slain by Hobb the Hewer. Hobb leapt onto her neck and drove his axe down into the dragon's skull. It took seven blows, according to Septon Eustace. Next died Morghul, slain by the Burning Knight, who rushed into the dragon's flame and stabbed him repeatedly in the eye with his spear as he burned to his own death. Tyraxes burned those who rushed at him from his lair, until the front entrance of his lair was completely blocked with corpses. However, after the Shepherd instructed his followers to break through the back door of the dragon's lair, the dragon became entangled in his own chains and was slain by the mob. His membranes were afterwards sliced from his wings and torn into strips, so dragonskin cloaks could be fashioned from them. Dreamfyre was able to break free from her remaining bonds. She took wing, circled the cavernous interior of the dome and swooped down to attack the men below. She slew more men than the other three dragons combined. Archers and crossbowmen loosed arrows and quarrels at the her, and whenever she landed men swarmed her to attack, driving her back into the air. Eventually one of her eyes was nicked by a crossbow bolt. Half-blind and maddened, Dreamfyre flew into the Dragonpit's great dome above, which cracked on impact. Half of it came tumbling down, crushing her and the dragonslayers under tons of broken stone and rubble.[2][1]

No one knows how many people died that night; hundreds, possibly even thousands, with many more having been injured.[2][1]

Following the destruction of the roof, the storming of the Dragonpit ended. Yet Rhaenyra Targaryen's dragon Syrax, freed from the Red Keep's stables by her son, Joffrey Velaryon, now descended on the survivors who came forth from the smoking ruins. According to Mushroom, "a thousand shrieks and shouts echoed across the city, mingling with the dragon's roar." The Hill of Rhaenys looked as if it wore "a crown of yellow fire", burning so bright that it seemed the sun was rising. Instead of breathing fire onto the mobs from above, Syrax flew down and attacked the mob with her teeth and claws, devouring the people below. Rhaenyra watches Syrax's end from atop the roof of Maegor's Holdfast, clutching her only surviving son[N 1] Aegon in her arms until Syrax fell to the ground.

Mushroom, Septon Eustace, and Grand Maester Munkun have written down accounts of Syrax's death. According to Munkun, Hobb the Hewer killed the dragon with his axe, although Archmaester Gyldayn believes this is almost certainly mistaken, as he considers it unlikely that the same man could have slain two dragons the same night and in the same manner. Others have suggested an unnamed spearman, "a blood-soaked giant" who leapt onto the dragon's back, while others tell of Ser Warrick Wheaton, who supposedly slashed a wing from Syrax with a Valyrian steel sword (Gyldayn believes Lamentation to have been the most likely option). Bean, a crossbowman, claimed responsibility for Syrax's death afterward, and boasted of it frequently - until one of Rhaenyra's supporters grew tired of his stories and cut our his tongue.[2]

Gyldayn argues that it is possible that all the candidates, except for Hobb the Hewer, played some role in the dragon's death. However, the tale most frequently told in King's Landing is that of the Shepherd. According to the tale, as others fled, the Shepherd faced Syrax on his own, calling upon the Seven for succor, until the Warrior himself took form, thirty feet tall, with a black blade made of smoke that turned to steel. Even Septon Eustace repeats the tale in his account, while singers sang about it for many years.[2]

Shaken by the loss of her dragon and her son Joffrey Velaryon, Rhaenyra Targaryen was inconsolable, according to Mushroom. Her counselors agreed that King's Landing was lost to them, and they managed to convince Rhaenyra to abandon the city. Rhaenyra agreed reluctantly and fled the next day, sneaking out of the city with some of her loyalists and son Aegon. Rhaenyra reached, after great difficulty, her own castle Dragonstone, where she was subsequently captured by King Aegon II Targaryen, whose people had taken the castle during the previous weeks.[2][1]

Drunks they may be, but a drunken man knows not fear. Fools, aye, but a fool can kill a king. Rats, that too, but a thousand rats can bring down a bear.[1]

When the dragons come, your flesh will burn and blister and turn to ash. Your wives will dance in gowns of fire, shrieking as they burn, lewd and naked underneath the flames. And you shall see your little children weeping, weeping till their eyes do melt and slide like jelly down their faces, till their pink flesh falls black and crackling from their bones. The Stranger comes, he comes, he comes, to scourge us for our sins. Prayers cannot stay his wroth, no more than tears can quench the flame of dragons. Only blood can do that. Your blood, my blood, their blood. There the demons dwell, up there. Fire and blood, blood and fire. This is their city. If you would make it yours, first you must destroy them. If you would cleanse yourself of sin, first must you bathe in dragon’s blood. For only blood can quench the fires of hell.[2]

—The Shepherd to the crowds on Cobbler's Square