From A Wiki of Ice and Fire
(Redirected from Tales of Dunk and Egg)
Jump to: navigation, search 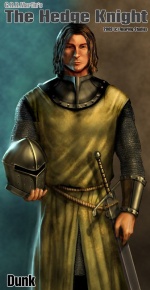 The Dunk and Egg stories are an ongoing series of novellas written by George R. R. Martin, set in the world of A Song of Ice and Fire, prequels to the main novels. The stories relate the adventures of the hedge knight Ser Duncan the Tall, who would become a legendary member of the Kingsguard, and his squire Egg, who would become King Aegon V Targaryen of Westeros. The stories begin with their meeting eighty-nine years before the events of the main novels (209 AC), and may cover the events until the deaths of Duncan and King Aegon.[1]

Three novellas have appeared so far: The Hedge Knight, The Sworn Sword and The Mystery Knight. Six to twelve stories in the series are planned.[2]

Three novellas have been published:

These three stories were collected in one book, A Knight of the Seven Kingdoms (2015).

Graphic novels of these three stories have also been published. The most recent graphic novel, adapting The Mystery Knight, was released on August 8, 2017.[11][12]

George R.R. Martin has said that he would like to write a number of these stories (varying from six to twelve from interview to interview) covering the entire lives of these two characters. A fourth installment, currently untitled, but with the working title The She-Wolves of Winterfell, has been described by Martin. It will feature Ser Duncan the Tall and Egg at Winterfell, where they will meet the so-called "She-Wolves". Originally, it was planned that this fourth Dunk & Egg novella would be published in the Dangerous Women anthology Martin was co-editing with Gardner Dozois. However, when unable to make the deadline, Martin submitted The Princess and the Queen, an abridged version of a piece he had written on the civil war Dance of the Dragons.[13]

Besides The She-Wolves of Winterfell, Martin also has a fifth tale roughed out in his head, which has the working title The Village Hero. This novella is set to take place in the Riverlands,[13] after the events of "She-Wolves".[14] Regarding the completion of these two novellas, Martin has stated the following:

There's no telling when I will have time to finish either of these, or which one I will write first. I don't expect I will know more until I've delivered THE WINDS OF WINTER.[13]

Further working titles for future Dunk and Egg stories have been revealed by Martin.[14]

The chronology of these stories is as yet unknown, as well as if any other stories may take place in between them.

While the original intent was to publish all the Dunk & Egg tales in a series of anthologies (as was done for the first three), and then collect them all in one big book, when The Mystery Knight was released it became clear that the stories were too long for this. The current plan, as expressed by Martin, is to release a series of Dunk & Egg collections, each consisting of three novellas. The first of these collections consisted of the three published stories to date, The Hedge Knight, The Sworn Sword and The Mystery Knight. Originally, the obvious title "The Hedge Knight" was considered, but due to already existing confusion about the same-titled novella and graphic novels, the first collection was titled A Knight of the Seven Kingdoms.[13] It was released on October 6th, 2015, by Bantam Spectra.

Martin had admitted that there has been interest for movies or television shows for the Dunk & Egg tales.

There has been interest, yes, but the rights situation is complicated. Film and television rights to the characters and the three published Dunk & Egg stories remain with me at present... but HBO, when acquiring the rights to the SONG OF ICE & FIRE novels, also acquired film and television rights to the world of Westeros. So if we did Dunk & Egg with anyone else, we would need to remove all the references to House Targaryen, the Iron Throne, etc... not completely impossible, but certainly undesireable. Whereas if HBO decided they wanted to make a Dunk & Egg miniseries or TV movies, they'd first need to buy the stories. That's a much more attractive proposition for all concerned, I think... but if it happens, it will happen years from now, not tomorrow, and not next week.[13]

In January 2021, it was reported that a series adaptation, "Tales of Dunk and Egg", was in early development at HBO.[15]