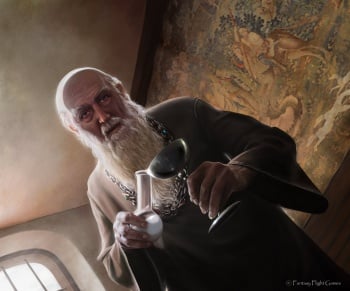 A tapestry hangs on the wall behind Grand Maester Pycelle, by Tiziano Baracchi © Fantasy Flight Games

Tapestry is a form of textile art in Westeros and Essos.

Tapestry is a heavy woven textile with intricate designs suitable for wall-hangings. Presumably, it is traditionally woven on a vertical, or floor loom, as it is in our world. It is likely that the tapestry weavers use fabric such as linen or cotton or wool. Threads may include silk, gold, silver,[1] and perhaps other alternatives. Some tapestries are ancient and considered priceless.[2] Old tapestries can unravel.[3]

Tapestries can be ornate, depicting the stories of great battles, events, or famous people, for example. Westerosi noble houses have tapestries portraying their family histories that remain in their families for generations,[4] hence some of them having a worn appearance. Many tapestries are likely considered treasured family heirlooms. They are also useful ways of paying homage to and remembering prideful histories down the generations. A tapestry may depict people, events, or times that are now out of favor under the current regime. In that case the important but offending tapestry can merely be stored away if need be, instead of having to be destroyed.[5] Unlike murals or other fixed forms of art tapestries are not tied to the architecture, a tapestry may be removed from a wall and rolled up for transport to another location, or storage.[6][7]

The Free Cities are known for their tapestry making, including in Lys,[8] Myr,[9] Norvos,[8] and Qohor.[8] The artisans of Myr are especially famed for their fine work.[10] The tapestries of Qohor, created primarily by women and children, are seen as the equal of those of Myr, although less expensive.[11] Tapestries are distributed throughout the narrow sea by merchants on trading galleys.[12] 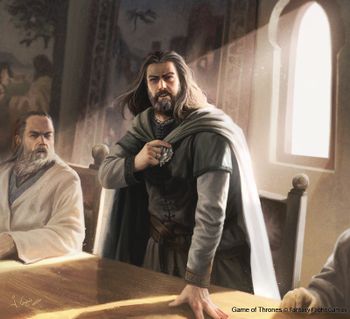 The throne room of the Red Keep is decorated with tapestries depicting hunting and battle,[13] and tapestries from Lys, Norvos, and Qohor decorate the chambers of the small council.[8] The gloomy halls of the castle have faded tapestries.[14] The walls of White Sword Tower are hung with white woolen tapestries.[15] Tapestries also hang in the castle's bedchambers.[16]

The Eyrie is decorated with tapestries, including a dozen splendid tapestries in an arcade.[7]

A tapestry at Old Oak depicts Lord Edgerran Oakheart sitting with the heads of a hundred Dornishmen piled around his feet. The castle also has tapestries depicting Ser Olyvar Oakheart, dying beside King Daeron I Targaryen in Dorne, and Alester Oakheart in the Prince's Pass, blowing a warhorn.[4]

The solar of Lord Tytos Blackwood at Raventree Hall has woolen tapestries.[17]

House Connington has faded tapestries on the walls of the great hall at Griffin's Roost.[18]

Wool tapestries of fruits and flowers are located in Ashford Castle.[19]

The audience chamber at Coldmoat has tapestries depicting tourney scenes and battles.[20]

Tapestries are on the walls of the Hermit's Hole at the Quiet Isle.[21]

Archmaester Marwyn has faded tapestries in his chambers at the Ravenry.[22]

According to legend, the Grey King's Hall had been warmed by Nagga's living fire and on the walls hung tapestries made of silver seaweed.[23]

Queen Alysanne Targaryen bought tapestries and murals from the Free Cities to decorate the Red Keep.[9]

Ser Bennis of the Brown Shield stole coins which Ser Eustace Osgrey had hidden behind a mildewed tapestry at Standfast.[20]

King Robert I Baratheon replaced the skulls of the Targaryen dragons in the Red Keep's throne room with hunting tapestries vivid with greens, browns, and blues.[24][25]

King Robert I Baratheon's hunting tapestries in the Red Keep's throne room are taken down after his death.[26]

Ser Arys Oakheart recalls the tapestries at Old Oak.[4] While discretely meeting Princess Arianne Martell in the shadow city of Sunspear, Arys sees a tapestry of Nymeria and her ten thousand ships.[4]

After the taking of the Shields, Lucas Codd and Quellon Humble tear Lord Humfrey Hewett's tapestries from his hall's wall to serve as cloaks.[27]

Queen Regent Cersei Lannister mentions that she received a letter from Petyr Baelish beseeching her to ship him some old tapestries of Robert's.[6] Later Petyr mentions to Sansa Stark that Cersei is sending him some splendid tapestries.[7]

While traveling to the siege of Riverrun, Jaime stops at Castle Darry. He recalls that when Robert's entourage had traveled north to offer the position of Hand of the King to Lord Eddard Stark at Winterfell, they had stayed at Darry both en route and returning. On the northbound stop, Tyrion Lannister had discovered tapestries depicting all of the kings from House Targaryen, from Aegon I to Aerys II, hidden in the cellar. Tyrion joked that Robert would have made him Lord of Darry if he had revealed their existence to the king, as the Targaryens had been overthrown in Robert's Rebellion.[5] Jaime observes that the castle's walls are still bare after it has been given to his disinterested cousin, Lord Lancel Lannister.[5]

While visiting Daenerys Targaryen, Queen of Meereen, the merchant prince Xaro Xhoan Daxos gifts her with a beautiful tapestry of Essos that has been in his family vaults since before the Doom of Valyria. Xaro uses it in his attempt to persuade her to abandon Meereen and travel by sea to Westeros.[1] Freedwomen give Daenerys a tapestry which she hangs over her bed.[28]

The chambers of King Hizdahr zo Loraq within Meereen's Great Pyramid are decorated with priceless tapestries depicting the glory of the Old Empire of Ghis. The largest shows the last survivors of a defeated Valyrian army passing beneath the yoke and being chained.[2] After slaying the pit fighter Khrazz, Ser Barristan Selmy finds Hizdahr hiding behind one of these tapestries, begging to be spared.[2]

At the Gates of the Moon, Lord Nestor Royce shows Lady Waxley his prize tapestries which had belonged to King Robert and had been given to him by Lord Baelish.[29]

Amerei: Outlaws killed him. Father had only gone out to ransom Petyr Pimple. He brought them the gold they asked for, but they hung him anyway.
Mariya: Hanged, Ami. Your father was not a tapestry.[5]