From A Wiki of Ice and Fire
(Redirected from Targaryen campaign in Slavers Bay)
Jump to: navigation, search

The Targaryen campaign in Slaver's Bay is an ongoing conflict in Essos, mainly in the region of Slaver's Bay. Daenerys Targaryen's main goal is to free the slaves in Slaver's Bay and abolish all slavery. This primary military conflict is mainly depicted in A Storm of Swords and A Dance with Dragons, and continues into the unreleased sixth novel, The Winds of Winter.

Following the death of her husband, Khal Drogo, Daenerys Targaryen manages to hatch her three dragon eggs on his funeral pyre.[3] As Drogo's khalasar has disbanded into several smaller factions, Daenerys sees herself forced to travel through the Red Waste, as she considers the chance of encountering an enemy too large when traveling in any other direction.[4] Daenerys eventually arrives in Qarth,[5] but following the destruction of the House of the Undying and the resulting hostility of the Qartheen, finds herself in need of a new destination.[6] Whilst looking for a passage on a ship at the docks of Qarth, Daenerys is approached by the eunuch Belwas and the squire Arstan Whitebeard (secretly Ser Barristan Selmy from Westeros), who were sent to Qarth by magister Illyrio Mopatis. Illyrio wishes her to return to Pentos, and has sent three ships to Qarth for Daenerys to use.[6]

However, whilst on route to Pentos with her dragons and the remnants of her khalasar, Jorah Mormont convinces Daenerys to change course to Astapor instead, arguing that she will need an army to conquer Westeros. Jorah believes she should buy Unsullied, slave soldiers trained and sold in Astapor with an extraordinary reputation.[7] In Astapor, Daenerys inspects the Unsullied, but is sickened by the misery of the slave trade.[8] However, she agrees to acquire all the Unsullied available - eight thousand six hundred - as well as the boys still in training - an additional five thousand - in exchange for her three ships, all trading goods on board, and the strongest of her dragons: Drogon.[9]

The Targaryen campaign in Slaver's Bay is a multisided conflict, during which many factions make alliances and change sides on numerous occasions. The following main factions participate in the conflict:

In search of an army, Daenerys Targaryen arrives in Astapor where she is disgusted by the training and the treatment of the slave soldiers, the Unsullied, and the treatment of slaves in general. Nonetheless, she strikes a deal with the Good Masters of Astapor, promising her three ships, all her trading goods, and the strongest of her three dragons, Drogon, in exchange for all Unsullied present in the city, both those who have completed their training, and those who are still in training.[9]

The Fall of Astapor
By Majoh.

While Daenerys conquers Meereen, a former butcher from Astapor named Cleon convinces his fellow Astapori that the council of three men (a healer, a scholar and a priest) that Daenerys had left to rule Astapor intended to return the Good Masters to their positions of power. Naming himself king after having the council executed, Cleon has all highborn boys seized to begin training new Unsullied. Each pyramid within Astapor becomes an armed camp, the dead lie in the streets, and the markets are devoid of food and slaves.[13] When she learns about Astapor's troubles, Daenerys chooses to remain in Meereen and installs herself as queen, taking the Great Pyramid as her seat.[13]

Following Daenerys's departure from Yunkai, the Yunkai'i returned to slavery.[10] The city begins to prepare for the upcoming conflict by hiring new sellsword companies, i.e. the Long Lances, the Windblown, and the Company of the Cat.[17] They send envoys to Qarth and other cities spreading false tales about Daenerys in order to gain support to cast her down. Grazdan mo Eraz travels to Volantis to persuade the triarchs to send their fleet against Daenerys, and other envoys ally Yunkai with New Ghis, Tolos, Elyria, and Dothraki.[18]

Meanwhile, several factions set sail towards Daenerys. Prince Quentyn Martell has been sent to Slaver's Bay by his father, Prince Doran Martell,[17] with a marriage pact signed by his uncle, Prince Oberyn Martell, on Doran's behalf, and by Ser Willem Darry. The pact promises the hand of Princess Arianne Martell, Quentyn's elder sister, to Viserys Targaryen, Daenerys's older brother.[19] With Viserys dead, Doran hopes to marry Quentyn to Daenerys, and so ally Dorne to the cause of House Targaryen.[19] However, Quentyn meets with troubles on his journey, and once in Volantis, is unable to find a ship to Slaver's Bay, due to the war.[17] Quentyn and his two remaining companions eventually join the Windblown, a sellsword company hired by Yunkai to fight against Daenerys, in order to get closer to her.[20] 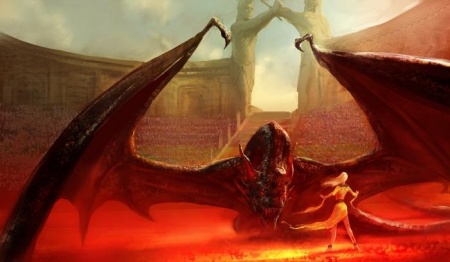 After Daenerys's departure on Drogon, Hizdahr has taken over the rule of Meereen. Hizdahr has removed many of Daenerys's people from command, and angered Grey Worm, resulting in the loss of the Unsullied. Skahaz mo Kandaq, who has been stripped of his command of the Brazen Beasts by Hizdahr, contacts Barristan Selmy and informs him that Hizdahr's confectioner has confessed to having poisoned the locusts on behalf of the Sons of the Harpy, who had threatened to kill his daughter. As Daenerys survived, his daughter was killed. Skahaz has been gathering support against Hizdahr, but needs Barristan to bring the Unsullied to their side. Barristan agrees.[26] Following the accidental death of Yunkai's Supreme Commander Yurkhaz zo Yunzak in Daznak's Pit, the Yunkai'i speak of a breach of the peace, and present Hizdahr with Groleo's severed head in response. They return three hostages - all family to Hizdahr - as a show of good faith, while promising to return the other three after Hizdahr has slain the dragons.[27] Barristan and Skahaz agree to imprison Hizdahr, as well as Reznak mo Reznak and rule Meereen by a council.[28] In the meantime, Prince Quentyn Martell has contacted the Tattered Prince and enlisted his help in capturing Daenerys's dragons, as to not return home empty-handed.[29] Their plan, however, occurs the same night as the plan of Barristan and Skahaz. Quentyn and several of the Windblown go to the pit where Viserion and Rhaegal remain. They attempt to lure a dragon, but the dragons attack. The Windblown flee, and Quentyn is mortally injured.[30] While Barristan is confronting Hizdahr about his role in the poisoning attempt of Daenerys, a cupbearer informs them that the dragons have been loosened on the city.[28]

Following Hizdahr's arrest, the Yunkai'i resume their siege of Meereen. Additionally, the Sons of the Harpy have resumed their killing. Barristan sends Galazza Galare to the Yunkai'i to negotiate, but realises that the Yunkai'i are not likely to agree to any terms, and that it will eventually come to battle. He enlists Gerris Drinkwater and Archibald Yronwood, who had been imprisoned following their failed attempt to steal a dragon, to act as his contact to the Tattered Prince, offering Pentos in return for the loyalty of the Windblown. When Galazza returns, she informs Barristan that the Yunkai'i will only accept the death of the dragons in return for the peace. At the same time, the Yunkai'i begin to fling corpses into Meereen, using the trebuchets.[31]

Drogon brings Daenerys to a hill in the Dothraki Sea, which she dubs "Dragonstone", after the place where she was born. Daenerys begins her journey back to Meereen, but has to go on foot, as Drogon refuses to listen to her. She eventually spots a Dothraki scout, from who she is able to remain hidden. The rider flees upon sighting Drogon, who returns to Daenerys's side. Daenerys mounts Drogon, who flies over the Dothraki khalasar and hunts down a horse. Daenerys and Drogon feed on the roasted horse. The khalasar of Khal Jhaqo eventually finds her, standing beside her dragon.[32]

While Daenerys attempts to return to Meereen, Yunkai and Meereen prepare for battle. Victarion Greyjoy, sent to Slaver's Bay by his brother, King Euron I Greyjoy, to bring Daenerys back to Westeros as Euron's bride,[33] is about to arrive.[34] Having learned of Daenerys's troubles during his journey, Victarion and his fleet prepare to enter the battle on the side of Meereen. Victarion has a horn, Dragonbinder, in his possession, which he believes will bind one or more dragons to his will.[35]

The battle of Slaver's Bay is set to be one of the opening-battles of The Winds of Winter.[36]