From A Wiki of Ice and Fire
(Redirected from The Great Ranging)
Jump to: navigation, search 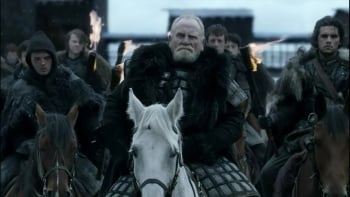 The great ranging's goals are: 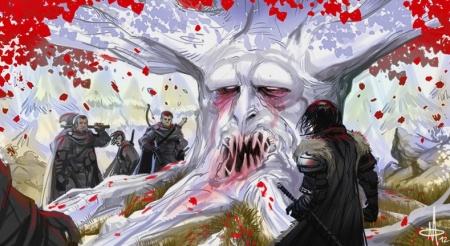 The expedition passes seven deserted wildling villages, the fourth of which is Whitetree, before arriving at Craster's Keep, where the expedition camps for the night. There they learn that the villages are empty because Mance Rayder is gathering all the free folk in the Frostfangs with the intent to strike at the Wall as the wildling chieftains have done in the past. It is the stated that the most recent invasion was led by Raymun Redbeard.[4]

Lord Commander Mormont decides they will camp at the Fist of the First Men‎ and await Qhorin Halfhand and the men from the Shadow Tower. Qhorin's party arrives late after running into a wildling scouting party led by Alfyn Crowkiller. They were successful in stopping the wildlings from reporting back to Mance, at the cost of four men and a dozen wounded. A prisoner taken in the battle revealed that Mance is searching for some magic to bring down the Wall.

After Qhorin finally makes it to the rendezvous point, it is decided to send three scouting parties into the Frostfang mountains to discover the size of the host and what Mance is looking for, led by Jarmen Buckwell, Thoren Smallwood, and Qhorin.

Disaster at the Fist and Retreat

Main article: Fight at the Fist

Shortly after the return of Thoren Smallwood's team, the expedition is attacked at the Fist of the First Men‎ by wights.[5] After an unsuccessful counterattack, due to being caught unaware and ill-prepared to fight an unfamiliar foe, Lord Commander Mormont rallies about fifty brothers onto horseback to break out of the Fist in a tactical retreat. It is assumed that the brothers who were unable to form up with Mormont's retreat were all slaughtered by the wights.

As the horses become more tired and the weather worsens, the Lord Commander organizes the injured to be put on horseback and sets the able men walking with torches to guard the flanks and rear. Fortunately the wights do not give an effective pursuit, only nibbling at the stragglers. It is during this march south that the Watch rediscovers the effect of dragonglass on the Others; Samwell Tarly, Small Paul, and Grenn are among the stragglers and in self defense, Samwell stabs an Other by mistake, causing the creature to dissolve.[6]

Forty-four brothers, twelve of them seriously injured, survive the wight and Other attacks and are able to reach Craster's Keep. However, morale is low and food is scarce. Although Craster offers them some food, many of the disgruntled members of the group claim Craster is holding out on them, and they eventually draw their weapons. Craster tries to fight them but is killed by Dirk. Lord Commander Jeor Mormont, who tries to intervene, is killed as well by Ollo Lophand, which leads to a brawl between the mutineers and the loyalists.[7] About a dozen loyalists decide to retreat and manage to return to Castle Black;[8] Samwell Tarly and Gilly also manage to escape.[9]

Nearly a third of the Night's Watch's strength, including most of its command and experienced fighting force, are lost. With less than thirty brothers to return to the Wall after the disaster at the Fist of the First Men, the mission is considered a failure. With tens of thousands of wildlings still marching on the Wall, the depleted force must rely on ingenuity and new leadership to survive any further engagements with hostiles beyond the Wall.

The following men are known to have survived the great ranging: