The Last of the Giants 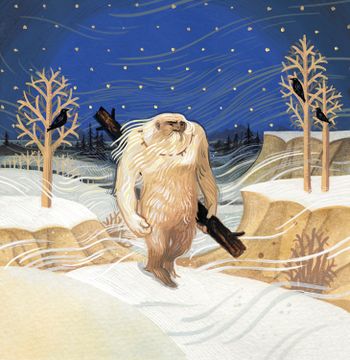 The Last of the Giants wanders alone in winter, by Serena Malyon © Fantasy Flight Games

Ooooooh, I am the last of the giants,
my people are gone from the earth.
The last of the great mountain giants,
who ruled all the world at my birth.
Oh the smallfolk have stolen my forests,
they’ve stolen my rivers and hills.
And the’ve built a great wall through my valleys,
and fished all the fish from my rills.
In stone halls they burn their great fires,
in stone halls they forge their sharp spears.
Whilst I walk alone in the mountains,
with no true companion but tears.
They hunt me with dogs in the daylight,
they hunt me with torches by night.
For these men who are small can never stand tall,
whilst giants still walk in the light.
Oooooooh, I am the LAST of the giants,
so learn well the words of my song.
For when I am gone the singing will fade,
and the silence shall last long and long.[1]

The war band of Tormund Giantsbane sings "The Last of the Giants" to Jon Snow, who is unfamiliar with the song.[1]

Jon thinks of the song after discovering that Mag Mar Tun Doh Weg and Donal Noye killed each other during the battle beneath the Wall.[2]

Jon again thinks of the song while speaking with Ser Godry Farring, who is now called Godry the Giantslayer after killing a small giant.[3]