"The North Remembers" is the name of the first episode of the second season of the HBO medieval fantasy television series Game of Thrones. It is written by David Benioff and D. B. Weiss, the executive producers of the series, and directed by Alan Taylor, a co-executive producer of the series. it will premier on April 1, 2012.

The eldest living brother of the late King Robert, Stannis Baratheon (Stephen Dillane), announces himself as rightful heir to the Iron Throne. From his court at the island of Dragonstone, he sends a letter to all the corners of the Seven Kingdoms announcing that Joffrey, Tommen, and Myrcella are not Robert's true heirs, but rather the products of incest between Cersei Lannister and her twin brother Jaime. Stannis, though, refuses to seek an alliance with the other claimants (including his younger brother Renly), as his advisor Davos Seaworth (Liam Cunningham) urges, as he sees them as usurpers; Stannis insists that all will bend the knee to him or be destroyed.

Stannis's maester, Cressen, is preoccupied with Stannis's late decisions and especially with the influence that the priestess Melisandre (Carice van Houten) has over him. Having come under the influence of the Red Priestess and her god, the Lord of Light, Stannis has even converted to the new religion and has ordered the burning of the statues of the Westerosii Seven Gods. Willing to sacrifice himself for Stannis's sake, Cressen puts poison in a cup and asks Melisandre to drink from it after he has done so. While he dies almost immediately, the priestess swallows the entire cup unaffected.

During a tournament held to celebrate King Joffrey's name day, a captive Sansa Stark deftly saves the drunkard Ser Dontos's life by convincing Joffrey to make him a fool instead of killing him. The proceedings are interrupted by Tyrion Lannister (Peter Dinklage|), who returns to the capital to act as Hand of the King in his father's stead. Cersei (Lena Headey) is furious with this, but accepts the new situation after her brother assures her that he will only act as an advisor. When Tyrion learns that Cersei has let Arya Stark escape after the execution of her father, he mocks her for throwing away two valuable hostages, as he'd planned to trade the girls for Jaime.

Following his ascension to the Throne, Joffrey is becoming uncontrollable, even by his own mother. After defying her authority and reading Stannis's letter, he orders the City Watch to murder all of King Robert's illegitimate children. Although Gendry was already out of the City, his old master smith reveals that he is in a caravan traveling to the Wall.

At the Northern camp

King Robb Stark (Richard Madden) visits his prisoner Jaime Lannister (Nikolaj Coster-Waldau), informing him that he has received Stannis's letter about Joffrey being Jaime's son, and the reasons why Bran was crippled and his father was killed. Robb also informs him that he intends to send his cousin, Alton Lannister, who also has been captured by the Northern army, with terms for a peace. His demands include the release of his sisters, the return of the remains of Eddard and his household, and the acknowledgement of the Northern independence.

Although he has defeated the Lannisters three times on the battlefield, Robb knows that he cannot beat them alone. For this reason, he agrees to send Theon Greyjoy (Alfie Allen) to his father, Balon, to convince him to join them with all the naval force of the Iron Islands. And although his mother, Catelyn Tully (Michelle Fairley), wished to return to Winterfell to be with her other sons, Robb asks her to travel to King Renly's court to negotiate an alliance. Catelyn also warns her son that Balon Greyjoy cannot be trusted, and tells him that his father would be proud of what he has accomplished

Bran Stark (Isaac Hempstead-Wright) is learning how to be Lord of Winterfell while his brother is away at war. He has a strange dream, where he sees himself as Summer, his direwolf, running in the Godswood. The next morning, he goes to the godswood with Osha (Natalia Tena), who tries to pry about his dreams, but Bran ignores her questions. The pair notice a comet in the sky; Osha remarks that the men are all claiming it is an omen of victory for one side or another in the war, but she insists it means one thing; dragons have returned.

The ranging party that set out from Castle Black reaches Craster's Keep, a settlement some distance north of the Wall. Craster provides information on the wildlings and their leader, King-Beyond-the-Wall Mance Rayder, claiming that Rayder is amassing an army in the mountains and intends to move south. Lord Commander Jeor Mormont (James Cosmo) offers leadership advice to Jon Snow (Kit Harington) due to Jon's disgust that Craster's daughters are also his wives.

Across the Narrow Sea

With the remnants of Drogo's khalasar, Daenerys Targaryen (Emilia Clarke) is crossing the Red Waste hoping to find some shelter. The trip is hard, with her newborn dragons not willing to eat the meat they are offered, and horses dying of exhaustion. Finally, Daenerys takes the resolution to send three riders with their remaining horses to explore in three separate directions.

The episode was written by producers David Benioff and D. B. Weiss, based on the original work of George R. R. Martin. As the second season covers mostly A Clash of Kings, the second book of the series, the first episode adapts the material from the first chapters of book including the Prologue, Sansa I, Tyrion I, Bran I, Catelyn I, Davos I, the first half of Daenerys I and Jon III (chapters 0, 2, 3, 4, 7, 10, 12, and 23). Two chapters from the beginning of the book had already been included in season 1's finale, and Jon Snow's story is being pushed forward.[1]

The main differences between the books and the show include the exclusion of the Frey wards from Bran's storyline (they have not been cast), the order of the events in Dragonstone (the books have Maester Cressen die before the burning of the Seven) and the name change of the Lannister cousin (Cleos Frey has been named Alton Lannister to avoid confusing viewers with the intricacies of the Lannister household marriages).

The main scenes created for the show are Robb and Jaime's confrontation at the cell, Cersei and Littlefinger's debate about the root of power, and Joffrey's defiance to his mother at the throne room.[1]

Dillane, Cunningham, and van Houten are added to the main cast. Season 1 actors John Bradley-West (Sam Tarly), James Cosmo (Jeor Mormont), Jerome Flynn (Bronn), Conleth Hill (Varys), and Sibel Kekilli (Shae) are all upgraded to the main cast as of this episode, having been recurring in season 1. Peter Dinklage takes the place of Sean Bean as the first credit during the intro sequence. 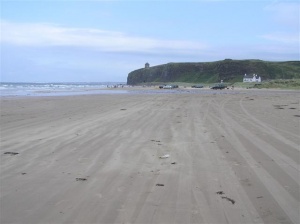 Downhill Strand was used to represent a beach of the island of Dragonstone, where the statues of the Seven were burned.

The production continued using the Paint Hall studios as the filming headquarters and the Northern Irish landscapes for many of the exterior shots. The burning of the Seven was filmed at the beach of Downhill Strand, where local press echoed the stir that the filming caused to the small community of Castlerock.[2] Craster's keep beyond the Wall was built at a forest in Clandeboye Estate.[3]

For the exteriors of the capital city of King's Landing, that had been doubled for w:Malta for the entire season 1, now the production flew to the Croatian city of Dubrovnik. Known as The Pearl of the Adriatic, the city proved to be very good to represent King's Landing as it shared a lot of characteristics with the fictional capital: it had a well-preserved medieval look, with high walls and the sea at its side. According to David Benioff, executive producer of the show, “The minute we started walking around the city walls we knew that was it. You read the descriptions in the book and you come to Dubrovnik and that’s what the actual city is. It has the sparkling sea, sun and beautiful architecture.” [4]

This page uses content from the English Wikipedia. The original content was at The North Remembers. The list of authors can be seen in the page history of The North Remembers. As with A Wiki of Ice and Fire, the content of Wikipedia is available under the Creative Commons Attribution-ShareAlike License.