The Princess and the Queen

The Princess and the Queen, or, the Blacks and the Greens is a novella published on December 3, 2013 as part of the Dangerous Women anthology, edited by George R. R. Martin and Gardner Dozois. It replaced the fourth in the series of "Dunk and Egg" stories tentatively named The She-Wolves of Winterfell. It is the history of the civil war known as the Dance of the Dragons as written by Archmaester Gyldayn of the Citadel of Oldtown.[1] It was later slightly expanded and incorporated into Fire & Blood.[2]

For a full summary on the war of succession, which this novella partly describes, see the Dance of the Dragons 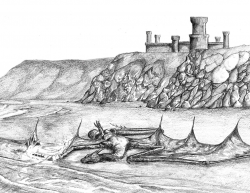 The story begins on the third day of the third month of 129 AC, when King Viserys I Targaryen dies in his sleep. Queen Alicent Hightower and Lord Commander Criston Cole are the first to be notified of the death of the king, but instead of warning the silent sisters and making preparations for Viserys's cremation, they lock the king's rooms, post guards, arrest everyone who knows about the death of Viserys and assemble the small council. There, instead of preparing to warn Princess Rhaenyra Targaryen, Viserys's heir as proclaimed in his will, and the current Princess of Dragonstone, they begin to discuss the coronation of Alicent's eldest son by Viserys, Prince Aegon.

Rhaenyra, confined at Dragonstone due to being pregnant for six months, goes into labour when hearing how her father has died and her half-brother has been crowned king. The female child, Visenya, is stillborn, leaving Rhaenyra more furious than before.

Both sides try to find allies, and both sides reach out to Lord Borros Baratheon, with Aegon's greens sending Prince Aemond Targaryen, and with Rhaenyra's blacks sending Prince Lucerys Velaryon. Borros refuses Lucerys, and to make matters worse, Aemond chases Lucerys on his dragon Vhagar and kills both Luke and Arrax. This leads to Prince Daemon Targaryen, Rhaenyra's husband, countering the greens by arranging the murder of six-year old Prince Jaehaerys, in front of his mother Helaena, his brother Maelor, his sister Jaehaera, and his grandmother Alicent. These two events mark the end of the possibility that this war of succession will be resolved peacefully. The fighting begins.

The Dance of the Dragons lasts for almost two and a half years, of which The Princess and the Queen covers the first two. It is the first civil war during the Targaryen dynasty, and sees the deaths of many Targaryens and dragons.