From A Wiki of Ice and Fire
(Redirected from Thoros of Myr)
Jump to: navigation, search

Thoros of Myr is a red priest of R'hllor from the Free City of Myr, and a member of King Robert I Baratheon's court at King's Landing. In the television adaptation Game of Thrones he is portrayed by Paul Kaye.

The genial Thoros enjoys wine,[7] joking that he became a red priest because the robes would hide winestains.[1] He is fond of feasts and tourneys,[4] has a gift for tongues,[2] and has some success seeing visions in flames.[2]

Thoros has a reputation as a brave madman with an absurd but dangerous firesword.[6][4] The red priest is a great friend of King Robert I Baratheon.[4]

Thoros was born in the Free City of Myr, the youngest of eight children, and he was given to a red temple of R'hllor at a young age. He earned his priesthood but was never overly pious due to his tastes for fighting, drinking, and women. Thoros was sent to King's Landing in hopes he could convert the fire-obsessed King Aerys II Targaryen, but he was unsuccessful and started to question his own faith.[2]

During Robert's Rebellion, Thoros was present[3] when the corpses of Aegon and Rhaenys Targaryen, clothed in red cloaks to hide their wounds, were presented by Lord Tywin Lannister to Lord Robert Baratheon before the Iron Throne.[8] Thoros has never forgotten Ser Gregor Clegane's brutality during the Sack of King's Landing.[3]

Thoros became a frequent drinking companion of the new king, Robert I.[2] During Greyjoy's Rebellion, Thoros earned recognition for being the first over the wall at Pyke.[5]

Thoros is a frequent tourney mêlée champion, using cheap swords set aflame with wildfire to spook the other combatants' horses.[6] Three times Thoros defeated Sandor Clegane in the mêlées.[3] At the tourney on Prince Joffrey's name day, Thoros was defeated by Lord Yohn Royce with a common mace after the fire of his sword guttered out.[9] Tobho Mott, displeased with the burning of swords, overcharges Thoros for replacements,[4][2] but Robert is glad to provide for his friend.[10]

Thoros of Myr before joining the brotherhood, by The Mico ©.

Sansa Stark and Jeyne Poole giggle at Thoros in the Hand's tourney, where he unhorses Lord Beric Dondarrion.[5] Thoros wins the melee, which lasts three hours.[6]

Lord Eddard Stark, Hand of the King, tasks Thoros with recruiting twenty men to join the party of Beric, which is to seek out Ser Gregor Clegane and bring him to the king's justice.[11]

When war breaks out, Beric and Thoros raid the foraging parties of Lord Tywin Lannister.[12][13] Both are named among those who must swear fealty to the newly-crowned King Joffrey I Baratheon or be adjudged traitors.[14]

While Beric's band forages in the riverlands, Thoros pays smallfolk with paper notes.[15] 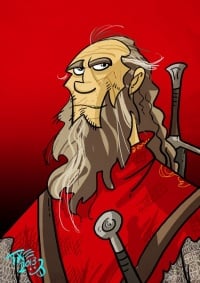 Thoros of Myr after joining the brotherhood, by The Mico ©.

Harwin tells Arya Stark of the battle at the Mummer's Ford, when Gregor ambushed Beric's party. Thoros rallied Beric's horsemen and allowed Beric to escape. Thoros removed Gregor's lance from Beric and tried to treat the wound,[16] but the Lord of Blackhaven succumbed. While performing the last kiss, a traditional burial ritual of his faith, Thoros inadvertently resurrected Beric. The two men founded an outlaw group, the brotherhood without banners, to protect the smallfolk from soldiers foraging in the riverlands.

The spiritually-reawakened Thoros continues to resurrect Beric through means beyond his understanding,[17] and he has greater success seeing visions in flames.[2] The red priest leads his fellow outlaws in prayers to R'hllor, the Lord of Light.[3]

After some time spent in the brotherhood, Thoros becomes loose-skinned and grey-haired, wearing faded robes and piecemeal armor.[3] He drives a flock of sheep to Acorn Hall to aid Lady Ravella Smallwood.[4] The Peach offers its services to Thoros and his companions without charge.[18]

Thoros revives Beric after the lightning lord is slain by Sandor Clegane in trial by combat within the hollow hill.[3] The red priest fights with a flaming sword during the battle at the burning septry,[17] and he accompanies Beric to meet the ghost of High Heart.[2] Thoros has a vision of the siege of Riverrun.[2]

After fighting Rorge and Biter at the crossroads inn, Brienne of Tarth is captured by the brotherhood. Thoros explains that when the brotherhood found the body of Lady Catelyn Stark after the Red Wedding, he refused to give her the last kiss and revive her. Beric passed the flame of life to Catelyn's corpse instead, and the so-called Lady Stoneheart now leads the brotherhood after Beric's passing. Her motives and methods lower Thoros's spirits.[19]

Sandor: Thoros of Myr. You used to shave your head.
Thoros: To betoken a humble heart, but in truth my heart was vain. Besides, I lost my razor in the woods. I am less than I was, but more. A year in the wild will melt the flesh off a man. Would that I could find a tailor to take in my skin. I might look young again, and pretty maids would shower me with kisses.[3]

Yet I am not the false priest you knew. The Lord of Light has woken in my heart. Many powers long asleep are waking, and there are forces moving in the land. I have seen them in my flames.[3]

Beric: Thoros, how many times have you brought me back now?
Thoros: It is R'hllor who brings you back, my lord. The Lord of Light. I am only his instrument.[17]

Gendry: My master said you were a sot and a fraud, as bad a priest as there ever was.
Thoros: That was unkind. True, but unkind.[2]

Brienne: You are the Myrish priest. The red wizard.
Thoros: The pink pretender, rather. I am Thoros, late of Myr, aye ... a bad priest and a worse wizard.[19]

—Brienne of Tarth and Thoros

Justice. I remember justice. It had a pleasant taste. Justice was what we were about when Beric led us, or so we told ourselves. We were king's men, knights, and heroes ... but some knights are dark and full of terror, my lady. War makes monsters of us all.[19]

—Thoros to Brienne of Tarth

The red wizard. I've heard tell he has strange powers.[1]

Anguy: Thoros herding sheep?
Ravella: I grant you it was an odd sight, but Thoros claimed that as a priest he knew how to tend a flock.[4]

Arya: He isn't very priestly, is he?
Gendry: No. Master Mott said Thoros could outdrink even King Robert. They were pease in a pod, he told me, both gluttons and sots.[4]

A grievous wound, aye, but Thoros healed it. There's never been no better healer.[17]