Timett is a red hand, a type of war chief, of the Burned Men, one of the most-feared Vale clans of the Mountains of the Moon. He is commonly known as Timett son of Timett, after his father,[2] and is also called Timett One-Eye.[3]

Timett is a tall, fierce young man with a burned out left eye, which has been left an empty pit.[4] He is not yet twenty years of age.[2]

During the rite of manhood for his clan, Timett burned one of his eyes out of its socket with a hot knife. Because the typical sacrifice for the rite is a nipple or finger, the impressed clan elders immediately named him a red hand of the tribe. Timett was young for this position, but he inspired fear even among his fellow clansmen.[2]

Timett joins the group of Vale mountain clansmen who choose to follow Tyrion Lannister and join the army of Lord Tywin Lannister. He serves as the leader of the Burned Men in the group.[2] Timett fights in the battle on the Green Fork, vaulting from his horse when it dies during the charge. After the battle, he loots the bodies of the slain with his Burned Men.[6] 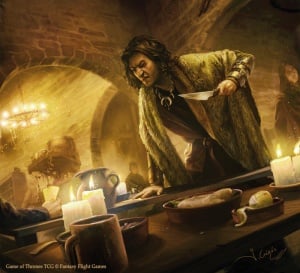 Timett follows Tyrion to King's Landing. While gambling on the Street of Silver, Timett catches a wineseller's son cheating at tiles. Timett pins the man's wrist to the table with a dagger and then tears out his throat barehanded.[5]

Timett becomes one of Tyrion's chief enforcers, along with Bronn and Shagga, during Tyrion's tenure as Hand of the King. He participates in Tyrion's intimidation of Grand Maester Pycelle.[4]

Before the Battle of the Blackwater, Tyrion sends Timett with the rest of the remaining clansmen to the kingswood, where he raids enemy forces.[7]

Timett attempts to return to King's Landing to serve Tyrion, but is driven off because of Tyrion's injury. He and his men instead return to the Mountains of the Moon with their plunder from Stannis Baratheon's camp at the Blackwater.[8]

When Sandor Clegane attempts to enter the mountains to travel to the Eyrie, he is warned off by locals, one of whom states how ferocious the mountain clans have become after Timett One-Eye's return.[3]

During the trial of Tyrion for the death of King Joffrey I Baratheon, Tyrion's lover Shae is the last witness for the Crown. She claims that Tyrion had ordered Timett and Shagga to forcefully bring her to Tyrion after the battle on the Green Fork.[9] In actuality, she was a willing camp follower found by Bronn.[6]

The Burned Men fear nothing. Timett son of Timett will ride with the lions.[2]

If a man was mad enough to put out his own eye, he was unlikely to be gentle to his enemies.[2]