Tyrion II (The Winds of Winter) 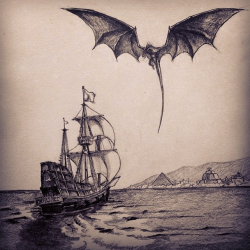 Tyrion is in the encampment of the Second Sons, awaiting his battle orders with the other men. The battle has already begun, and the dragons Rhaegal and Viserion are flying overhead. The Ironborn have arrived in Slaver's Bay; Tyrion can hear the clash of warships, and a fire ship has blocked the mouth of the Skahazadhan.

Tyrion reflects on his first battle at the Green Fork. He remembers this battle more clearly than the Battle of the Blackwater. The Second Sons are preparing themselves for battle, and Tyrion is reminded of Bronn when he observes Snatch scratching himself and making jokes. Despite his previous assertions that he did not care whether he lived or died, Tyrion has come to realise that he does care.

Back in the tent, Penny is arming herself for the battle too. Penny helps him with his own armour, as he reveals the foolish strategy of the current Yunkish Supreme Commander. While reminiscing about the Battle of the Green Fork, Penny kisses him. This angers Tyrion, so much so that he is prepared to kill her if he had a weapon. His murderous rage is disrupted by the sounds of Rhaegal circling over the bay, while ships are clashing. Viserion has the attention of the Sellswords as he roasts and consumes the corpses being thrown by the Wicked Sister. A messenger arrives from the Supreme Commander of the Yunkai'i, Gorzhak zo Eraz. He demands that Brown Ben Plumm bring his company to the Bay shore to defend the Slaver ships. Inkpots points out that Brown Ben is with Malazza, the Girl General and he is the only one who can command the Second Sons. The messenger departs, and Tyrion and Jorah Mormont attempt to persuade the sellswords to turn their cloaks again. Brown Ben returns and calls a meeting with his captains, which Tyrion and Jorah attend. Malazza has commanded the Second Sons to defend Wicked Sister. Barristan Selmy is making for the Harridan and Marselen's freedmen have defeated the Long Lances, destroying the Ghost in the process.

Another messenger from Morghar zo Zherzyn arrives to inform the Second Sons that Bloodbeard and two Ghiscari legions are defending the Harpy's Daughter from the advancing Unsullied. The Second Sons are to sweep behind and take the Unsullied in the rear. Zheryn is the new Supreme Commander, Gorzhak having been slain by the Prince of Tatters; the Windblown have turned their cloaks. The messenger recognises Tyrion as an escaped slave of Yezzan zo Qaggaz and orders the Second Sons to surrender him. Jorah responds to this by killing the messenger. He falls on the cyvasse table, knocking the white dragon to the floor, which Tyrion picks up. Brown Ben Plumm declares that they have always been Queen's men, and joining the Yunkai'i was just a ploy.[1]