Utt is a disgraced septon and lieutenant[1] of the Brave Companions mercenary company.[1]

Utt is a balding, slender, round-shouldered man who wears black chainmail over grey septon's robes.[3][4] He is an acknowledged pedophile known for his preference of little boys.[5]

According to Shagwell, Utt kills his child victims once he is done with them, although he weeps and prays for forgiveness and often asks other members of Brave Companions to whip and scourge him, which they often do as they find it amusing.[4] 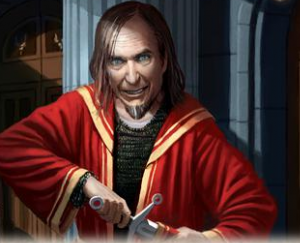 Utt is one of the many members of the Brave Companions mercenary company that arrives at Harrenhal under the employ of Tywin Lannister.[3] With the Brave Companions he changes sides and serves under Lord Roose Bolton in Harrenhal.[5] As lieutenant, he leads one of Vargo Hoat's four foraging parties to root out Lannister forces, where his camp is attacked by a pack of wolves.[5]

Utt leads another foraging party of around thirty-odd men out into the riverlands, where his men rape and reave the local populace and murder several septons of a remote village septry. His group is eventually defeated by the brotherhood without banners and he is captured, having being found hiding in the cellar of the burning septry. Utt is given a swift trial, in which he confesses his crimes before he is hanged.[4]

I am a weak reed. I pray to the Warrior for strength, but the gods made me weak. Have mercy on my weakness. The boys, the sweet boys … I never mean to hurt them …[4]