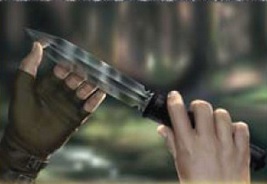 An unnamed Valyrian steel dagger is the weapon used by a catspaw during an assassination attempt on Bran Stark.[1] Although the blade is plain, it is finely made of Valyrian steel and has a smooth dragonbone hilt.[2][3]

King Robert I Baratheon won the dagger from Lord Petyr Baelish during the tourney on Prince Joffrey's name day.[4][5][3] It is unknown where Petyr originally acquired the dagger, or if it had any significance before he owned it. 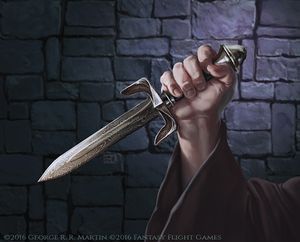 A catspaw sets a fire in Winterfell's Library Tower as a distraction and then tries to assassinate the comatose Bran Stark. Bran's mother, Catelyn, fends off the assassin and the boy's direwolf, Summer, kills the catspaw. The blade cuts Catelyn's fingers almost to the bone.[1]

Believing that House Lannister is to blame,[1] Catelyn and Ser Rodrik Cassel travel to King's Landing with the blood-stained knife to inform Lord Eddard Stark, the Hand of the King to Robert I Baratheon.[5] Rodrik first discusses the dagger with Ser Aron Santagar, the master-at-arms of the Red Keep, through which Lord Varys realizes Catelyn is in the capital. Varys informs Lord Petyr Baelish, who has Catelyn summoned to them. Varys nicks his finger with the knife, and Petyr reveals that he had once owned the blade. Petyr states he lost it to Tyrion Lannister during the tourney on Prince Joffrey's name day, however, when Ser Loras Tyrell defeated Tyrion's brother, Ser Jaime Lannister, in the lists.[5] When Petyr and Catelyn discuss the dagger with Eddard, Petyr tells them that the dagger alone is not enough to prove House Lannister was behind the assassination attempt, and advises Eddard to get rid of the dagger.[2] Eddard keeps the blade when his wife departs the capital.[2]

Tyrion is taken prisoner by Catelyn at the crossroads inn[6] and brought to the Eyrie, where he wins a trial by combat.[7] During his journeys, Tyrion insists to Catelyn[8] and Bronn[9] that he never owned the dagger, and that he would always bet on Jaime during a tourney, never against him.[8]

When King Robert returns mortally wounded from his hunt in the kingswood, Eddard sheaths the Valyrian dagger at his waist.[10] Petyr suggests to Eddard that they should gather support to seize Robert's children as Robert lays dying, to give them control over the kingdom. Eddard reminds Petyr of the men the Lannisters have killed, and shows him the dagger used in the attempt on Bran's life.[10]

After the death of King Robert, his widow, Queen Cersei Lannister, gains the support of Petyr and Janos Slynt and his gold cloaks. When Eddard confronts Cersei in the throne room and is taken captive, Petyr takes the dagger Eddard wears at his hip and shoves it under his chin.[11] 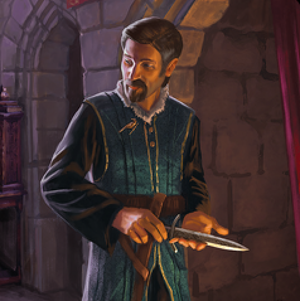 Tyrion Lannister, the acting Hand of the King for Joffrey I Baratheon, desires to confront Petyr Baelish about the dagger.[12] At some point, Petyr waits for Tyrion in his chambers at the Tower of the Hand, where he offers the dagger to Tyrion as a gift. Tyrion declines, and realizes that Petyr is aware of the fact that Tyrion knows of his lie to House Stark.[13]

When Petyr Baelish berates Tyrion about being lied to and tells him to leave him out of his deceptions in the future, Tyrion thinks he will only if it's mutual, noticing Petyr bearing the dagger sheathed at his hip.[14]

In Riverrun's dungeon, Ser Jaime Lannister admits to having flung Bran Stark from the First Keep of Winterfell but denies Catelyn's accusation he later hired the catspaw to kill Bran. Jaime also insists that Tyrion would never have bet against him during Joffrey's tourney, contradicting Petyr's claim that Tyrion won the dagger from Petyr by betting on Ser Loras Tyrell instead of Jaime. Jaime recalls the dagger changing hands, however, as a drunken King Robert I Baratheon had displayed it at the tourney's feast.[3]

While discussing the new swords (Widow's Wail and Oathkeeper) made by Tobho Mott from Eddard Stark's Valyrian sword, Ice, Lord Tywin Lannister tells his son Tyrion that King Robert had a hundred daggers in his armory, but that the only knife the king ever used was a hunting knife he received in his youth from Lord Jon Arryn.[15]

After receiving Widow's Wail from Tywin as a wedding gift, King Joffrey I claims that he is "no stranger to Valyrian steel".[16] Tyrion later concludes that Joffrey was behind the assassination attempt on Bran Stark, deducing that the then-prince had taken the plain-looking dagger, which Robert had forgotten after winning it from Petyr at the tourney, from the king's baggage train and given it to a lackey at Winterfell.[17]

Petyr Baelish uses the dagger to cut fruit, while talking to Sansa Stark about truth and lies and hidden plots.[18]

After Joffrey's death at his royal wedding, Cersei and Jaime discuss the assassination attempt on Bran. Jaime concludes that Joffrey tried to have the crippled Bran killed as a misguided attempt to impress Robert.[19] When Jaime frees Tyrion from the Red Keep's dungeon, the brothers agree that Joffrey had been responsible.[20]

Petyr: Nothing holds an edge like Valyrian steel. Such sweet balance. You want to find the owner, is that the reason for this visit? You have no need of Ser Aron for that, my lady. You should have come to me.


Catelyn: And if I had, what would you have told me?


Petyr: I would have told you that there was only one knife like this at King's Landing. It's mine.[5]
—Petyr Baelish and Catelyn Stark

It was not my dagger. How many times must I swear to that? Lady Stark, whatever you may believe of me, I am not a stupid man. Only a fool would arm a common footpad with his own blade.[8]

He wondered which of them had sent the footpad to silence the Stark boy, and whether they had truly conspired at the death of Lord Arryn. If the old Hand had been murdered, it was deftly and subtly done. Men of his age died of sudden illness all the time. In contrast, sending some oaf with a stolen knife after Brandon Stark struck him as unbelievably clumsy.[21]

Joffrey: You and Lady Sansa owe me a better present, Uncle Imp. This one is all chopped to pieces.


Tyrion: Perhaps a knife, sire. To match your sword. A dagger of the same fine Valyrian steel ... with a dragonbone hilt, say?


Joffrey: You ... yes, a dagger to match my sword, good.[16]
—Joffrey Baratheon and Tyrion Lannister

Cersei: Joffrey had no love for Robb Stark, but the younger boy was nothing to him. He was only a child himself.
Jaime: A child hungry for a pat on the head from that sot you let him believe was his father. Tyrion almost died because of this bloody dagger. If he knew the whole thing was Joffrey's work, that might be why ...[19]

Tyrion: Joffrey would have been a worse king than Aerys ever was. He stole his father's dagger and gave it to a footpad to slit the throat of Brandon Stark, did you know that?
Jaime: I ... I thought he might have.[20]