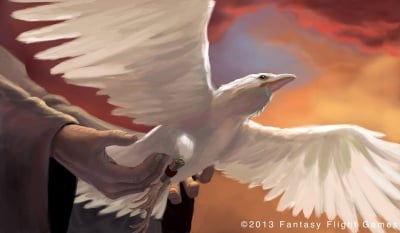 White ravens are a species of bird rarer than black ravens. They are reared at the Citadel in Oldtown.

White ravens are not albino, but a separate species from black ravens. This is known because they have bright black eyes. White ravens are larger and more intelligent than their black counterparts, and can be larger than hawks.[1] Like black ravens, white ravens can croak words.[1][2]

White ravens are sent by the maesters of the Citadel exclusively to announce the changing of the seasons.[3] White ravens and black ravens are kept in separate rookeries, otherwise they fight each other.[4] The white raven rookery is located in the west tower on the Isle of Ravens, at the Citadel in Oldtown.[4]

Because white ravens were released two days before his birth in 57 AC, Baelon Targaryen was known as the Spring Prince.[5] A maester and a white raven, by Thomas Denmark © Fantasy Flight Games

A white raven arrives at Dragonstone from the Citadel with a message declaring the end of summer. Maester Cressen shows the bird to Princess Shireen Baratheon.[1]

The Citadel novice Pate helps tend the ravens as an assistant to Archmaester Walgrave at the Ravenry. The white ravens know Pate's name, and often mutter it to each other whenever they see him. The white ravens are Walgrave's pride, and he wants them to eat him when he dies.[11]

Ser Kevan Lannister arrives at Grand Maester Pycelle's chambers at the Red Keep and finds a white raven sitting on the window ledge, a sign from the Citadel that winter has come.[12]

Shireen: Mother said the white raven means it's not summer anymore.
Cressen: That is so, my lady. The white ravens fly only from the Citadel. They are larger than other ravens, and more clever, bred to carry only the most important messages. This one came to tell us that the Conclave has met, considered the reports and measurements made by maesters all over the realm, and declared this great summer done at last. Ten years, two turns, and sixteen days it lasted, the longest summer in living memory.[1]

The white ravens and the black ones quarrel like Dornishmen and Marchers, so they keep them apart.[4]

The white ravens of the Citadel did not carry messages, as their dark cousins did. When they went forth from Oldtown, it was for one purpose only: to herald a change of seasons.[12]