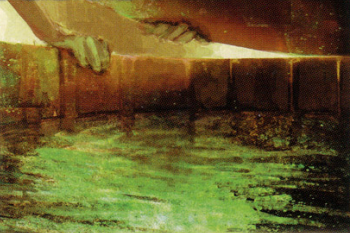 The lid of a vat of wildfire is lifted. © FFG 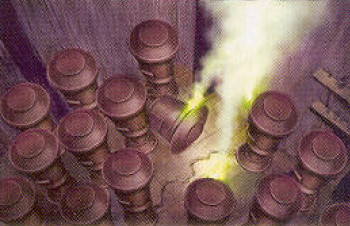 A cache of wildfire. © FFG 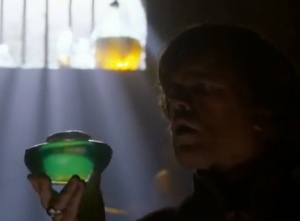 Tyrion Lannister holding a jar of wildfire in Game of Thrones.

Wildfire is a volatile,[1] flammable liquid which can burn for a long time once set on fire. It is created by the Alchemists' Guild, who refer to it as the substance and keep its recipe a close-guarded secret.[2] Wildfire has a green flame when it burns.[3][4] Wildfire is said to be a close cousin to dragonflame.[1]

Wildfire is a murky green liquid.[2] Once set aflame, the wildfire will burn with dark, emerald and jade green flames.[2][3][5][6][7][1] Cold will thicken liquid wildfire, but heating it will make the liquid flow.[2]

Wildfire is considered a treacherous substance.[8] Once it takes fire, it will burn for a long time, beyond the control of men.[3] Even a thin layer of wildfire will burn for an hour.[2] Wildfire can burn on water,[9][4][10] and seeps into most materials, like cloth, wood, leather, and steel, which will then go up in flames.[2] The pyromancers claim that only dragonflame, the fires beneath the earth, and the summer sun burn hotter than wildfire.[8]

Age impacts wildfire as well.[2] While it is implied that new wildfire can still somewhat be controlled, as claimed by the alchemists,[7] old wildfire is 'fickle'; any flame or spark can set them off. Too much heat—such as being exposed to sunlight for even a short time—could lead to a fire. Once the fire begins, the heat will make the liquid wildfire expand violently.[2] Older jars of wildfire are transported from place to place only by night, in carts filled with sand to lessen jostling at all, and then sealed in wax and placed in rooms pumped full of water.[2]

Making wildfire is a lengthy and dangerous process known only to the Alchemists' Guild, who claim it involves magic. According to Wisdom Pollitor, the spells used for making wildfire are presently not as effectual as they once were, due to the extinction of the dragons and the effect this has on the strength of magic.[11]

Wildfire is prepared by trained acolytes in bare stone cells. They place the wildfire in small jars of pottery, the clay roughened and pebbled to improve grip. During the days of King Aerys II Targaryen, jars shaped in the form of fruits were used. Once a jar is filled, an apprentice removes it from the stone cell and brings it down to the long, dank vaults. Above the work cells are rooms filled with sand. If a mishap causes the wildfire to burn in one of the work cells, a "protective spell" will cause the ceiling to collapse, allowing the sand to immediately extinguish the blaze.[2]

In 174 AC, King Aegon IV Targaryen tried to conquer Dorne using seven wooden "dragons" fitted with pumps that shot jets of wildfire. The attempt was a complete failure, as these "dragons" went up in flame in the kingswood in route to Dorne.[12]

During the Great Spring Sickness, Lord Brynden Rivers commanded the pyromancers to burn the victims of the disease in the Dragonpit with wildfire.[13]

In 232 AC, Prince Aerion Targaryen drank wildfire believing it would transform him into a dragon.[14][15]

Wildfire was involved in the Tragedy at Summerhall of 259 AC.[16]

By the end of his reign, King Aerys II Targaryen became fascinated with wildfire.[1] After the defeat of the royal army at the Battle of the Bells, Aerys realized how big of a threat to his rule Robert Baratheon was. He commanded his pyromancers to place caches of wildfire all over King's Landing, as the king was willing to burn the whole city rather than letting the rebel take it.[10] When his Hand of the King, Lord Qarlton Chelsted, discovered the plan, he tried to reason with the king without success. At the end, Aerys had him dipped in wildfire and burned him alive.[10][17][18]

Remnants of King Aerys II's wildfire plot were, at times, discovered during the reign of King Robert I Baratheon. In 298 AC, two hundred jars were discovered in a storeroom beneath the Great Sept of Baelor, and safely removed by the pyromancers.[2]

One of Lord Rossart's caches of wildfire, containing more than three hundred jars, is found below the Dragonpit.[11]

Tyrion Lannister uses wildfire provided by the Alchemists' Guild to defend King's Landing during the Battle of the Blackwater.[2][19]

Cersei Lannister has the alchemists burn the Tower of the Hand with wildfire.[8]

The substance flows through my veins, and lives in the heart of every pyromancer. We respect its power.[2]

Once it takes fire, the substance will burn fiercely until it is no more. More, it will seep into cloth, wood, leather, even steel, so they take fire as well.[2]

Piss on wildfire, and your cock burns off.[19]

The flames are so pretty. I want to watch them for a while.[8]

According to George R. R. Martin, wildfire is inspired by Greek fire.[20]