Willas Tyrell is a member of House Tyrell and the eldest son of Lord Mace Tyrell and Lady Alerie Hightower. He is the heir to Highgarden.[3]

Willas is crippled, with a bad leg. He is described as intelligent,[4] studious, educated, and kind, and is renowned for breeding the finest hawks, hounds, and horses in the Seven Kingdoms.[5][6] He sometimes hawks with an eagle.[7] Willas is also described as mild and courtly, fond of reading books and looking at the stars.[6] Petyr Baelish considers Willas to be gentle, pious, and good-hearted, but also boring.[8]

Willas is the eldest son of Mace Tyrell, Lord of Highgarden, and Lady Alerie Hightower. During his first tourney, which Willas entered as a squire[2] of a young age due to his father's wishes, he competed against Prince Oberyn Martell of Dorne, who knocked Willas from his horse. Unfortunately, Willas's foot caught in his stirrup as he fell, and he pulled his horse on top of him, crushing his leg and leaving him a cripple.[9]

Though the incident fanned the flames of the considerable and historical enmity between Houses Tyrell and Martell, Willas bore Oberyn no personal ill will, and the two long remained in correspondence, sharing a passion for horseflesh.[9] Ever since his accident, Willas has occupied himself with scholarly studies, as he cannot be a knight.[10] Willas's grandmother, Olenna Tyrell, despite having a low opinion of her son Mace, has a high opinion of her grandson.[5]

His younger brother, Garlan, was plump as a boy. To protect him from a potential denigrating nickname, such as given to his uncle Garth "the Gross", Willas was the first to call him "Garlan the Gallant".[11] When Willas's sister Margaery was a girl, he would often read to her and draw her pictures of the stars.[5]

Princess Arianne Martell once considered marrying Willas, but her father Prince Doran refused to send her to Highgarden to meet him. Nevertheless, she tried to travel there on her own, with the help of her cousin Tyene Sand, but her uncle Prince Oberyn Martell caught them at Vaith and brought them back to Sunspear.[12] 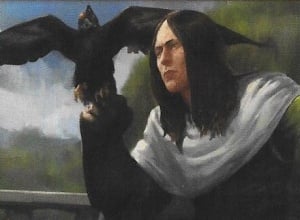 In King's Landing, Willas Tyrell is ordered to swear fealty to the new king Joffrey Baratheon, along with his father, brothers, and uncles.[13]

In King's Landing, Lady Olenna Tyrell plots to have Sansa Stark married to her grandson Willas.[5] Sansa readily accepts the offer of betrothal, but the plot is foiled after she reveals the information to Dontos Hollard in the godswood of the Red Keep.[7] Lord Tywin Lannister learns of the plot from Lord Petyr Baelish, and hastily marries Sansa to his son Tyrion.[6][11]

Tywin further offers his daughter, Queen Regent Cersei Lannister, to be married to Willas, in order to quiet the rumors of her incest with her brother, Ser Jaime.[6] Though Mace Tyrell appears to be interested, his mother Olenna convinces him otherwise, and the Tyrells refuse the offer.[14]

In King's Landing, Lord Mace Tyrell dismisses Queen Regent Cersei Lannister's suggestion that he is needed in the Reach, saying his son Willas is able and intelligent.[4]

After the taking of the Shields by the ironborn, Willas reportedly sends messengers to Lord Leyton Hightower, ordering him to strengthen his defenses in Oldtown. Willas also guesses correctly that the ironborn did not follow the coast when attacking the Shield Islands in order to take the lords of the Shields off guard. However, Queen Cersei dismisses his reports, preferring to believe he was incompetent and making excuses. Cersei also refuses to send the Redwyne fleet to transport the army Willas is raising, until the siege of Dragonstone is won.[15]

In Sunspear, Princess Arianne Martell recalls her many failed betrothals, including the time she tried to travel to Highgarden to meet with Willas.[12]

In King's Landing, at a meeting of King Tommen Baratheon's small council, Mace Tyrell is confident that once Paxter Redwyne's fleet sweeps the ironmen from the seas, his sons Willas and Garlan will easily retake the Shield Islands. When Mace says a better marriage match should be made for Princess Myrcella Baratheon than Trystane Martell, Tommen's regent Kevan Lannister thinks that Mace wants to marry Willas to her.[16] 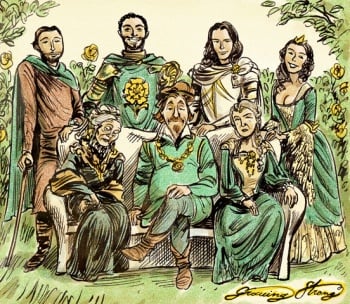 We were speaking of my grandson Willas. He is a bit old for you, to be sure, but a dear boy for all that. Not the least bit oafish, and heir to Highgarden besides.[5]

Willas has a bad leg but a good heart.[5]

When I first broached the match to him, Lord Tyrell seemed well enough disposed. A day later, all was changed. The old woman's work. She hectors her son unmercifully. Varys claims she told him that your sister was too old and too used for this precious one-legged grandson of hers.[6]

The Fat Flower thrust him into tourneys at too tender an age, just as he did the other two. He wanted another Leo Longthorn, and made himself a cripple.[9]

Gentle, pious, good-hearted Willas Tyrell. Be grateful you were spared, he would have bored you spitless.[8]