From A Wiki of Ice and Fire
(Redirected from Wolves)
Jump to: navigation, search 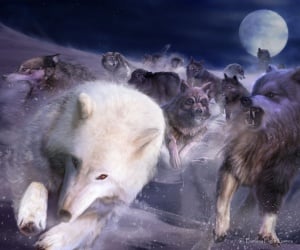 Wolves of the North by Tiziano Baracchi © Fantasy Flight Games

The wolf is similar to a real life wolf. Direwolves are a stronger and larger breed than the common wolf.[1] 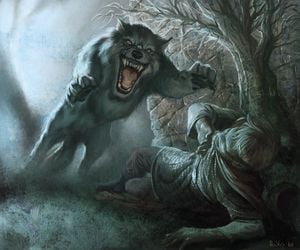 Wolves can be found in the forests of Ib,[2] the Forest of Qohor,[3] and the forests of Westeros, such as the wolfswood[4] (named for the great many wolves one can hear howling in the night), the White Wood,[5] and on Bear Island.[6] Wolves live in the red waste,[7] and red wolves can also be found in Essos.[8]

Wolves live and hunt together in groups called packs. Due to the size and strength difference, a direwolf can establish dominance over a pack of common wolves.[9][10] Wolf fur can be red, brown, or grey.[11][8]

Like direwolves, common wolves can form a magical bond with a warg.[12][13] 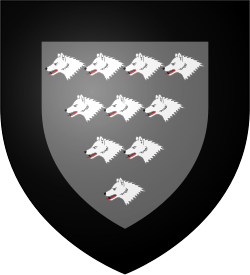 The sigil of House Cassel depicts wolves' heads.[15] Men of the north can be called wolves because of the direwolf on the Starks' sigil.[16][17][18][19][20] Starks who show a certain wildness have been described as having the "wolf blood".[21][12][22] Due to their sigil, several historical Starks received wolf-based nicknames:

In Westeros, the blackest part of night is refer to as the hour of the wolf.[26]

Wolfsbane is a poison.[27] "Wolves in the Hills" is a popular song in the Northern mountains.[28]

Ironborn raiders have been called the "wolves of the sea" by men of the westerlands and riverlands.[29][30]

In antiquity, wolves made their lairs within the Rock.[31]

According to songs and legend, the children of the forest controlled armies of wolves and sent them against Andal invaders.[5]

King Jon Stark raised the Wolf's Den to defend the mouth of the White Knife from raiders from the sea.[32]

The War of the Wolves was a conflict between a King of Winter from House Stark and Gaven Greywolf.[33]

Gorm the Wolf was a chieftain of the free folk who ruled Hardhome.[34] 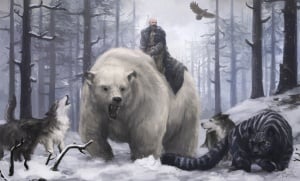 The wife of Lord Alaric Stark killed two wolves with her axe in her youth and used their skins to sew a cloak.[6]

Ser Corlys Velaryon captained the Ice Wolf when he sailed the Shivering Sea.[35]

During the Dance of the Dragons, Lord Roderick Dustin led a host of two thousand northmen who called themselves the Winter Wolves.[20] At the end of the war, Lord Cregan Stark took control of King's Landing during a period remembered as the Hour of the Wolf.[36] In the aftermath of the conflict, a sellsword company consisting exclusively of northmen, called the Wolf Pack, was founded by Hallis Hornwood and Timotty Snow.[37]

Sandoq the Shadow was a veteran pit fighter in Meereen, who fought against men and animals, including wolves.[38]

Varamyr, a skinchanger, was able to gain control of wolves.[39]

When Robb Stark rides to war, his guards insist upon calling him the Young Wolf.[40] Robb is proclaimed King in the North after the Battle of the Camps.[41]

The direwolf Nymeria takes control over a pack of common wolves.[42] Lord William Mooton and his sons track the pack to their lair, but the Mootons are forced to flee.[42] then Lord Roose Bolton nearby Harrenhal.[22]

After the fall of Harrenhal to Lord Roose Bolton,[43] Septon Utt's men are attacked by bold wolves.[22] Roose goes hunting and manages to kill nine wolves. He orders his men to sew the skins of the adults into a blanket for his bed, and to make gloves with the softer fur of the pups.[22]

Rymund the Rhymer writes a song called "Wolf in the Night" about Robb's victory at the Battle of Oxcross.[44]

Jojen Reed tells Bran Stark he had a green dream of a winged wolf, which he claims is Bran.[45]

Jojej and his sister Meera tell Bran about the tourney at Harrenhal and the Knight of the Laughing Tree. The Reeds refer to a wild wolf, a quiet wolf, a she-wolf, and a wolf pup.[46]

Nymeria's pack has grown to a great pack of hundreds of wolves who prowls the Trident.[47] Some are still afraid of men,[48] but others have become more aggressive under the leadership of the female direwolf and have killed horses and men.[49][9]

It's been a bad year for wolves. Around the Gods Eye, the packs have grown bolder'n anyone can remember. Sheep, cows, dogs, makes no matter, they kill as they like, and they got no fear of men. It's worth your life to go into those woods by night.[42]

—a traveller to an innkeeper

Roose: It is wolves I mean to hunt. I can scarcely sleep at night for the howling. It's said that direwolves once roamed the north in great packs of a hundred or more, and feared neither man nor mammoth, but that was long ago and in another land. It is queer to see the common wolves of the south so bold.
Qyburn: Terrible times breed terrible things, my lord.[22]