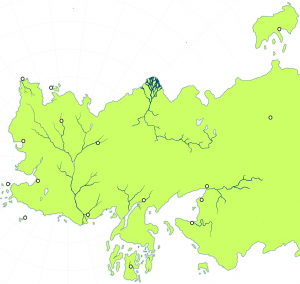 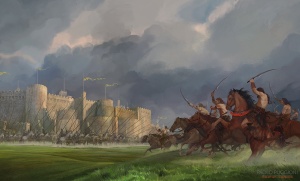 The attack on Sathar - by Paolo Puggioni ©

Yalli Qamayi is a ruined city in Essos in the southeastern Kingdom of Sarnor, bordering the central Dothraki sea. Located at the confluence of two branches of the Sarne,[1] it is east of Vojjor Samvi and south of Vaes Leqse.[2] It was originally called Sathar, but it is now known by its Dothraki language name, Yalli Qamayi, meaning "Wailing Children".[3]

Sathar, the Waterfall City, was said to have been the loveliest of the grassland cities of the Tall Men.[1] During the Century of Blood following the Doom of Valyria, however, it was the first city of the Kingdom of Sarnor to be burned by Dothraki. Its men were put to the sword and its women and children were taken as slaves, with three-quarters of them dying during the march to Hazdahn Mo. Khal Moro renamed the ruins "Yalli Qamayi". Three days ride west of Sathar, the kings of Kasath and Gornath fought each other in an attempt to claim the city's spoils.[1]

Daenerys Targaryen travels north of Yalli Qamayi during the journey of Khal Drogo's khalasar from Pentos to Vaes Dothrak.[4]