Yunkai, also called the Yellow City,[1] is one of the Slaver Cities on the eastern coast of Slaver's Bay in central Essos. Ruled by the Wise Masters, Yunkai's main export is bed slaves.[2] It is said to be a disreputable place.[3] Yunkai is also referred to as the queen of cities,[2] a title also claimed by Qarth.[4]

The Yunkish emblem is a variation on the harpy of Old Ghis: a woman's torso, wings of a bat instead of arms, legs of an eagle and a scorpion's tail. Its talons grasp a whip and an iron collar.[2]

Yunkai
Slaver's Bay and the location of Yunkai

Yunkai is located on Slaver's Bay.[5][6] One hundred leagues to the south, following the old Ghiscari coastal road, is Astapor and about fifty leagues – at least a hundred and sixty-three miles[7] – to the north Meereen. Well mounted travellers, when riding hard, can reach Yunkai from Astapor in six days.[8] To the southwest of Yunkai is the island Yaros.[6] 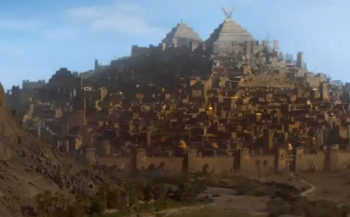 Yunkai as seen in Game of Thrones

Yunkai is made of yellow bricks, with crumbling walls, towers, and tall, stepped pyramids.[2] These include the golden pyramid of Qaggaz.[9] A great harpy is mounted above the city's gates.[2] 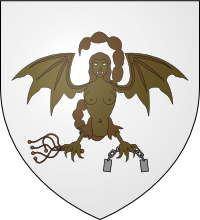 The Yunkai'i speak a dialect of High Valyrian, different from Astapor's, but similar enough.[2]

Yunkai is ruled by slavers called the Wise Masters,[2][3] who are considered to be cunning[10] and corrupted.[3]

The highborn warriors of Yunkai wear linen skirts and tunics dyed a deep yellow and cloaks sewn with copper disks. They oil their hair and twist it into towers and shapes, and wear tall helms to preserve the stylings.[2] The nobility wear fringed tokars,[2] a sign of power, as they do in Astapor and Meereen.

The Yunkai'i ride horses and camels.[2] The city's walls are defended by crossbowmen and slingers.[2]

Yunkai can field an army of roughly five thousand men, all slaves.[2]

Coins from Yunkai include the golden marks, brightly shining coins stamped with a stepped pyramid on one side and the harpy of Ghis on the other.[2]

Yunkai was a colony of the Old Empire of Ghis. Yunkai survived the destruction of Old Ghis at the hands of the Valyrian Freehold, and was subsequently conquered by the Valyrians, who learned slavery from the conquered Ghiscari and used slaves to expand their empire.[12] After the Doom of Valyria and the fall of the Freehold, the Ghiscari of Slaver's Bay took control of the slave trade.[3] During the centuries that followed, Yunkai and her sister cities Meereen and Astapor were the linchpins of the slave trade.[4]

A Triarch of Volantis named Vogarro purchased a pleasure slave trained in the seven sighs in Yunkai. Vogarro fell in love with her, freed her, and married her, raising a great scandal. When Vogarro died his widow remained in Volantis, where she still continues to wield power.[13]

Khal Pono's khalasar rides to the Slaver Cities to sell thousands of slaves.[14]

As part of her campaign in Slaver's Bay, Daenerys Targaryen marches on Yunkai following the fall of Astapor. Having learned about the faith of Astapor, the Wise Masters of Yunkai supplement their defense with sellswords.[2] The Wise Masters attempt to convince Daenerys to leave their city by having Grazdan mo Eraz offering her fifty thousand golden marks to leave Slaver's Bay and head to Westeros. Daenerys rejects the offer.[2]

Daenerys defeats the city in a battle near Yunkai, turning the Second Sons and the Stormcrows in their service to her side.[2] After Yunkai's surrender and the liberation of all slaves in the city, Daenerys decides not to sack the city but instead to march further towards Meereen.[7] After having conquered Meereen, Daenerys receives an envoy from Astapor, Lord Ghael, who informs Daenerys that Cleon, the new king in Astapor, desires an alliance between Meereen and Astapor against Yunkai.[15]

After Daenerys's departure, Yunkai returns to slaving[1] and begins preparing for the next conflict by hiring other sellswords, such as the Long Lances, the Windblown, and the Company of the Cat.[16] Their envoys travel to Qarth and other free cities spreading false tales about Daenerys in order to gain support to cast her down. Grazdan mo Eraz travels to Volantis to persuade the triarchs to send their fleet against Daenerys, and other envoys ally Yunkai with New Ghis, Tolos, Elyria, and Dothraki.[10] The queen sends the Stormcrows to scout the Yunkish hinterlands.[17]

Yunkai besieges Astapor in an effort to topple the regime that had come into power after Daenerys had sacked that city.[16] Prince Quentyn Martell, one of the Windblown, witnesses the siege of Astapor and its sacking.[8]

The Yunkish army is commanded by squabbling, wealthy lordlings[N 1] who have brought slave hosts of various sizes. Yurkhaz zo Yunzak has the supreme command of the Yunkishmen.[8] While some such as Yezzan zo Qaggaz favor peace with Meereen, most of Yunkai'i want to attack the city, despite the Volantenes not having arrived yet.[18] The Second Sons defect from Daenerys to the Yunkai'i.[19]

Daenerys makes peace with Yunkai and exchanges hostages.[20] Yunkish envoys attend the reopening of Meereen's fighting pits, but Yurkhaz is killed[21] in the turmoil at the Great Pit of Daznak after Dany disappears atop Drogon.[22] The Yunkai'i, now led by a council of masters, kill three hostages and demand that King Hizdahr zo Loraq have the queen's dragons killed.[21] Yezzan has the most support for supreme command but he then dies of the pale mare. The Wise Masters rotate the supreme command amongst themselves with the generals taking a turn each day.[21] They provide the Windblown, and presumably their other sellsword companies, with a chart for the rotation.[23]

The Iron Fleet captures a few merchant and slaving vessels near Yaros and Yunkai.[24]

In the Great Pyramid of Meereen, Skahaz mo Kandaq informs Ser Barristan Selmy, Hand of the Queen to the missing Daenerys, that the Yunkai'i have resumed their siege.[25]

Ancient and glorious is Yunkai, the queen of cities. Our walls are strong, our nobles proud and fierce, our common folk without fear. Ours is the blood of ancient Ghis, whose empire was old when Valyria was yet a squalling child.[2]

Astapor was complacent and vulnerable. Yunkai is forewarned.[2]

I spared Yunkai before, but I will not make that mistake again. If they should dare attack me, this time I shall raze their Yellow City to the ground.[4]

With their generals, it's a wonder they don't march into the sea.[8]

—Beans to the Windblown

Of Yunkai, the yellow city, little needs be said, for it is a most disreputable place. The men who rule it, calling themselves the Wise Masters, are steeped in corruption, selling bed slaves and boy-whores and worse.[3]

Chapters which take place at Yunkai